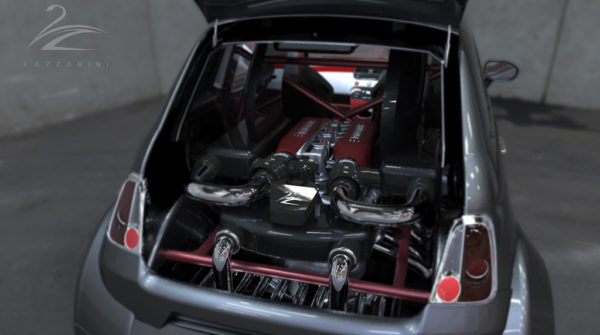 The folks at Lazzarini Design are at it again. After replacing a four cylinder turbo motor in the Alfa Romeo 4C with a lunatic 4.3-liter V8 from the F430, they’ve decided to inject the cute looking Fiat 500 with some lethal madness. Such pandemonium on wheels will be extremely rare though, as only one such example will be made. So now you know what made them call it the Fiat 550 Italia Prototipo Uno. 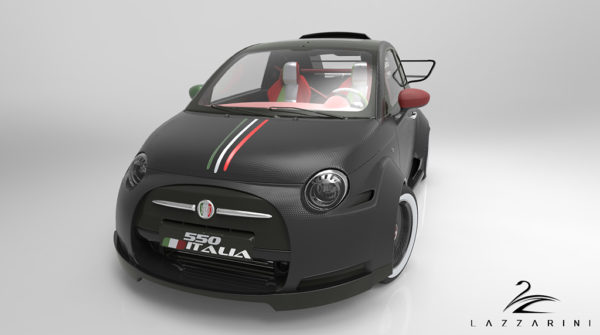 In order to accommodate a large hearted Ferrari F136FB V8 in the tiny Fiat, Lazzarini blew the rear to make it wider by 350mm at the rear and 250mm at the front, in comparison to a stock Cinquecento. The original 2300 mm wheelbase of the Fiat 500 has been increased by about 350mm to align the transmission and accommodate the large V8 which could produce nearly 550 bhp when breathing normally, or more than 700 horses with the help of additional breathing equipment. 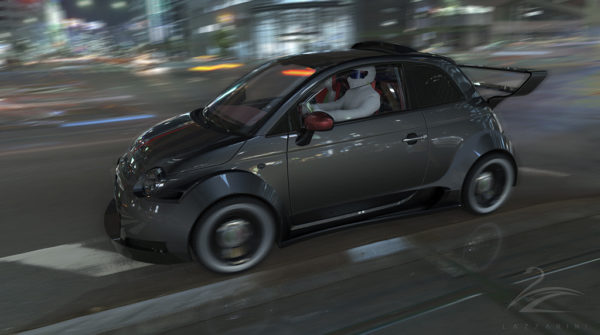 Seating and everything else at the rear has been removed along with the originally front mounted motor to keep weight below 850 kilos. The rear block, including suspension differential, gearbox and transmission are also borrowed from Maranello’s car. The turbocharging system is fed its dose via some scoops on the roof and two other vents located under the car. Whether this ant sized monster will be street legal or restricted to the tracks could be anybody’s guess. However, madness comes at a cost and this one will set you back by half a million and another fifty thousand dollars.