There are a lot of things which make middleweight ADV-tourers strike a chord with several motorcyclists looking for an adventure-filled life with their motorcycle. They aren’t as heavy as their bigger and badder cousins while also being much more manageable off the road. Even beginner ADV motorcyclists don’t find them hard to manoeuvre when the going gets tough. They pack decent performance to keep you entertained while also providing a well-woven safety net of electronics. India has had the privilege to get some revered middleweight ADV-tourers.

But if there’s one acclaimed ADV-tourer we would like to see here is the Yamaha Tenere 700. The Rally inspired ADV-tourer looks like it was built for just one purpose: Bringing Rally bike like finesse to a road-going ADV-tourer. We might not be lucky enough to swing our legs over this Japanese adventure motorcycle but Europe has recently received the Ténéré 700 Rally Edition. 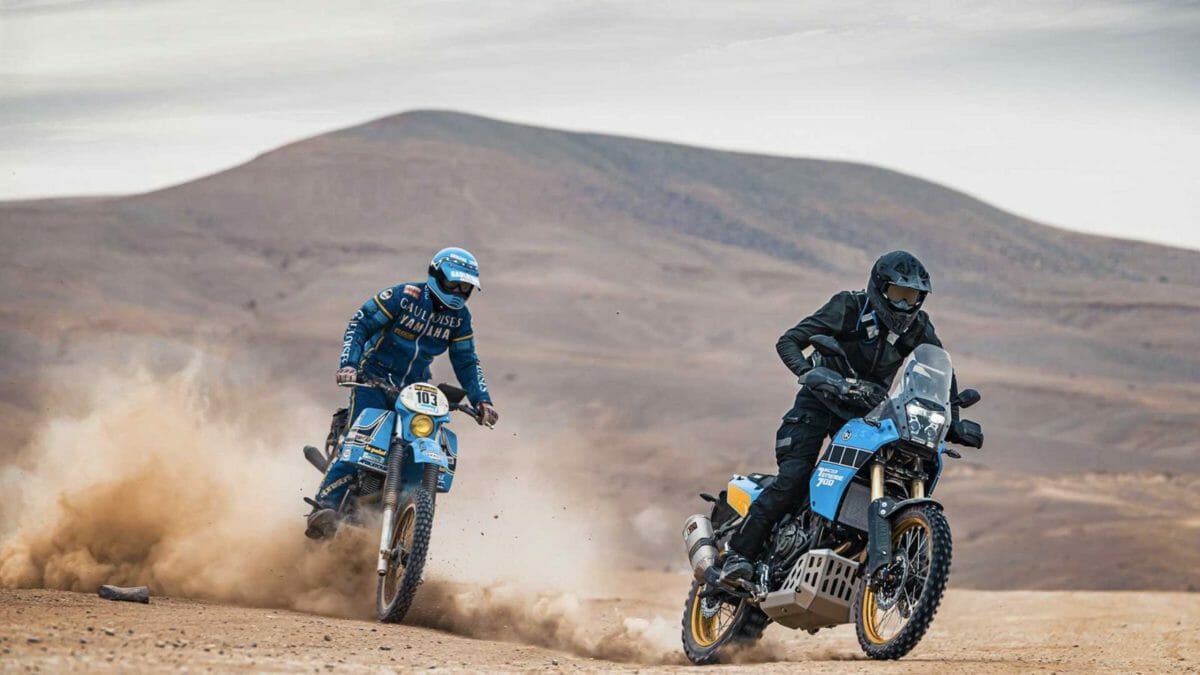 Let’s introduce you to Tenere first. It’s Yamaha’s take on a middleweight ADV-tourer and is widely acclaimed around the world for its off-road capabilities and rally-inspired looks. It draws power from a 689cc Crossplane twin (CP2)  engine which is an absolute treat. On paper, it makes 72 horsepower at 9000 rpm and 67.79 nm of torque at 6500 rpm. These numbers might not be earth-shattering because its rivals make considerably more power. But in the defence of Tenere, it all comes down to the way the power is put down on the road. Take this, for instance, it shares the same engine with the manic MT-07! 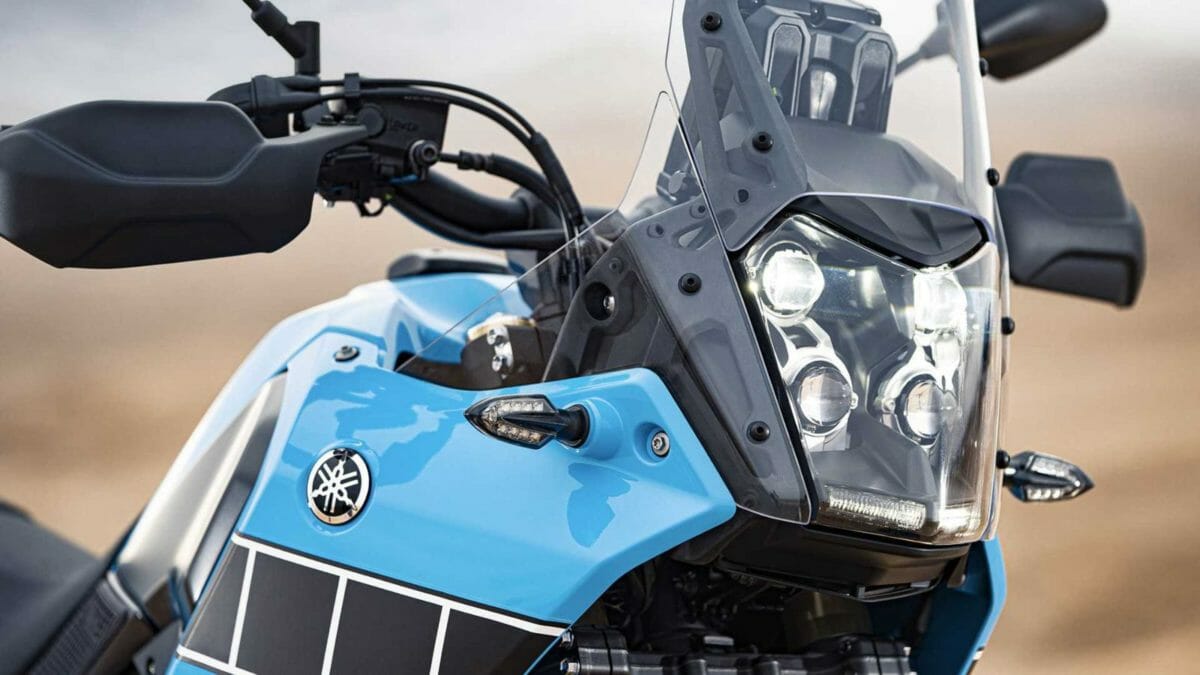 Not only does the 270-/450-degree firing order reduce inertial torque for a smooth and tractable power delivery, but the low rpm growl is formidable. The 21-inch front wheel lends it exceptional off-road capabilities. What accentuates its capabilities even further is its suspension setup. Suspension duties are taken care of by 43mm open-cartridge fork by KYB that accommodates over eight inches of travel. The shock is also fully adjustable, providing nearly eight inches of travel, and has a handy knob for quick spring-preload adjustments. It comes shod with  Pirelli Scorpion Rally STR rubber which is known to strike a perfect balance between on-road riding and trail bashing. 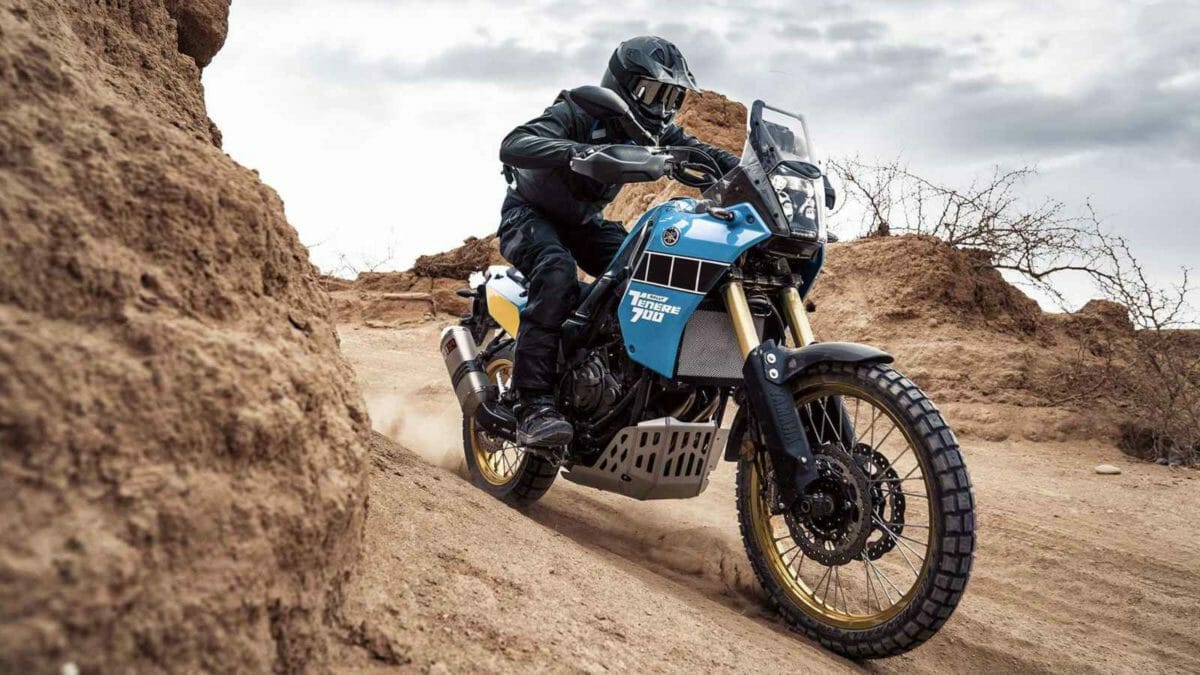 The Rally Edition’s most prominent visual change is the special blue and yellow livery that pays homage to the Yamaha race bikes ridden by JCO and Serge Bacou in the ’83 and ’84 editions of the Dakar rally. It was inspired by the XT600Z of 1983 that is complete with black Yamaha ‘speedblock’ graphics. The Rally Edition isn’t just cosmetically different but features a host of adventure and off-road parts too. When it comes to the protection, it gets a new 4mm think aluminium bash plate protecting the engine and lower-frame rails, black aluminium rad guard, and an aluminium laser-cut chain protector.

It also gets a tweaked seat which is a newly constructed one-piece seat raising the rider by 20mm over stock – taking the seat height up to 895mm. Other addition includes grip pads on the tank, off-road hand grips, an Akrapovič slip-on muffler and LED turn signals. The 689cc parallel-twin remains unchanged; so are the long-travel suspension, brakes, and wire-spoke wheels.

Yamaha currently doesn’t have any ADV-tourer in our markets and if they decide to bring the Tenere 700 to India, it will surely disrupt the middleweight ADV-tourer segment. Japanese reliability, astonishing off-road capabilities accompanied by rally-inspired looks! Some off-road enthusiasts might be already salivating thinking about taking the Tenere 700 for some trail bashing!