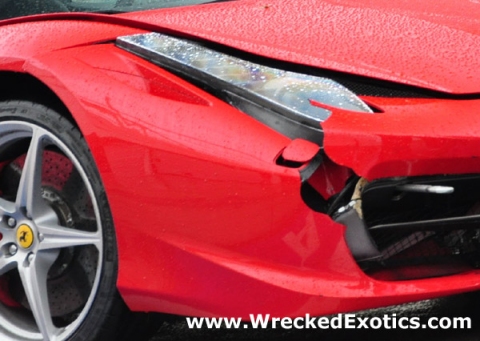 Supercars are pretty useless. You need to be either loaded with cash, come with a famous surname, join politics or be an international thug to own one. By the time, you achieve any of these feats you are 45- which means, by now you are already married, suffering from mid-life crisis and have pesky kids, who you wouldn’t mind selling off to Angelina Jolie or Madonna. All those impractical and ridiculous fantasies you had listed down in your ‘Things to do with/ in / on my super-car’ list when you were 21, may remain just that.

Therefore, Supercars are useless. Sharing a similar school of thought are a bunch of Ferrari owners. They seem to have teamed up and conspired to smash, crash, total- out and put fire on to as many Ferrari 458 Italias as they possibly can till eternity do them apart. We call them the members of the ‘The Secret Society of Ferrari 458 Italia Wreckers.’

These members have successfully destroyed seven of on of the finest creations on planet Earth- the Ferrari 458 Italia in a mere span of 4 months. Hell, some of us don’t even get laid at the rate. Please, for the love of everything that is Ferrari, expensive and painfully beautiful, we urge these wreckers to put an end to this at once.

And as a tribute to once formerly wonderful F458’s and those fellow buggers, who have made us cry, shout, wail and pop valium, we bring you the details, pics and dope on all the seven disasters which took place since May 2010 in chronological order.

Poland was the first place where the first Ferrari 458 met with its sad demise on the 24th of May, 2010 while it was just two months old. According to a witness, the Ferrari driver swerved to avoid a left- turning bus and struck the right rear quarter of a Volkswagen Bora. The wrecked Italia was wearing Austrian plates and was driven by a man in his early 20’s.

The Second and the Third one

The second Ferrari 458 Italia crashed on June 1, 2010. It was spotted on the back of a tow truck in Stiges, Spain and had been slapped with severe front- end damage. No word on whether it happened on road or on a track.

The third one in red to go down suffered front wing damage on a wet track in the Czech Republic.

The Fourth one goes up in Flames
This comes from Switzerland on the 14th of July, 2010. The F458 caught fire just above the left rear wheel. Sadly, there is no information on why or how exactly the car caught fire.
The Fifth one goes up in Flames too
This Ferrari formerly draped in black, got barbecued the same week the fourth one was reduced to scrap. Reported on 19th July, 2010 in Paris.
The Sixth One
And another one bites the dust or in this case, hugs the tree. A day earlier the unfortunate incident took place, this Ferrari was seen cruising through the streets of Maranello, the Pracing Horse’s home town. And a day later, it wasn’t. Fortunately, the big tree survived. This was reported on the 12th of August, 2010

Friday the 13th, and an another exquisite beauty in the form of a black F458 causes heartache in the UK. This one was reportedly hired by an unlucky driver at Ecurie25 rental company. The bugger hit a railing on the side of the road while trying his level best to impress a chick. We are damn sure the chick won’t see his face again and we can also safely infer that he is currently unemployed.