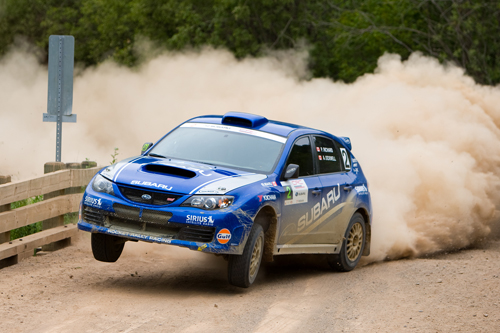 The video shared below is just too good to miss. And no, we are not just making it up so that you stay on this page for over a minute and half. It’s seriously mental and one of those rare moments in rallying where you think it’s all worth it.
It all happened at the 33rd Rally Baie des Chaleurs (BDC) 2010, held in New Richmond Town, Quebec, Canada. A canadian rally crew with driver Pat Richard and co- pilot Alan Ockwell achieved an extraordinary feat when they crossed the finish line with the windshield caved in, of their Subaru WRX STI and grabbed the first spot!
During a leg of the race, the Subaru rally car slips out of control and lifts its right side wheels off the ground, rolls, flips and ends up in bushes on the side of the road. Now, most drivers would go home and cry to their mama after such drama. But, Richard got out of car, gathered few people from nearby and rolled the car back on all four wheels and drove away to the finish line. All this, with the co -pilot still firmly planted in the car! What’s even more impressive is that the co- pilot Alan does not let the pen slip out from from his hand!
Watch the crazy action below:
News
,
Comments
Leave a Reply Cancel reply