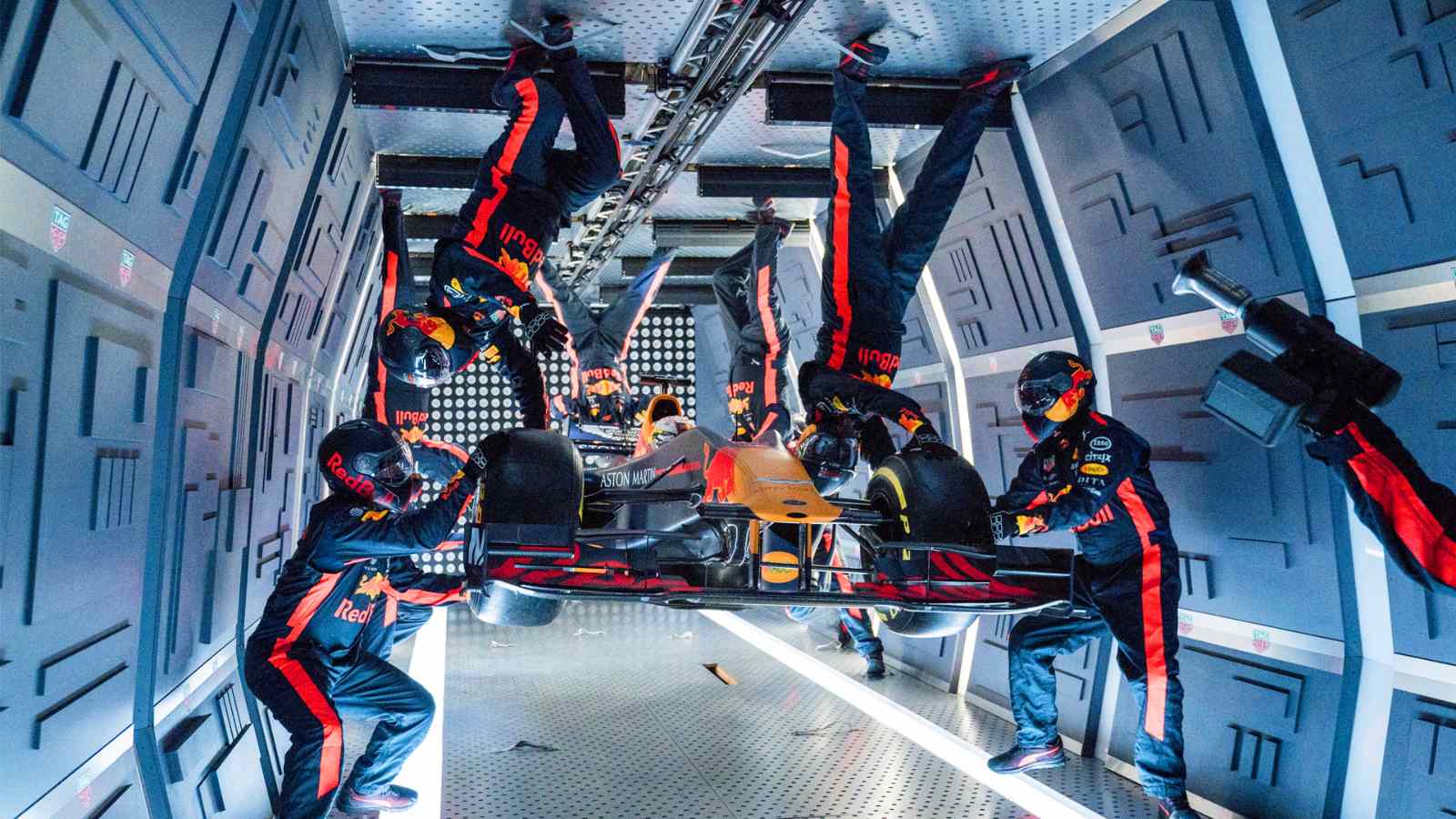 Red bull Racing has been a Formula 1 team since 2005. And in these 17 years, they have given the world of motorsport some absolutely epic moments to remember. Red bull Racing was a 4-time consecutive constructors’ and driver’s champion from 2010-2013 via the extraordinary driving skills of the German, Sebastian Vettel. From then on, they are still searching for another championship and their hopes are now pinned on one of the current best and youngest drivers, Max Verstappen who will be partnered by the impeccable Sergio Perez for the 2021 season.

Amid all the on-track action, Red bull has been the only team to do bonkers crazy stuff off the track and bring it closer to the people and set up a great promotional event. Here are some of the crazy antics done by Red bull ( in no particular order ) off the track and if at any time throughout this article if you think how on earth is this even possible, believe me, you are not alone.

Donuts atop the helipad of the 7-star Burj-al-Arab hotel in Dubai, 2013 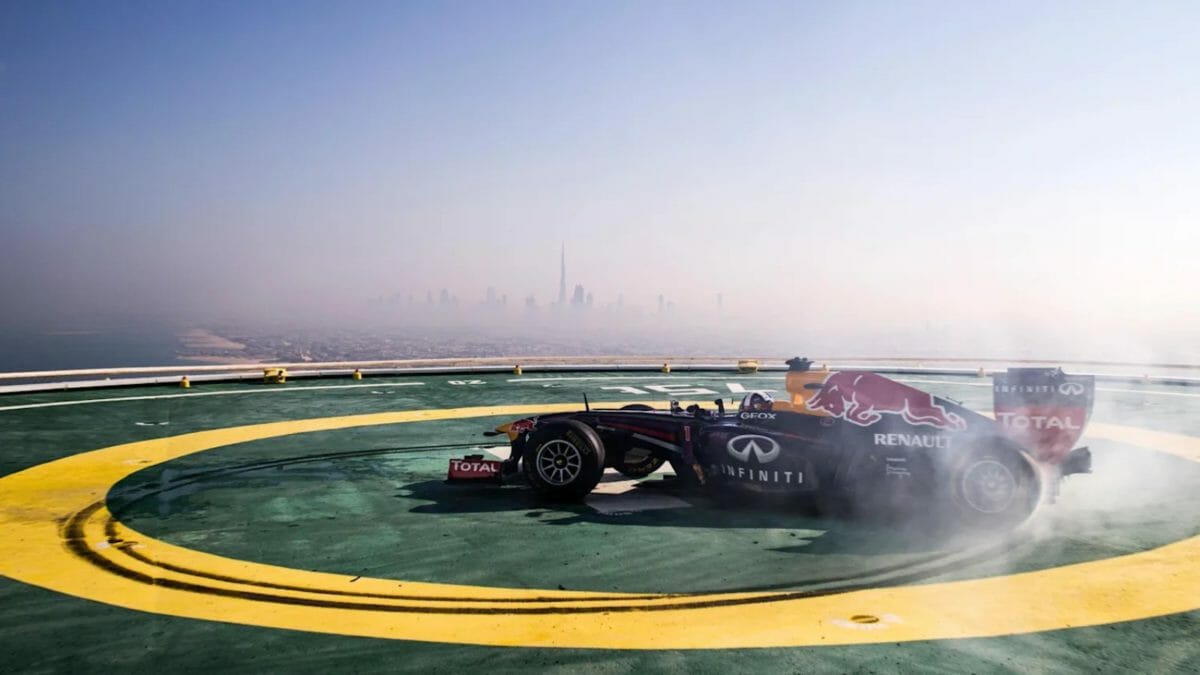 Red bull uses their cars from the pre-2014 era because of their V8s and David Coulthard ( former Redbull F1 driver ) was tasked with manning the grunt from a mad V8. There were no visible railings, no belts, no chains so one mistake and David drops 740 feet below to the ground. This was surely done in a controlled environment but even then, one tickle too much on the throttle, not enough countersteer and you are gone. The sheer risk of this mega task was blimey high but DC burned that rubber like the pro he is. 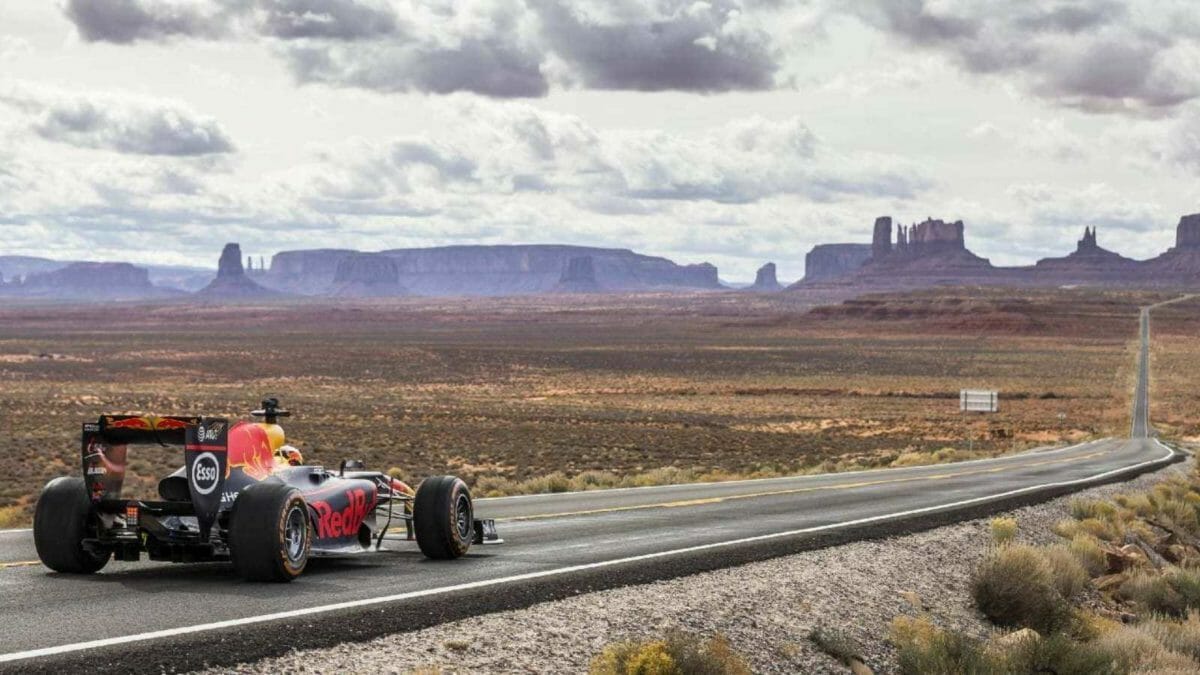 Red bull’s 2018 USA trip was one serious adventure. Spanning across Monument Valley in Utah, Continental Divide in Colorado, Las Vegas in Nevada and Miami in Florida. Then Red bull driver Daniel Ricciardo took charge of Utah and Vegas while Max drove through Colorado and Miami. Daniel jokingly remarks ‘oh yeah, sin city’ while driving in Vegas and if you’re driving in Vegas, the only better thing could be hearing one of the loudest V8s go past you. Daniel being Daniel again remarks ‘two words Max, Las Vegas’ when Max asks him why he was late for the reunion. 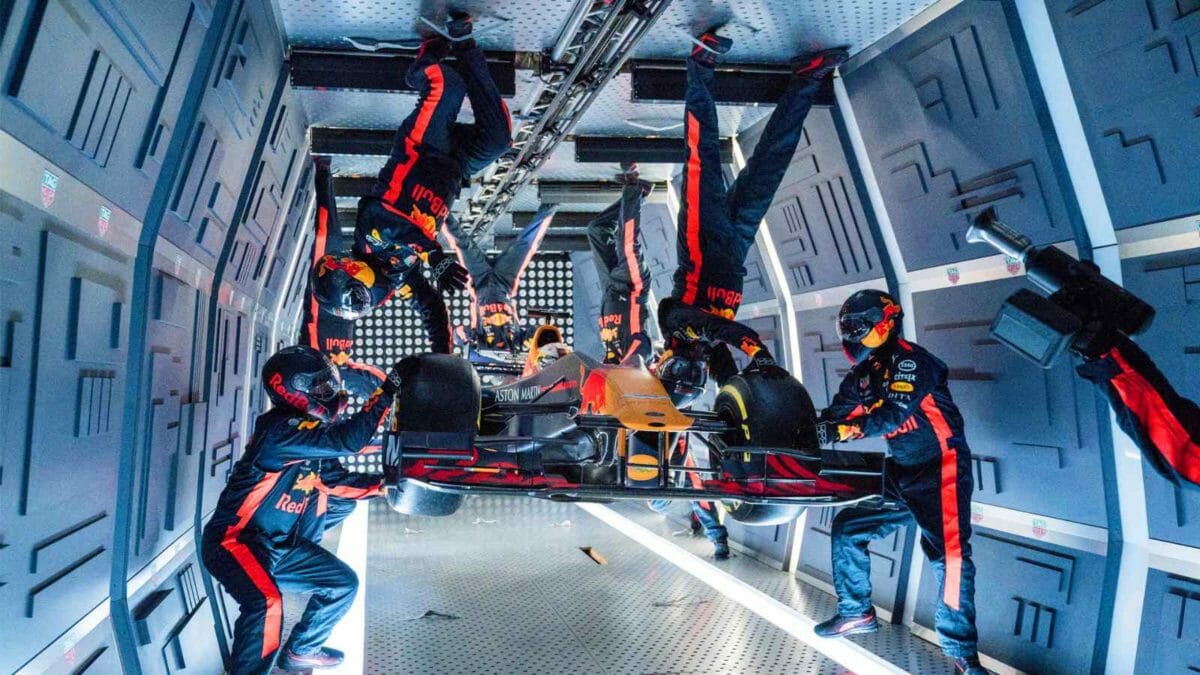 Red Bull pit crew is an absolute artist at doing a sub-2 seconds pit stop and probably being bored of doing that again and again, they took it a step further and made a pit stop in zero-gravity, a situation of weightlessness. With help from the Russian Space Agency, Red bull did an absolute marvel of a job 33,000 feet in the sky in a controlled aircraft environment. Just imagine yourself, everyone else, everything else because there is no gravity to put you on the ground and then make a pit stop. 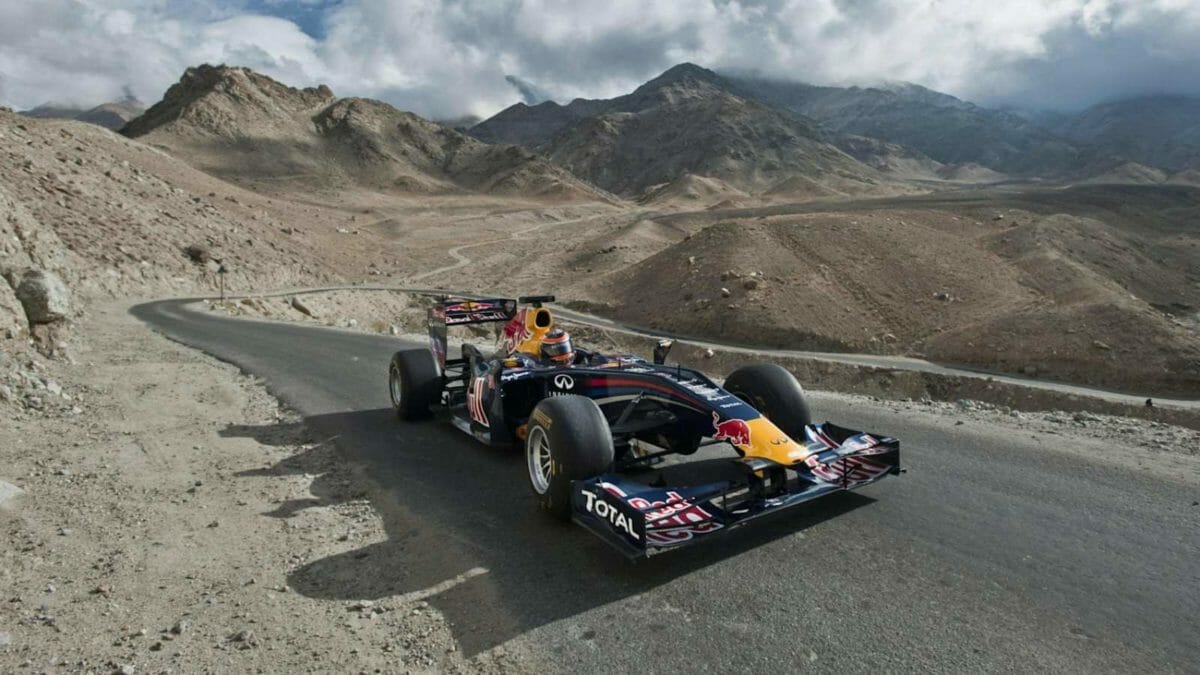 Khardung-La is one of the highest mountain passes sitting a staggering 17,582 feet from the sea level. With nature usually turning the temperature down below 0 degrees celsius, the Red bull crew had more than one thing to worry about. Altitude sickness, lack of air for the engine, keeping the engine and the tyres sufficiently warm, phew. But, pilot Neel Jani showcased his exhilarating skills behind the wheel of an F1 car to manoeuvre through one of the most difficult terrains for not just an F1 car, but any vehicle for that matter. This was serious. 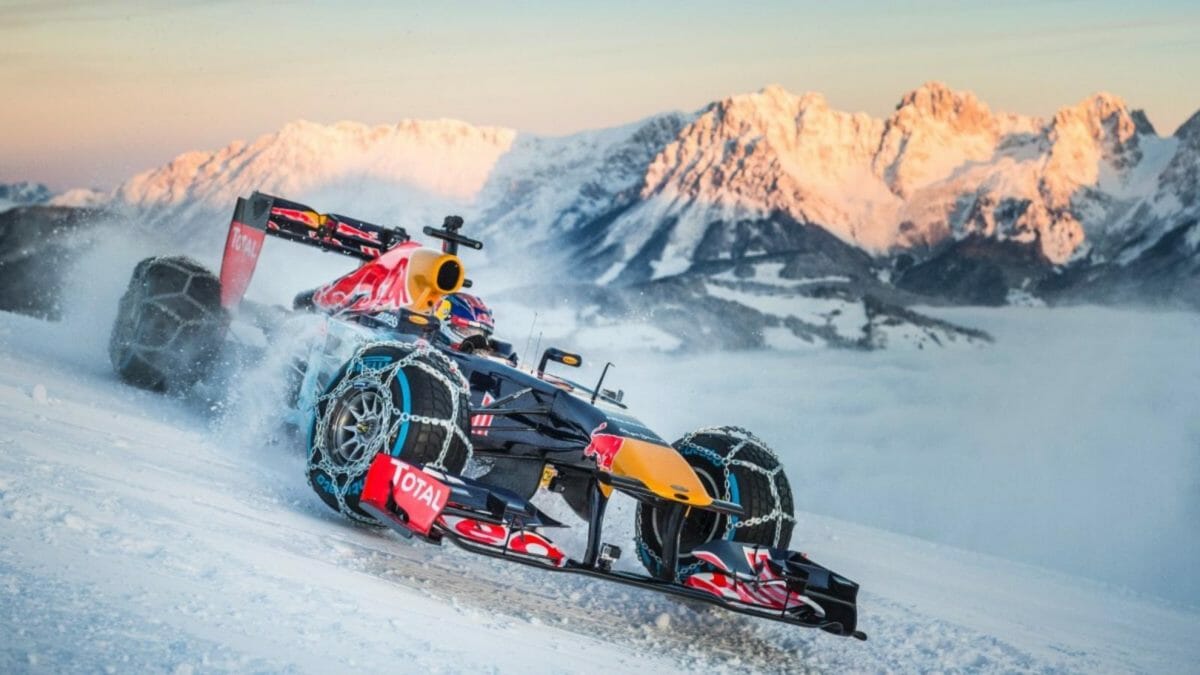 Red bull probably just pulled off a list of all the places an F1 car shouldn’t be driven, noticed a ski slope and went for it. In freezing temperatures, and dangerous terrain and the risks posed a mighty challenge to the driver, but then an 18-year old teenager, Max Verstappen showcased just why he rated so highly. Up against a two-time Skiing world cup champion, Aksel Lund Svindal, Max drove like a monk with chains wrapped around wet Pirelli rubber that day to treat thousands of people that had gathered there to witness an absolute delight.

1) F1 VS Rugby, UK, 2016 – Daniel Ricciardo and his V8 powered Red bull were up against a full-fledged Rugby team in a whole new episode of Man VS Machine, and none of them backed down an inch, flaring up the temperatures of the car and players themselves, to insane levels.

David Coulthard battled the intense heat and his sand sucking car to provide a masterclass in F1 terrain driving on the banks of the dead sea.

David Coulthard manned his Red bull at speeds in excess of 300 km/hr through a 2-lane closed Lincoln tunnel where things can go wrong in a matter of less than a second. DC showcases what a master at work he truly is.

All these stunts were performed in a closed and safe environment in the presence of medical teams.