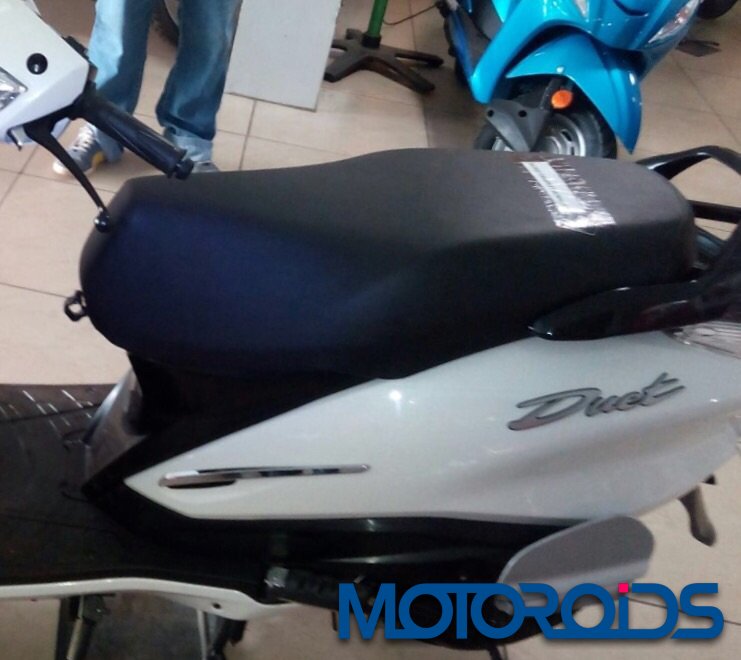 Just a few minutes back we brought you images of the new Hero Maestro 110 Edge scooter spied at a dealership, and here comes another- the new Hero Duet 110cc scooter. Seems like Hero Motocorp wants to square up its arsenal against the big H’s popular selling model. While the new Maestro Edge was already slated for a slugfest against the Activa 3G- albeit targeting the male oriented segment, the new Hero Duet 110cc as the name suggests is aimed as a unisex autoscoot targeting both genders. Though there is still some time for the official launch on the new Hero Duet, one of our readers has spy shot one at a Hero Motocorp dealership.

To start with expect the new Hero Duet to feature an all metal body and sharing most of the hardware and underpinnings with the new Hero Maestro Edge 110cc. Expect the new Hero Duet to be powered by the new 110cc air cooled engine that would be doing duty on the new Maestro Edge with power and torque figures reading 8 bhp and 8.5 nm respectively. Similar to the Maestro Edge, the new Hero Duet also features front telescopic suspension with combined braking system. The new Duet has been embellished with a dash of chrome on the rear panels including the 3D emblem. The twin hold grab rail design has been carried over from the previous gen Hero Maestro. An inner box seems to be offered as standard against the Activa which is provided as an option at extra cost. The new Hero Duet would also sport features such as external fuel filling with remote opening, tubeless tyres, a digi-analogue console, a USB mobile charging unit and boot light offering a great value proposition for the buyers.

We expect a launch soon with bookings shortly thereafter. The Honda Activa 3G has a two way battle lined ahead- it’s just a matter of time and consumer preference that would decide victory for the three toddlers.