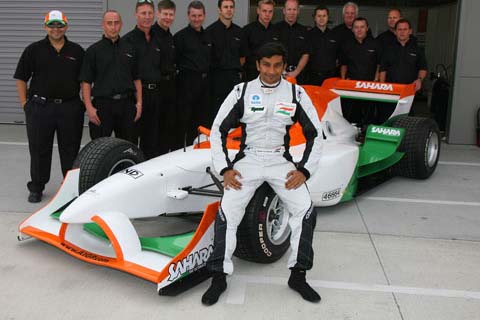 Lat year was a forgettable one for Narain Kathikeyan. An unlucky slip at the Le Mans didn’t do him good and he ended the year by testing for a NASCAR team. This year is revving up for him on a good note. At least he is in the news for some reason or other.

Narain Karthikeyan has been conferred the Padma Shri by the Government of India. The Padma Shri is one of the highest awards given the government to civilians. The only Indian till date to have raced in Fornula One has been bestowed with the honour for his contribution and achievements in the world of motorsports.

When questioned by the media about his reaction to receiving the Padma Shri, Narain said that he felt deeply honored and humbled by the government of India in receiving this award and it is a great day not only in his life but also in the life of Indian motorsport. He thanked his family for their unrelenting support, his sponsors namely Tata group, B.P.C.L, Amaron and J.KTyres, adding that their support have played a crucial role in his success as a racing driver. The down to earth racer that he is, Narain did not forget to thank his fans who have cheered him on through all his success and dedicated this award to them.