Home Audi The all-new Audi Q5 bows down at the 2016 Paris Motor Show; will come to India eventually 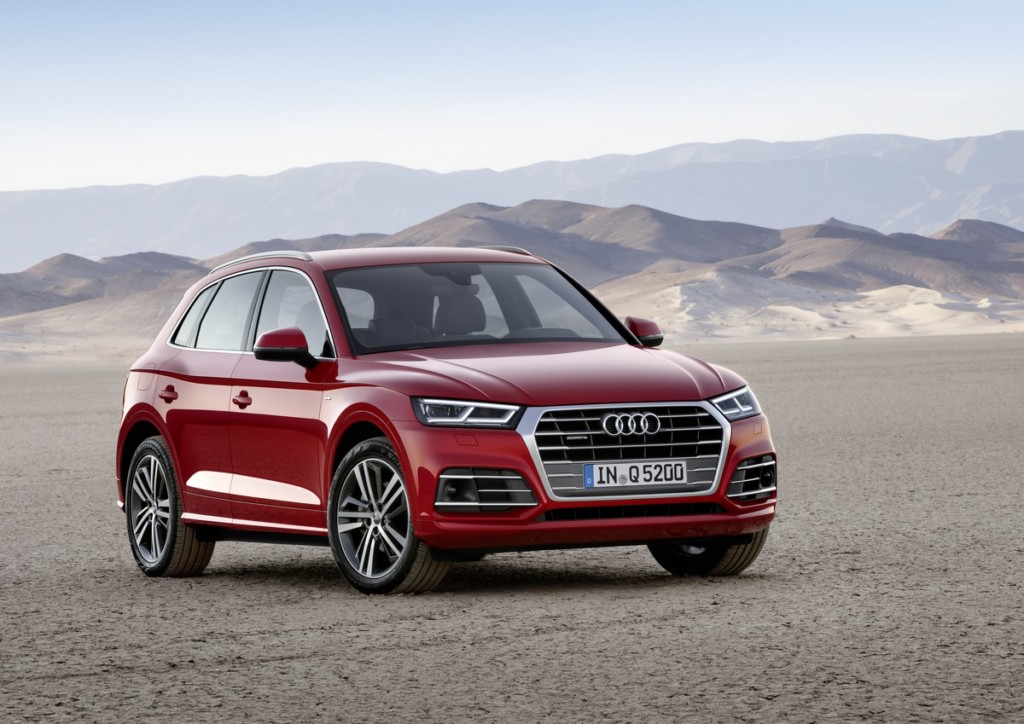 Replacing the world’s best-selling SUV in its class might sound like a Herculean task for most manufactures, but for Audi, it’s just another day at work. “The first Audi Q5 was for many years the world’s best-selling SUV in its class. It was no easy task to design its successor, but that is precisely why it is so very exciting,” says Rupert Stadler, Chairman of the Board of Management at AUDI AG. “With the new Q5 we are setting the bar a notch higher. Among the great innovations are the quattro drive system with ultra technology, highly efficient engines, the air suspension with damper control and a comprehensive line-up of infotainment and assistan’ce systems.” 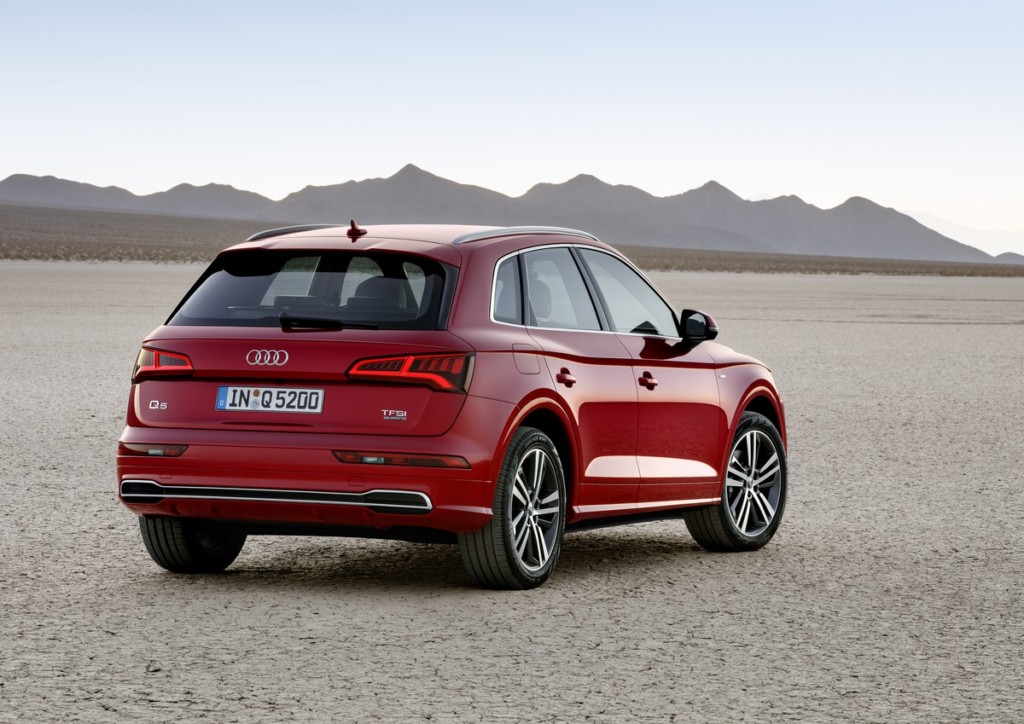 It might look glaringly similar to its predecessor, but every single body panel is new. The design is typical Audi crossover fare, which gets you that thick framed “Singleframe” grille, LED jeweled headlamps with the fancy Matrix tech, and the slightest hint of curvy blemishes on the taut bodywork. Although these are elements dictated by the big brother Q7, the new Q5 looks..like a Q5. It’s instantly recognizable as one, because of the familiar silhouette and stance. However, at 4.66 metres long, 1.89 metres wide and 1.66 metres tall with a 2.82-metre wheelbase – compared to the previous model, the new Q5 has grown in nearly all of its dimensions. 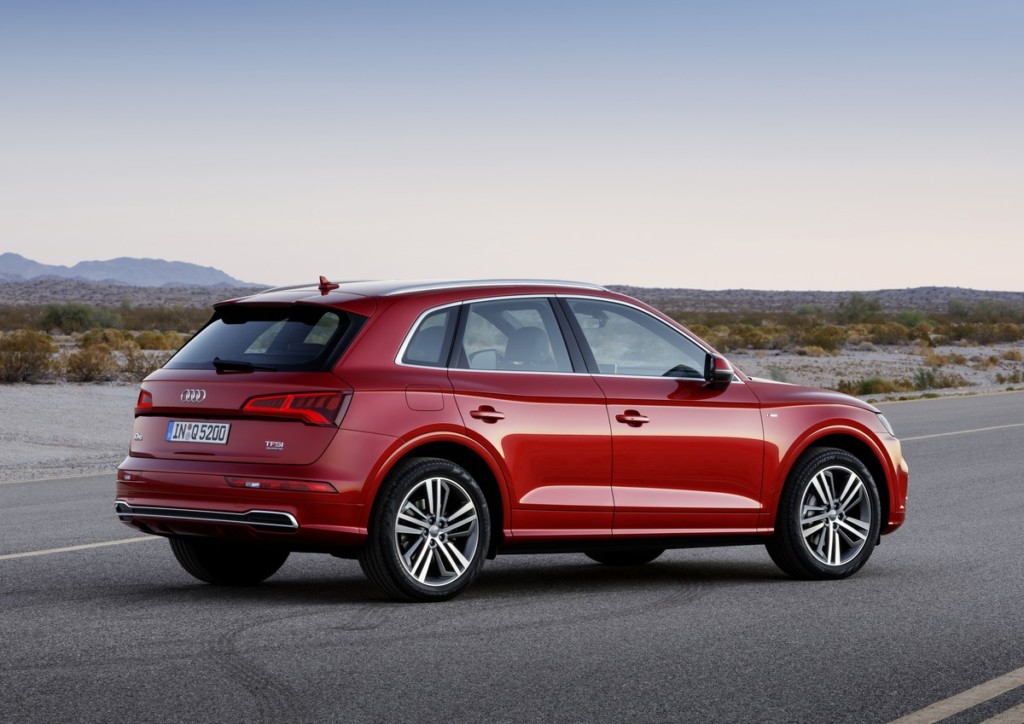 But then its based on the incredibly versatile and lightweight MLB Evo II platform, which means that unladen weight has been reduced – depending on the engine – by up to 90 kg. Audi says that steels with maximum tensile strength and aluminium formed the material mix in the new Q5’s body. Aerodynamics are claimed to be class leading with the four-cylinder versions attaining a cd figure of 0.30 with the “aerodynamically optimised” roof. Consequently, the new Q5’s interiors are claimed to have the best interior acoustics in its class, due to “exceptionally low” wind noises. The new Audi SUV comes from the factory with 18-inch alloy wheels. The Sport equipment line comes with 18-inch wheels, and the S line package with 19-inch wheels. Wheels up to 21 inches in diameter are available as options. 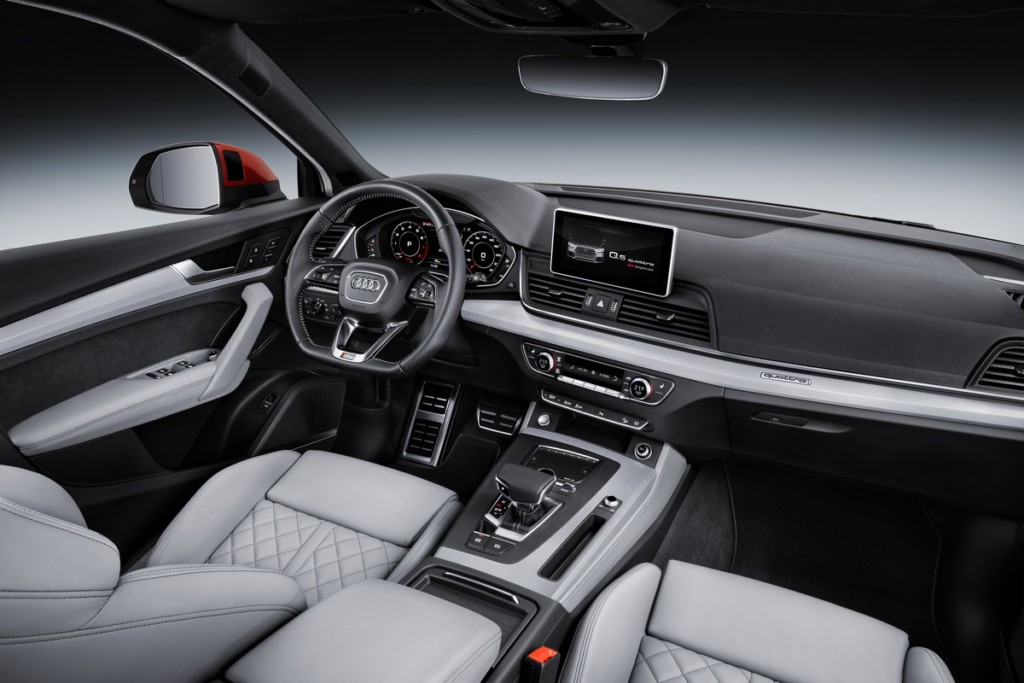 The interiors are typical Audi crossover fare too, with horizontal, somewhat stoic lines bordering the usual selection of colours and materials put together with quality workmanship.  A three-spoke multi-function steering wheel comes as standard, while the optional ambient lighting with 30 different colours won’t leave you gloomy in the darkest of nights. The interiors are practical too, with seating for five, and features like a rear seat that can split into three segments, optional seat back angle adjustment, along with 610 litres of boot space; 10 litres more than in the previous model and 1,550 litres when the rear bench is folded down. Like the Q7, a power-operated tailgate fitted as standard, and the new Q5 with also squat its rear end via the optional air suspension for ease of access to the boot. 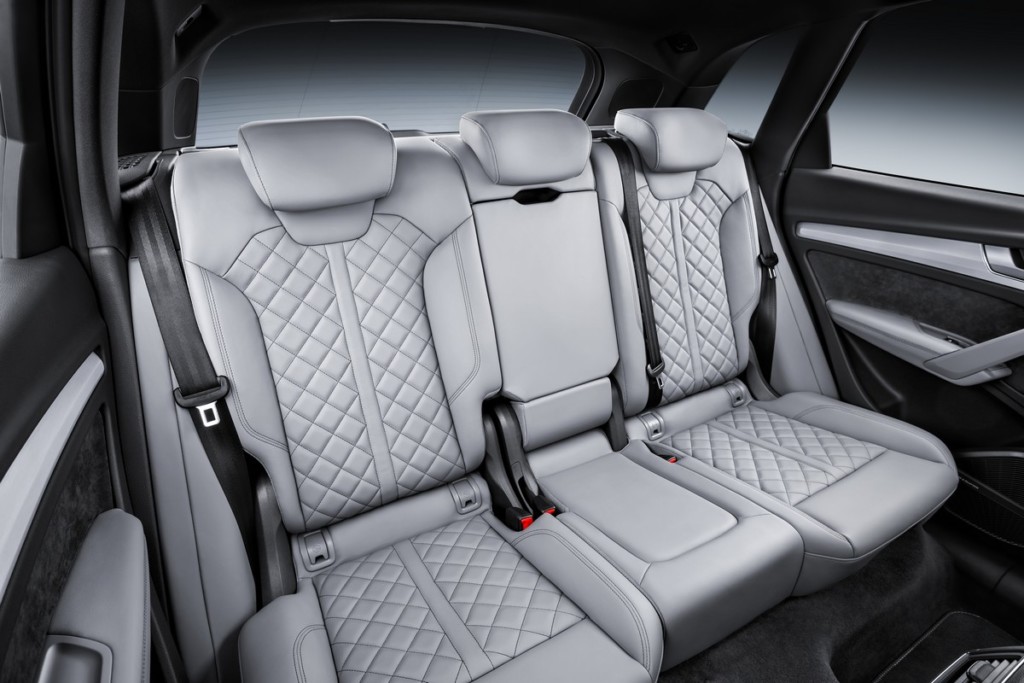 As for the tech, the usual suspects are the optional Audi virtual cockpit shining its high-resolution 12.3-inch screen in the driver’s face, and an 8.3-inch central display which is the window to the Audi MMI that can be accessed via the touchpad with haptic feedback integrated into the rotary push button on the center console. A head-up display is optional, while the MMI features navigation with a self-learning “personal route assist” function. It can also create a Wi-Fi hotspot by hooking on to Audi connect, thus letting passengers go online with up to eight mobile devices. Other optional equipment include the Audi phone box which connects smartphones to the vehicle’s antenna for optimal reception quality while charging them inductively, a Bang & Olufsen Sound System with 3D surround sound, and the new Audi tablet, which serves as a flexible “Rear Seat Entertainment” device. The Audi smartphone interface also brings Apple CarPlay and Android Auto into the new Q5. 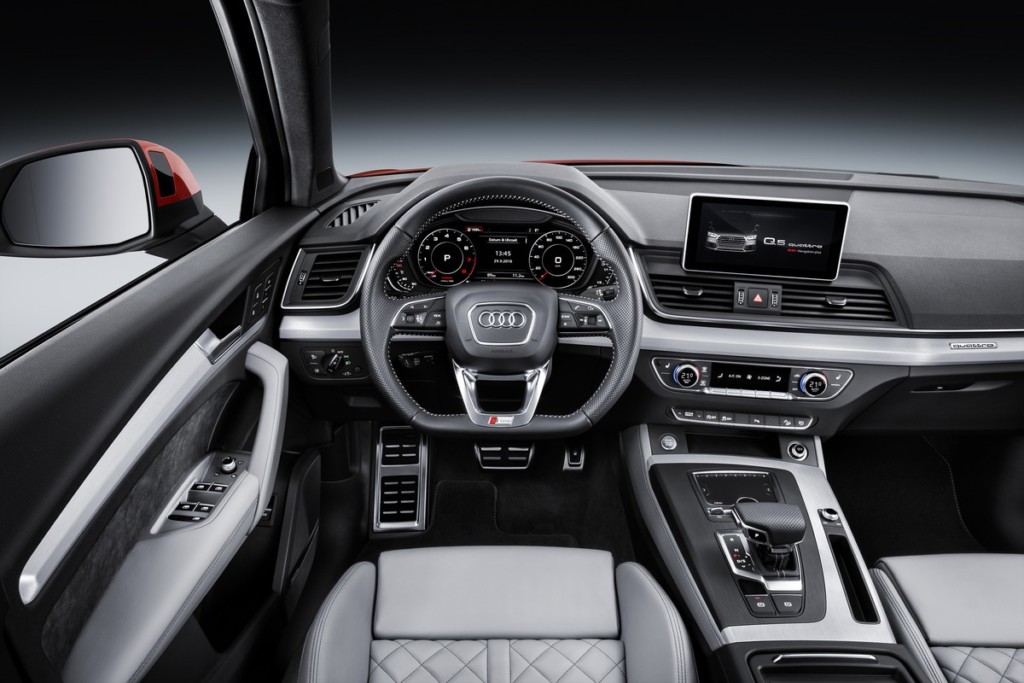 Driver assistance systems on board the new Audi Q5 are bundled into three driver assistance packages – Tour, Parking and Parking Advanced. To pick a few, there’s  adaptive cruise control (ACC) including traffic jam assist that can handle some of the steering work in slow-moving traffic, Audi active lane assist, cross traffic assist rear, the exit warning system, collision avoidance assist and turn assist. The Audi pre sense city is a standard feature which warns of pedestrians and vehicles and may initiate automatic emergency braking within system limits. Park assist, the camera-based recognition of traffic signs and hill descent assist round out the features. 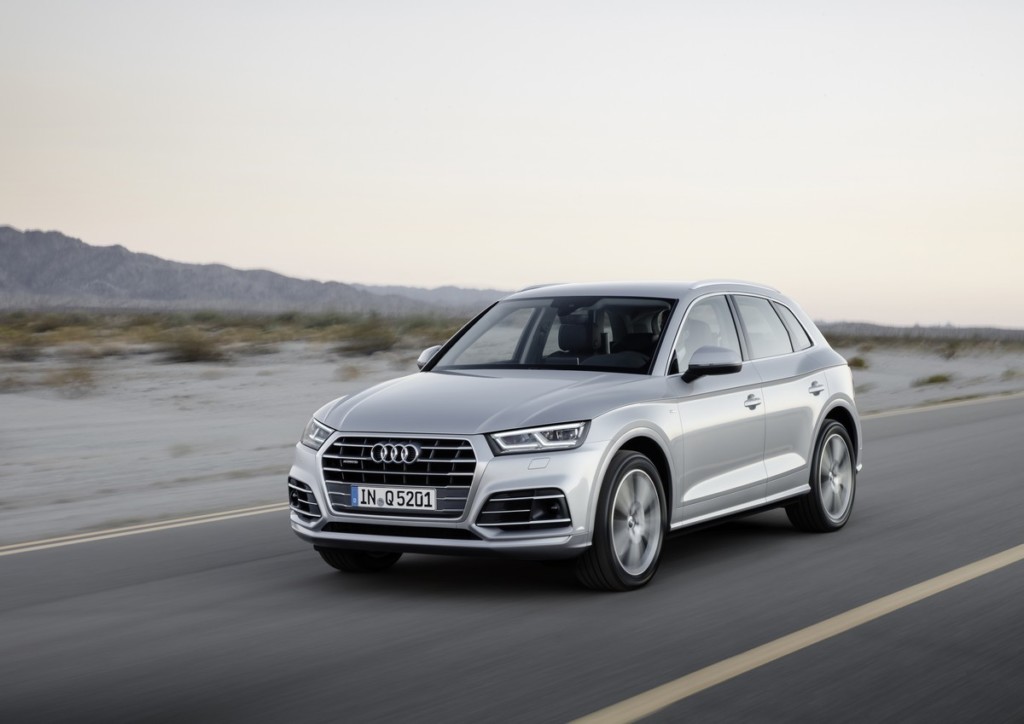 The new Audi Q5 is launching in the UK with a 2.0 TDI engine producing 190PS. Fuel consumption for this model has been claimed to be significantly reduced. Soon after the launch a 2.0 TFSI engine will also be available. The further developed 2.0 TFSI has an output of 252PS, while the intensively revised 3.0 TDI, coming at a later date, increases output to 286PS with 620Nm of torque. Expect both the TDIs to be employed in the India-spec model when its launched in the country eventually. 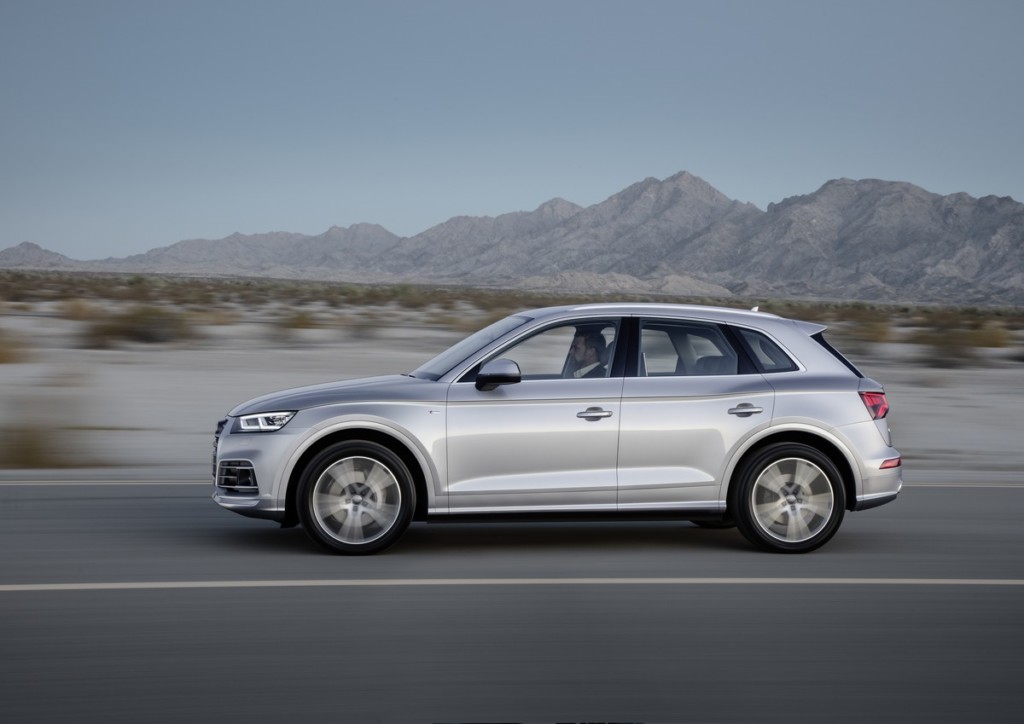 Audi says that the drivetrain of the mid-size luxury SUV has been redeveloped from the ground up – this also applies to the six-speed manual transmission and seven-speed S tronic. The automatic transmissions integrate a fuel-saving freewheel function. The driver controls it by a selection lever or by shift paddles on the steering wheel; in both cases, the control signals are transmitted electronically. The new quattro drivetrain with ultra technology is standard equipment for the 2.0 TDI with 190PS, and for the 2.0 TFSI with 252PS. The quattro with ultra technology always disengages the rear-axle drive whenever it is not needed, and if necessary it can proactively re-engage it. For the V6 diesel, Audi can deliver an optional sport differential at the rear axle which distributes torque between the wheels as necessary. 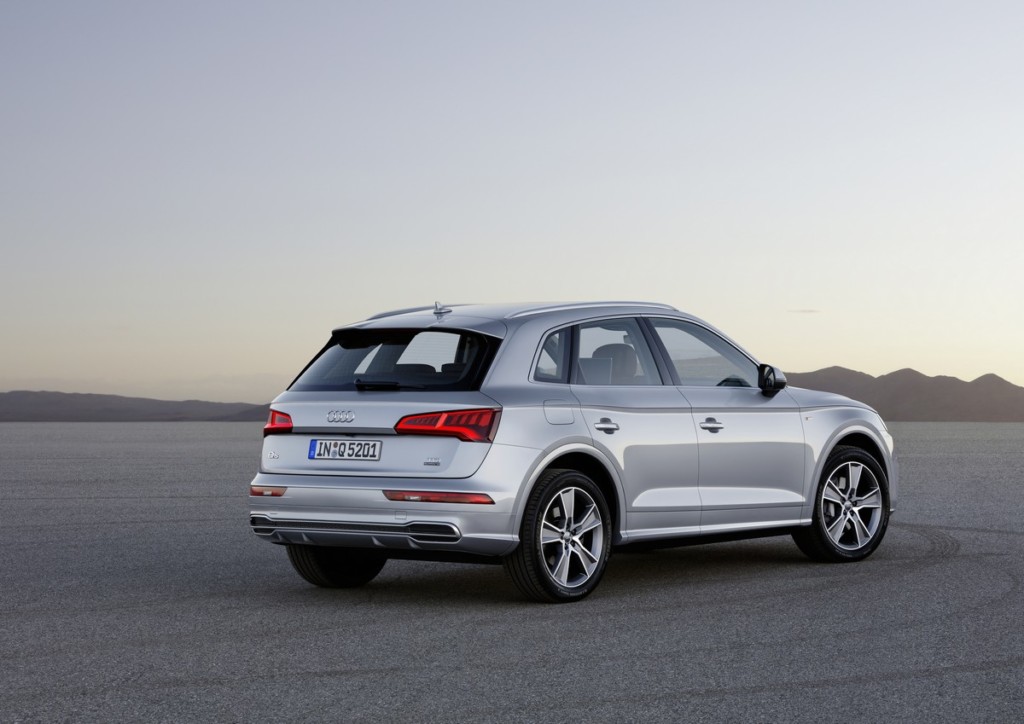 The new Audi Q5 rides on newly developed five-link suspensions while using a new electromechanical power steering system. One of the seven driving modes available can be selected via the Audi drive select, with two new modes, lift/offroad and allroad being introduced. Meanwhile, the new adaptive air suspension can be used to vary the ride height of the car body over five stages.

The new Audi Q5 is manufactured at a newly constructed plant in Mexico. It will arrive at Audi Centres in the UK in the spring of 2017.