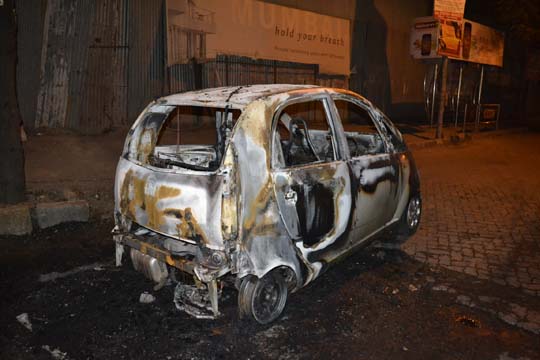 Tata Nano ceases not to make news. The ‘little wonder’ from Tata Motors has been attracting eyeballs ever since it was introduced to the public at the 2008 Delhi Auto Expo. Unfortunately, the car could never transform all the hype into car sales and has failed to become the king of entry level car market.

Much of this can be attributed to the fire incidents that took place in the beginning of the car’s career. Now, right when the Indian car buying lot was close to forgetting about the fire incidents, we have received the news of yet another Tata Nano going up in flames.

The latest Nano fire incident took place in Mumbai on November 10th and is said to be this year’s first such case. The cause of fire isn’t yet known and there are good chances that this case has more to do with an external factor than a flaw in car’s mechanicals.

It may be noted that Tata Motors has always maintained that there isn’t any design flaw in the mechanicals of the Nano and the fire cases that have happened in the past are due to factors such as ‘unauthorized’ fitment of electrical accessories. Furthermore, the 2012 Tata Nano comes with an updated alternator that is said to be less prone to catching fire than the older unit. The car maker has also replaced the alternator of all the first generation Tata Nano cars with the new one.

While we refrain from passing a verdict until the exact cause of recent fire incident becomes clearer, we do feel that the manufacturer has put in some really sincere efforts to make its ambitious compact car a safe and well sorted out offering.

We are also eagerly waiting for the launch of Tata Nano Diesel which looks all poised to offer ultra low running costs and take the entry level car segment by storm.