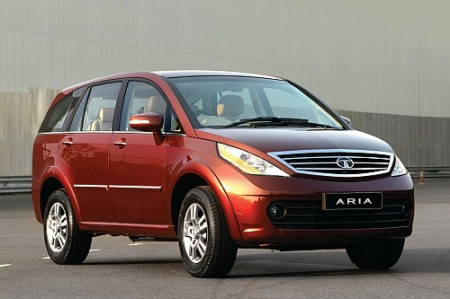 Tata Motors showcased their latest creation, the crossover Aria at the Auto Expo earlier this year. Though the one at Auto Expo this year was the production ready version, Tata has showcased this vehicle of their’s earlier too at Geneva Motor Show in 2005. Latest news is, according to Indian Autos Blog, Tata has confirmed that the car will be launched soon, anytime between July and September this year.

Aria will be feature-laden so dont be surprised to see climate control, airbags and ESP in the production model. The car will be exported to European markets too, so expect similar features in the Indian model too. It will be powered by the 2.2L Dicor engine same as the current gen Safari and Sumo Grand. But as this car will be placed a segment higher than these cars, the engine will be in a different state of tune. If you remember we had earlier spotted the Aria being tested around Pune. The test mule was silent so expect a similar low noise engine in the production car too which will power all of its four wheels as it will sport an AWD system. This system will sense the car’s grip and accordingly send torque to its wheels.

Expect to shell out 12 to 15 lakhs of your hard earned money to get yourself one of these.

The car is the perfect example of the versatility Ratan Tata’s company has. The quantum leap in terms of quality and standards will be easy felt once you experience the car. From the way it is built to the build quality, everything will speak for the amount of labour put by Tata to make this car a wonderful product. As you can see, the expectations are quite high and we hope that Aria wont disappoint.

Thanks IndianAutosBlog for the news and the pic