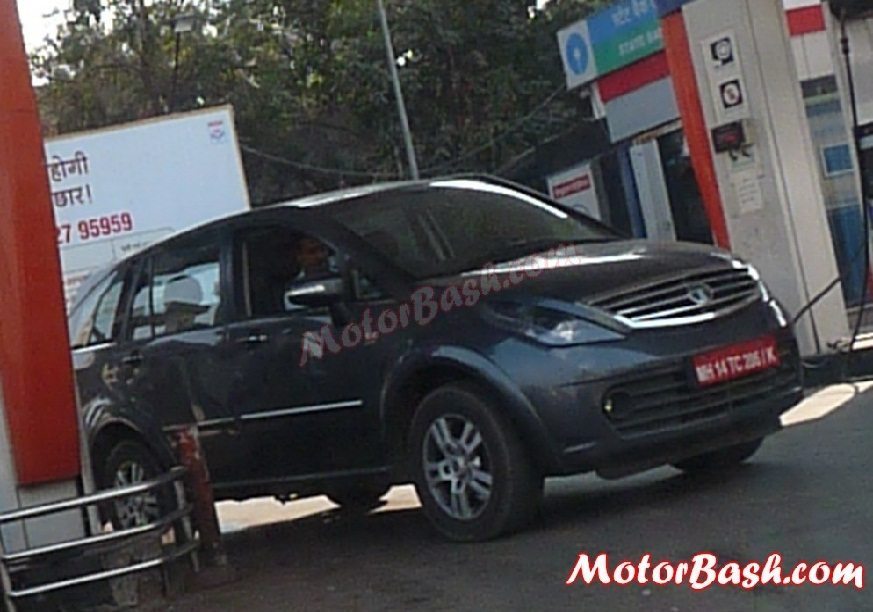 We have always felt that the Tata Aria is a well sorted out car that deserves a better fate in our fast maturing car market. However, thanks to poor marketing and a brand image that people find it tough associating with a premium car, the Aria could never manage to sell in good numbers and is sadly considered to be a dud.

We recently saw Tata launching the Aria Pure LX variant at a more affordable price of INR 9.95 lakhs. However, in spite of all the price cuts and discounts, the Aria failed to capture the imagination of the car buying lot.

Now, it has emerged that Tata has still not given up on the Aria MPV and will soon come up with a facelift to give the car a new lease of life. The Tata Aria could get mildly refreshed cosmetics and revised price list as soon as by the middle of this year.

Seen here is what is basically the first ever pic of the Tata Aria facelift. The Tata Aria facelift sports smoked headlamps (a la Vento facelift) that consist of a projector setup.  The car might also come with a rosewood-beige interior that we saw at the Aria-AT concept at the New Delhi Auto Expo last year. Other changes might include the addition of a Harman audio system, silver and gold door handles and captain chairs for the flagship variant.

Tata might also launch a new variant with a 6-speed Auto ‘box with Tiptronic gear selection.

It will be interesting to see if the Tata Aria facelift will be able to enjoy a better fate in our highly competitive car market.