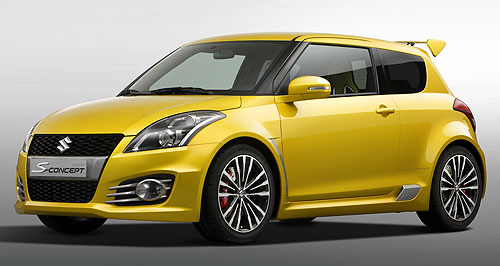 Remember the Suzuki Swift S-Concept shown at the Geneva Motor Show in March 2011? Seems like Suzuki is planning to put the hot hatch in production as early as November 2011 in Japan!

The concept of a Sport variant of the Swift is nothing new though. Even the current gen Swift (soon to be replaced in India) was available in the Sport guise in Japanese and most of the European markets. The car was equipped with a 1.6-liter naturally aspirated high-revving 1.6-litre DOHC engine with 125 bhp and 148 Nm. The erstwhile Swift Sport featured sportier bumpers and spoilers, stiffer suspension, twin exhaust pipes, red sport seats and four-wheel disc brakes on 16-inch wheels.

Now it seems that the new-generation Swift too will have a Sport variant. The S-Concept, shown at Geneva will form the basis of the new Sport avatar. The car will lock horns with the VW Polo GTI and Ford Fiesta ST in the European market.

In its sportier, Sport, the Swift is expected to deliver 136 horses with its 1.6-liter engine. Transmission duties will be taken care of by a six speed manual, or for the first time in the history of the Swift, an automatic, with steering mounted pedal shifters.

The news was released by Suzuki’s Russian subsidiary.  “In Europe the Volkswagen Polo GTI and Ford Fiesta ST will be rivals for the Swift Sport, which at present is undergoing testing at the Nurburgring,” said Suzuki Europe spokesman Peter Bondarchuk in a press release.

The Swift Sport will be the first three door version of 2011 Swift. The car will have an aggressive stance with a wide body and plenty of cosmetic upgrades to announce its arrival. The Swift Sport will boast better aerodynamics, an aggressive front bumper, a rear wing and diffuser and side skirts with air scoops. The alloy wheels would be lighter and wider for a bigger footprint. The tyres will be low profile, and braking duties will be taken care of by Brembo.

The Swift Sport would also be wider by about 60mm than the regular Swift, and will feature. The production version, just like the S-Concept may feature bi-Xenon headlights, sports bucket seats, and a sporty leather clad steering wheel.

Quite a hoot, those specs! Aint it? How much should such a product be priced in India, if at all MSIL considers it for this country?