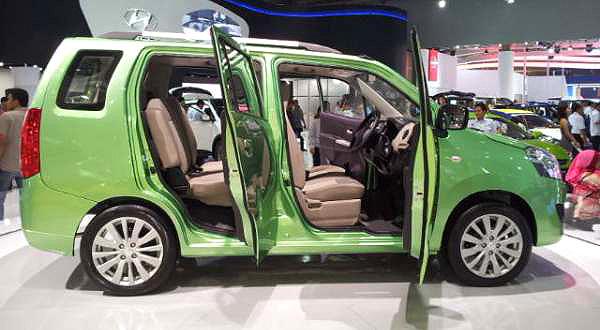 In a move that can be best described as surprising (but not even slightly illogical), Japanese car maker Suzuki recently unveiled the new Suzuki Wagon R 3 Rows Concept, which was showcased at the 2013 IIMS. The Suzuki Wagon R 3 Rows concept is basically the MPV variant of the popular hatchback and can seat up to seven!

A look at the pics of the new concept and those of the hatchback variant reveals that the car continues to have the same wheelbase and the additional space is courtest a slightly longer rear end.

Talking about the new car, Tuilan, Marketing Director of PT Suzuki Indomobil Sales, said,“It’s still a concept and no decision has been made”. However, it has been confirmed that if this Wagon R goes into production, it would be a contender for the Indonesian LCGC (Low Cost Green Car) project, thereby availing some tax benefits.”

Powering the car would be the same 3 cylinder, 67PS, 1.0 litre petrol engine that powers the hatchback sibling.

As is obvious, the production-spec Wagon R Three Rows will be positioned between the Wagon R and the Ertiga. We expect the car to be priced at par with the Ritz hatchback and we won’t be at all surprised to see it rivalling the recently unveiled Datsun Go+, the MPV variant of the Go hatchback.

It may be noted that the while the Wagon R based MPV has been unveiled in Indonesia, which is known for being a popular market for sellers of MPV, we won’t be too surprised to see this car coming to our shores.

What say? Do you want the Suzuki Wagon R 3 Rows MPV to come to us? Do let us know by commenting below.