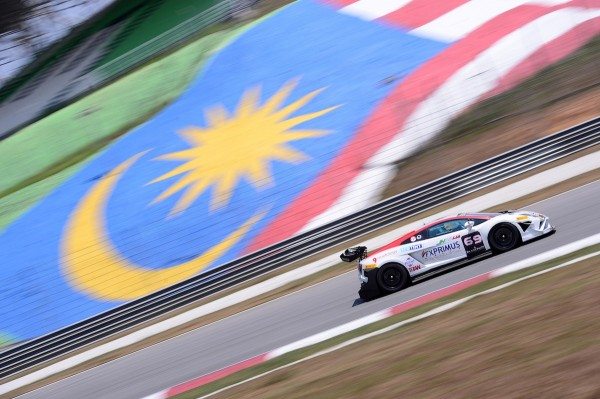 Lamborghini surged across the outskirts of Kuala Lumpur’s sun-bound Sepang on June 28-30, as new and exciting dynamics, new upgrades and a new diversity of gentlemen drivers took on the Sepang International Circuit.

Last year a new milestone in Lamborghini history was created at the Sepang International circuit, as it was this prestigious track chosen to launch the inaugural Super Trofeo Series in the Asian continent. After a spectacular start to this year’s season at the Shanghai International Circuit, this second round of the Super Trofeo Asia Series 2013, presented by  the Italian manufacturer of luxury sports cars Automobili Lamborghini and luxury Swiss watchmaker Blancpain, gave spectators an exhilarating performance.

This racing weekend brings Super Trofeo to a whole new level of diversity, welcoming two new Malaysian teams, the celebrated actor and singer Ryu Si-won from Korea, and for the first time ever two female competitors, Rally Marina Sa from Indonesia and Mika Kagoshima from Japan. Gentlemen drivers from Indonesia, who joined the race in four different cars, brought further thrills to the series.

Under tropical conditions and a track proceeded by name, gentlemen drivers entered the nerve-racking heat and blistering track features of the world renowned Sepang International Circuit. Following Friday’s 30 minute practice session, two 15 minute qualifying rounds to determine the rankings for this round preceded race 1, an endeavor for the best lap-time that aroused the racing vigor of every team competing.

In Race 1 on Saturday, Group A saw an epic performance from Kazushi Kitaura and Hideto Yasuoka (#10) from Japan, whom having climbed the positioning board with a mind for persistence and an eye on the podium, won them a well deserved first place. Home representing team Zen Low/Dilantha Malagamuwa (#69) of Malaysia and Sri Lanka triggered emotional excitement as they demonstrated extraordinary determination to finish in second place. After leading the starting grid following a tremendous best lap time in the qualifying rounds, victors from Shanghai Wiser/Xin (#9) finished third in this exciting first race.

In group B, drivers drifted in and out of pole position in a fierce contest for final victory that saw Andrea Garbagnati (#6) seize the overall victory. Taking to the podium for the very first time in this year’s championship were China’s Zheng Ting and Steven Lin (#66), whose second place victory was followed by Jeff Lu (#38) of Taiwan in third, who also made his glorious debut onto the podium.

Race 2 on Sunday saw an inspiring race performance from Group A fill the circuit with a gleaming sensation of pride as the champion emerged as Malaysia’s very own Afiq Yazid (#2), whose leading position throughout the majority of the race set uncompromising standards for the other drivers following eagerly behind. Marking their fourth consecutive podium finish in this year’s championship, highly successful team Wiser/Xin (#9) of China made an impressive return to the front to win second place. From Japan, Yakinori Taniguchi (#12) displayed remarkable determination and driving skills that won him third place and indeed his debut victory in the Super Trofeo Asia Series.

In Group B, quenching his continued thirst for success was Andrea Garbagnati, a victory hotly contested for by Xu Peng Kai and Zhang Zhen Dong (#7) from China, whose impressive skills throughout this tournament were justly rewarded with second place. After an impressive pursuit leading group B for quite some time, Han Lin and Hanss Lin of Taiwan (#36) demonstrated remarkable skills as they came in for a well earned 3rd place.

“The Lamborghini Blancpain Super Trofeo Asia is a unique occasion to reinforce our presence in this region and to show our connoisseurs another universe of the brand” commented Marc A. Hayek, Presiden & CEO of Blancpain. “This championship unites Haute Horlogerie and super car aficionados in a unique experience. Malaysia not only shares our passion for exceptional driving performances, but also a growing appreciation for luxury mechanical watchmaking, twin sources of enthusiasm that bring us closer to this valued market.” Cristiano Inverni, Coordinator of Lamborghini Blancpain Super Trofeo Asia Series, added “It was fantastic to watch this second round in Malaysia and to revisit this remarkable circuit. The exclusive lifestyle demonstrated with Super Trofeo is an unmistakable gene of Lamborghini motorsport that puts the competing gentlemen drivers at the forefront of extraordinary racing.”

Along this complex track inexperienced by many, with five and a half kilometers of generously broad tarmac surfacing and 15 unforgettable turns, the anxiety of contestants was lifted with the 2013 Gallardo LP 570-4 Super Trofeo. In addition to its high safety components, firm traction and extraordinary handling abilities, this model enjoys a new aerodynamic kit, which after being severely put to the test, raises the stakes of this year’s series to a whole new level.

The VIP lounge was furnished today with the opulence of all things Lamborghini, as drivers, their families and friends indulged in the luxury Italian cuisine and overall ambience that shaped this ultimate lifestyle experience. Here, guests also enjoyed the exclusive company of Gallardo LP 560-4, whose provocative design and sophisticated workmanship illuminated the luxury dynamics of this model that lay adjacent to its racing derivative outside on the track. From Blancpain, a magnificent array of luxury timepieces was exhibited to provide an exclusive aura that filled the lounge with a further glow of uncompromising beauty.

On August 09-11, the Lamborghini Super Trofeo Asia Series makes its way for the first time to Inje, Korea, where in the remote surroundings of the recently established and highly renowned Autopia Circuit will host the next race of this ultimate lifestyle experience. This will be the third event in the 2013 Super Trofeo Asia series, and marks not only the increasing development of Asia’s passion for luxury car racing, but succeeds the platform for uncompromising racing and excitement which drivers can now look forward to with immense enthusiasm.