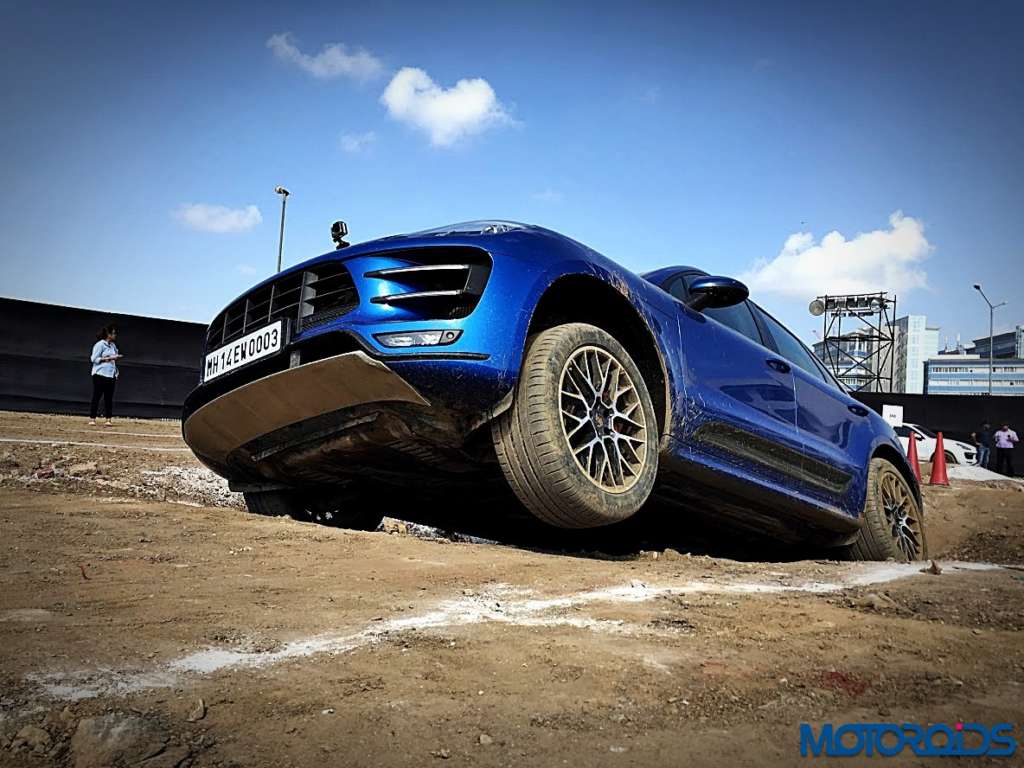 The Cayenne, often considered the best-handling SUV, (a bit of a dichotomy) has been loved by car aficionados across the world ever since it was introduced. To be honest, it has been loathed as well by a few purists who blame it for having corrupted the ‘pure sports car maker’ DNA of Porsche.  These blokes haven’t probably driven the Cayenne though, or they wouldn’t have had their apprehensions.

Adorning a muscular (and heavy) body, the Cayenne, despite the obvious restrictions of the body type manages to defy physics and offer a driving experience which would make many a sport car embarrassed. So while its authority on the road, as a capable corner carver despite all its girth is acknowledged, what often isn’t is its prowess off it. For the Cayenne’s smaller and younger sibling, the Macan, the story isn’t much different either. Truth is, while both machines are adept at kicking some serious ass on the tar, they’re equally skilled at kicking dirt when the roads end. Porsche India created a rather serious off-roading track at the Bandra Kurla Complex MMRDA Grounds to demonstrate just that. We arrived at the scene rather sceptical ourselves, to be honest, but went back totally flabbergasted. Here’s what we saw and experienced. 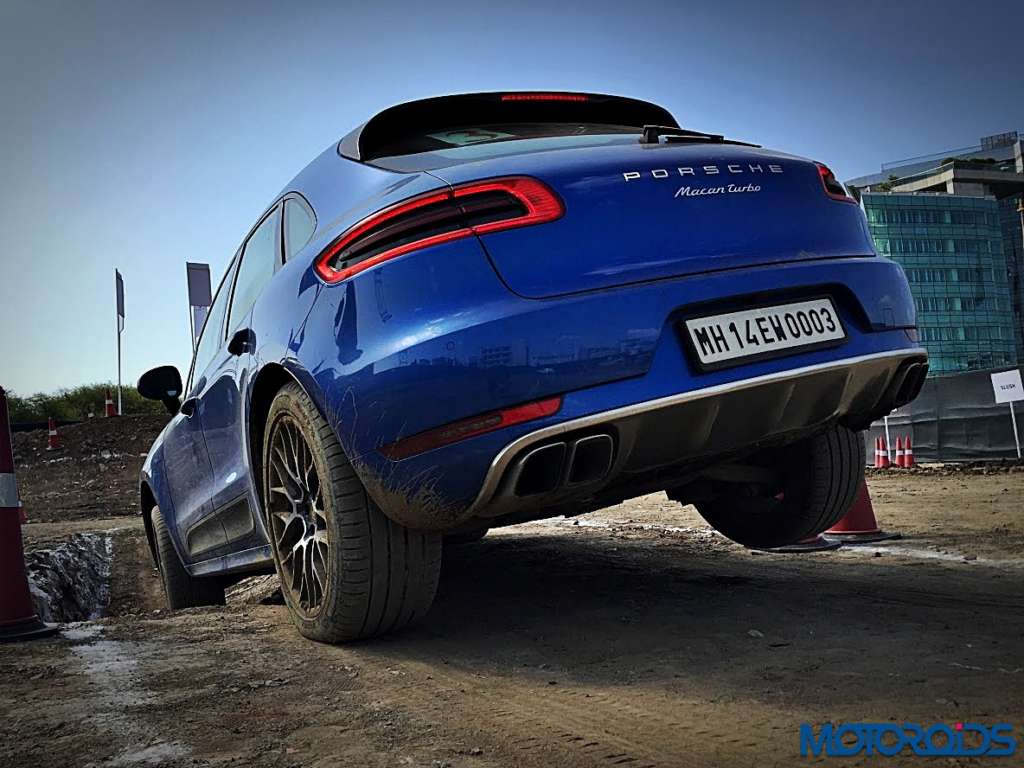 The custom made track, created by OffRoad Junkie represented by Dr. Tejas Kothari was a rather extreme one, meant to take the machines close to their absolute limit. Just to let our readers know, Offroad Junkie is Asia’s only I4WDTA certified off-roading and 4×4 activity related company. The firm engages in off-road track designing, trail drive events, 4×4 training, customization etc and are known to be the best in business, not just in India, but internationally as well.

We started off from Porsche Centre near Prabhadevi, savouring the SUVs through the city streets, traversing the Bandra – Worli Sea Link and witnessing crowds twisting their necks in dismay upon witnessing a horde of Porsche SUVs. I was piloting the Cayenne with a 3.0 litre turbodiesel producing 245 hp of power and 550 Nm of torque. Even with all its firepower, the engine’s noise was barely perceptible inside the super silent, tranquil cabin. We drove in a convoy, gingerly, on a fine afternoon, enjoying the attention and the smoothness engineered into the iconic machine by the much revered boffins from Stuttgart. 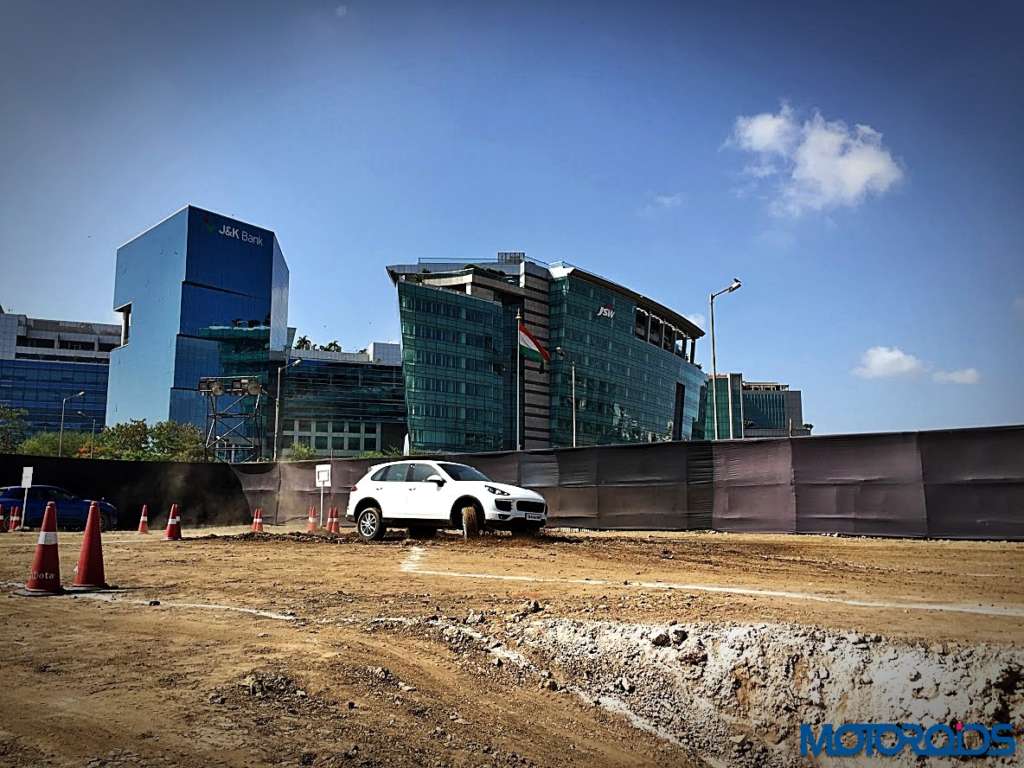 Upon reaching the off-roading venue, I was impressed looking at the track. Having been to quite a few such simulated off-roading experience tracks, I realized that the level of difficulty here was a notch higher, something appreciable knowing that these were exceedingly expensive cars, and any slip up would hand the company a huge bill.

To understand what the Cayenne and Macan are capable of off the road, we’ll first have to have a look at what they’re equipped with. Both machines come loaded with solid off-road gear, though the bigger Cayenne has a bit of an edge here.

The Cayenne features three off-road modes, Off-road Mode 1, 2 and 3. Here’s what each mode does.

Off-road Mode 1: Meant for light off-roading, this mode adapts the maps for all electronic and other systems to offer maximum traction. Choosing this mode also bumps up the ride height through air suspension (PASM) to High Level 1. The air suspension can be further raised to High Level 2 if the obstructions are unusually large or if the required approach and departure angles are higher.

Off-road Mode 3: This mode equips the Cayenne with its most extreme off-road capability. The rear electronic differential gets integrated within the AWD system with the Porsche Torque Vectoring Plus (PTV Plus) technology. The rear diff is fully lockable in this mode, and endows the Cayenne with some serious off-roading power. 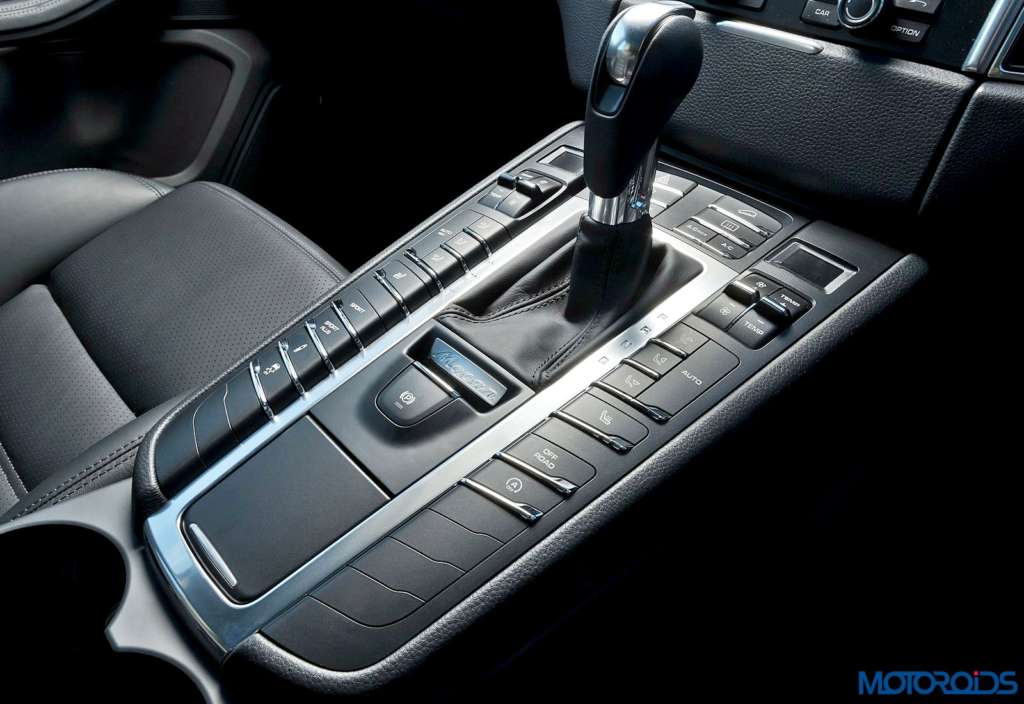 Unlike the Cayenne, the Macan doesn’t come with a multitude of off-roading modes. There’s just one button on the centre console that puts the Macan to Off-Road mode. Once engaged, all the relevant systems are optimized for maximum traction. In addition, the PASM air suspension adjusts itself to tackle the terrain. Porsche Torque Vectoring Plus (PTV Plus) and Porsche Stability Management (PSM) also tune their setup for off-road use. PTM (Porsche Traction Management), which is also fitted as standard, can juggle the drive between the front and rear axles – up to 100 % if necessary.

The off-road course on the MMRDA Grounds comprised a variety of challenges. To start with, the drivers were made to accelerate hard on loose gravel and then brake hard to demonstrate the effective traction offered through a multitude of electronic aids, and the reassuring control offered through ABS and traction control even during hard braking over low traction surfaces. 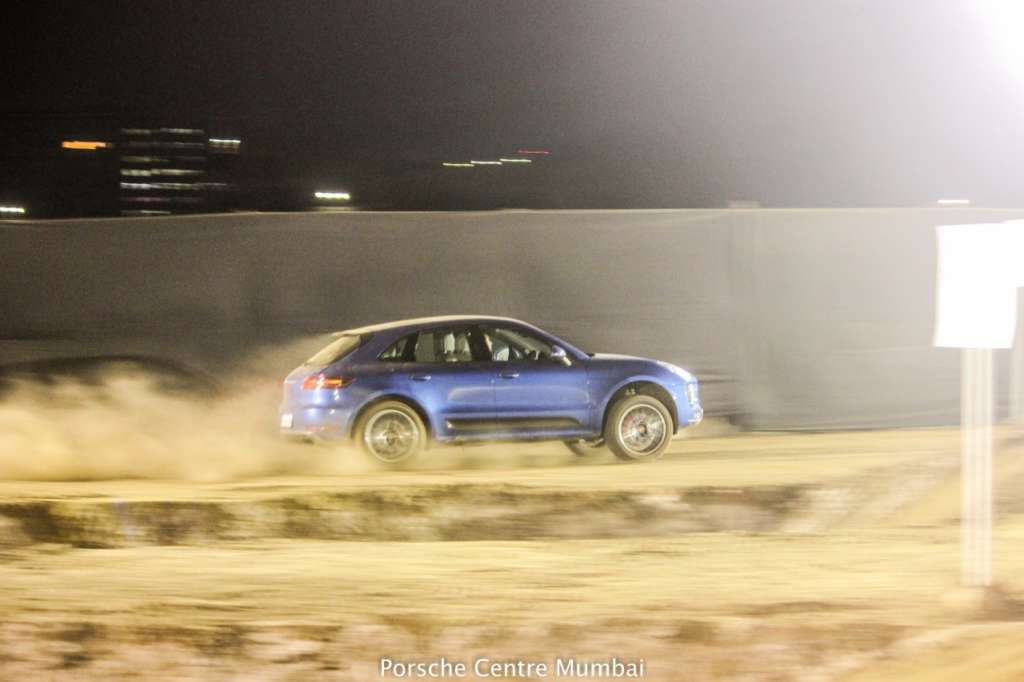 Next up was one of the most daunting mounds we have seen in such exercises. A steep climb on a gravely surface looked intimidating enough to leave the lesser metal spinning their wheels in futility. We put the Cayenne in off-road mode, and feathered the accelerated pedal. The next thing we saw was the greyish sky of Mumbai, with the steep incline sending the nose of the SUV pointing spacewards. The Cayenne crawled up the challenge ahead with no signs of even a single wheel spinning. 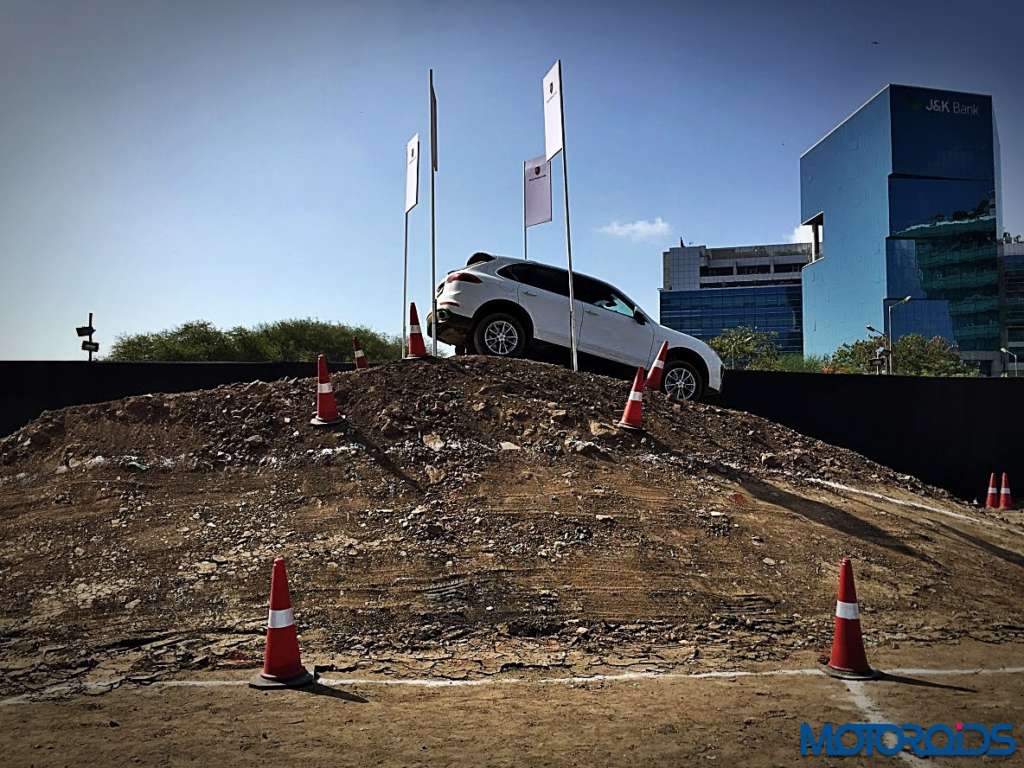 From atop the mound, we were asked to turn the Porsche Hill Control (PHC) on. The system is meant to keep the speed of the car constant on downhill gradients, limiting it between 3 to 30 km/h. You can take your feet off the brakes using this mode, and so we did. The system automatically brakes all four wheels, whilst the Antilock Brake System (ABS) remains active to prevent them from locking. The Cayenne crawled down without a hiccup even as we kept our foot dangling over the brake pedal, just to be sure.

Up next was a banked, low traction banked terrain meant to tilt the SUV at more than 30 degrees and test its grip against gravity. The very affable ladies from the communications team of Porsche occupying the left side seats were suddenly witnessed to be anxious, and justifiably so, with the contraption precariously tilted over and appearing as though it will topple over as it crawled. The Cayenne dismissed the challenge disdainfully though, much to the relief of our fairer colleagues who were hanging on for dear life thus far. 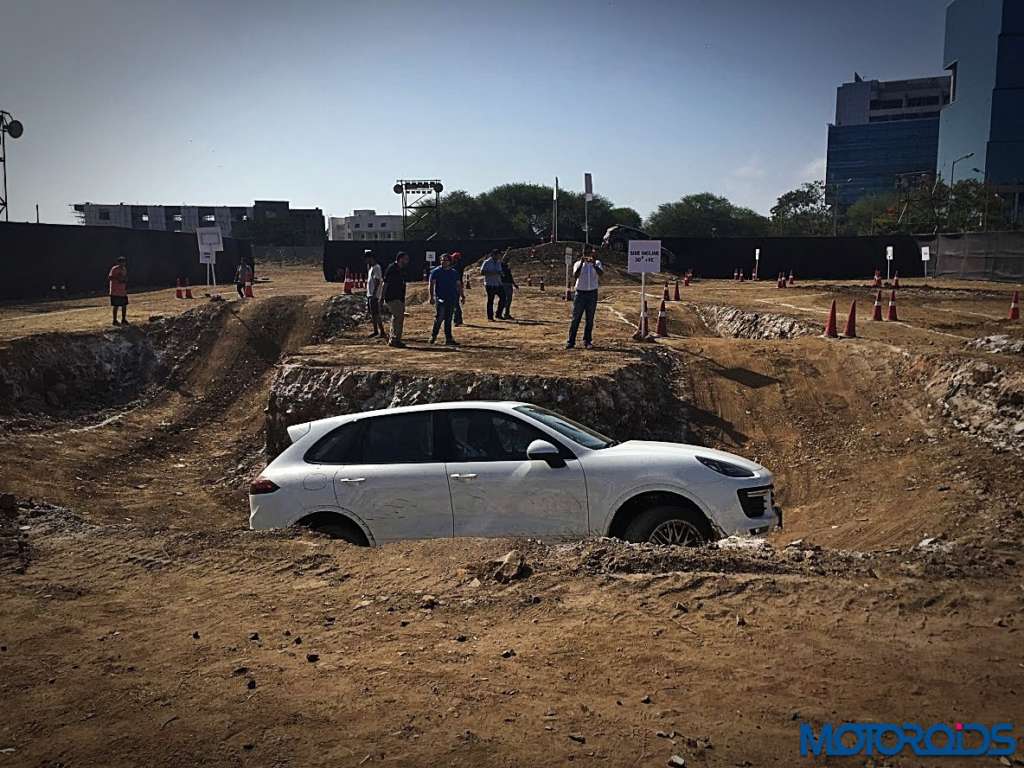 Next up was a deep trench meant to swallow the SUVs whole with a steep departure angle. The deep and wide furrow inside the ground led us to another steep climb with a rather narrow crest. With the front and rear wheels of the cars placed on either side of the summit, the space between the crest and the underbody wasn’t even half an inch – demonstrating the attention to detail that had gone into the creation of the track. Also, had it not been for the SUVs’ ground clearance, they would have turned into a see-saw over the peak. 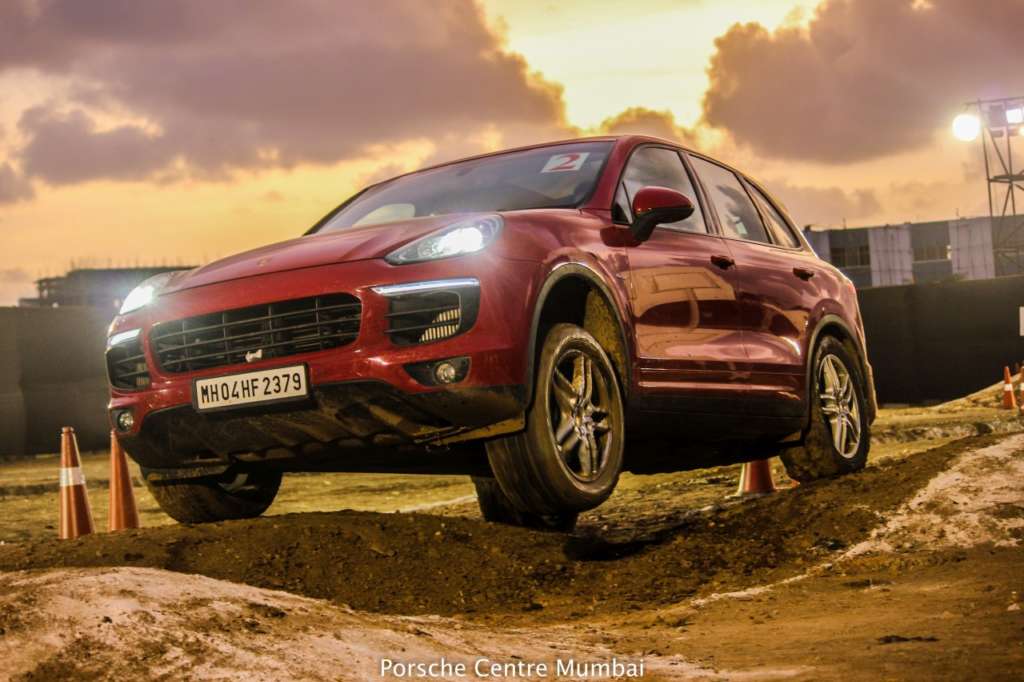 After clearing the hurdle without breaking a sweat, the vehicles were taken to the slush section of the track, with water and slimy mud all geared to wrap the tyres and rid them of any traction. Porsche Torque Vectoring Plus (PTV), along with Porsche Traction Management (PTM) and Porsche Stability Management (PSM) systems, pulled the Cayenne and Macan through without any drama. The Cayenne with its advantage of rear-axle differential lock performed better in these conditions.

The course culminated in a wheel articulation course where the Macan and Cayenne, both having their tyres smeared in slick mud did slither around a wee bit before finding grip again and demolishing the final challenge. As mentioned before, the Cayenne with its better off-road hardware had an advantage here too. 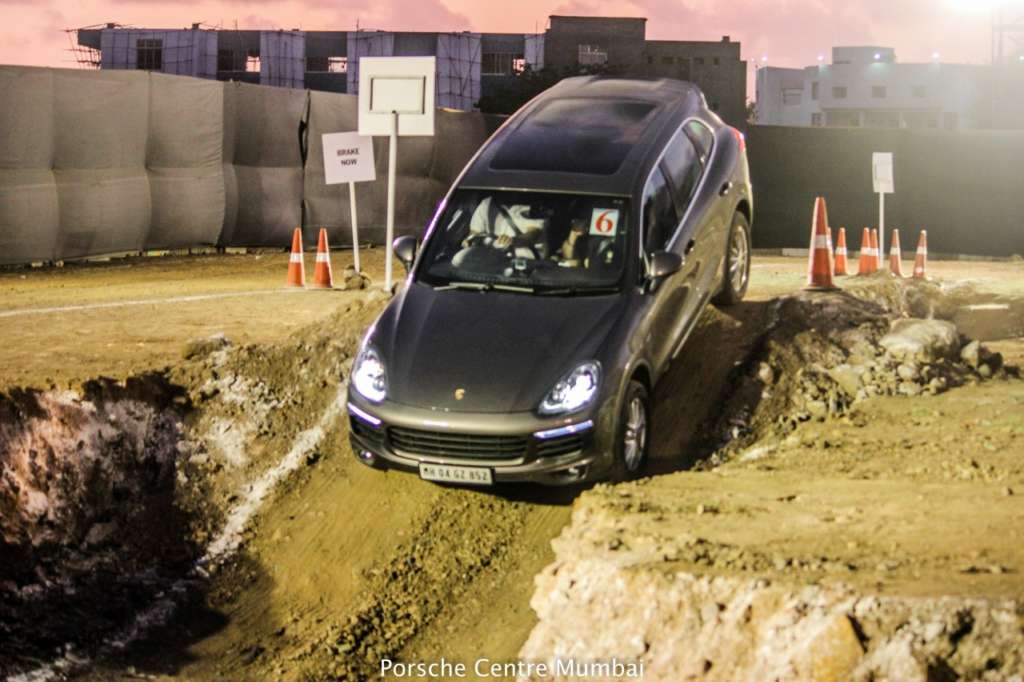 Pretty much the benchmark on the road in their respective segments, the two SUVs demonstrated how capable they are when shown unchartered terrain as well. Several rounds of the course in either of the two SUVs for about an hour made for a day which would be remembered for a long time to come.

Check out an image gallery from the event below