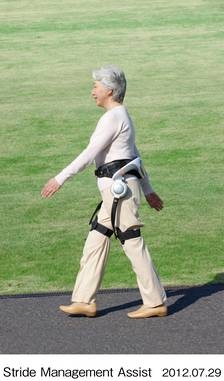 Honda Motor Co., Ltd. announced that the National Center for Geriatrics and Gerontology (NCGG) will feature Honda’s Stride Management Assist device in its new program to assess elder independence solutions, which will begin in late August this year.

The Stride Management Assist device is a lightweight, wearable device designed to support people with compromised walking ability. The results of the NCGG program will be leveraged by the Project to Explore Practical Applications of Service Robots, which is an initiative of the New Energy and Industrial Technology Development Organization (NEDO). One of the goals of the NEDO project is to develop standards for service robot safety technologies.

Established to research the needs of people whose walking ability has declined due to aging, the NCGG program will operate from the Elder Heath Promotion and Disease Prevention Center, which was recently opened up in the Resora Obu Shopping Terrace in Obu, Aichi Prefecture. Honda will provide NCGG with 40 Stride Management Assist devices, which will be used in the shopping mall and on certain designated walking paths. Based on data output from the devices after use, Honda will research the applicability of the devices to elder independence solutions.