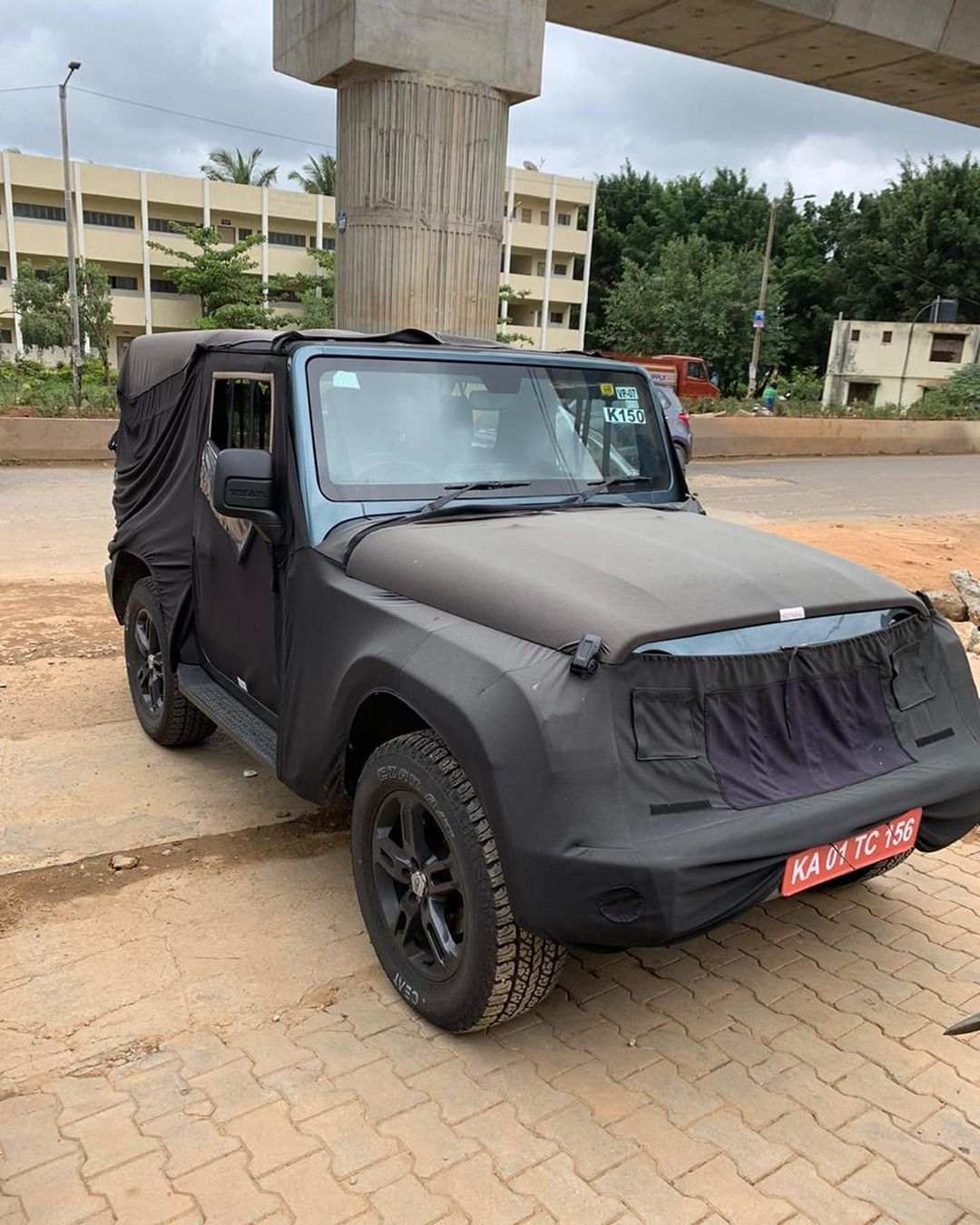 The all-new Mahindra Thar will make its debut as the most exciting launch of this year, when it shows itself to the world on the 15th of August, 2020. The off-roader has been thoroughly updated, inside and out, and promises to be a better vehicle both on and off the road.

Prior to the official unveiling, a set of spy pictures have now emerged which have captured some interesting details about this brand new Mahindra. For what appears to be a hardtop version, we simply cannot get over the fact as to how the new Thar, compared to the older-gen model, looks a much neater and tightly-packaged vehicle. The fact that it has also grown in terms of dimensions should add more to its street cred. 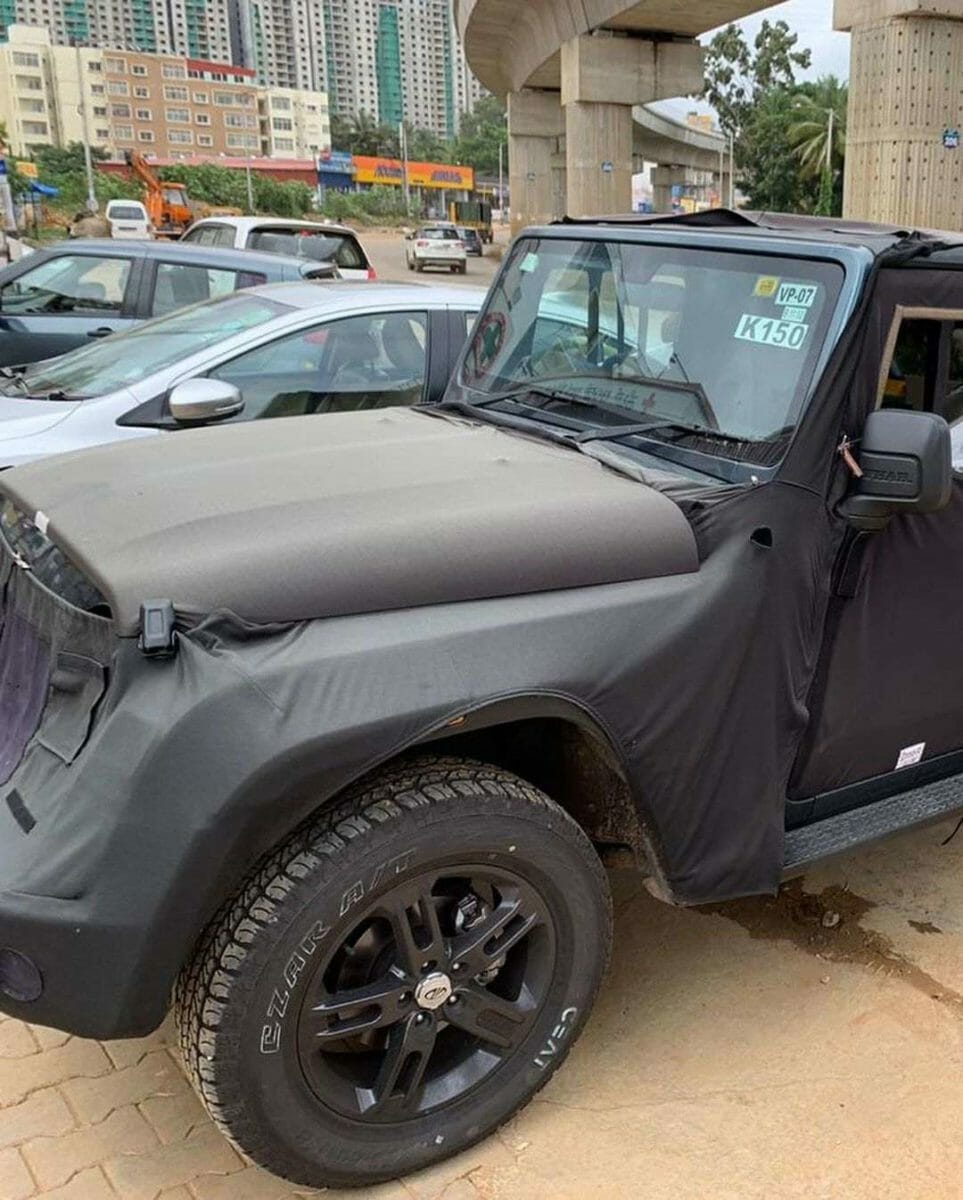 Starting up front, notice how the windshield is wider and is no longer the rubber-lined traditional item which used to allow water to seep through. Also, the front bumper juts out in front of the vertical fascia which is capped by a bonnet which appears to be longer and wider than the one on the older-gen Thar. 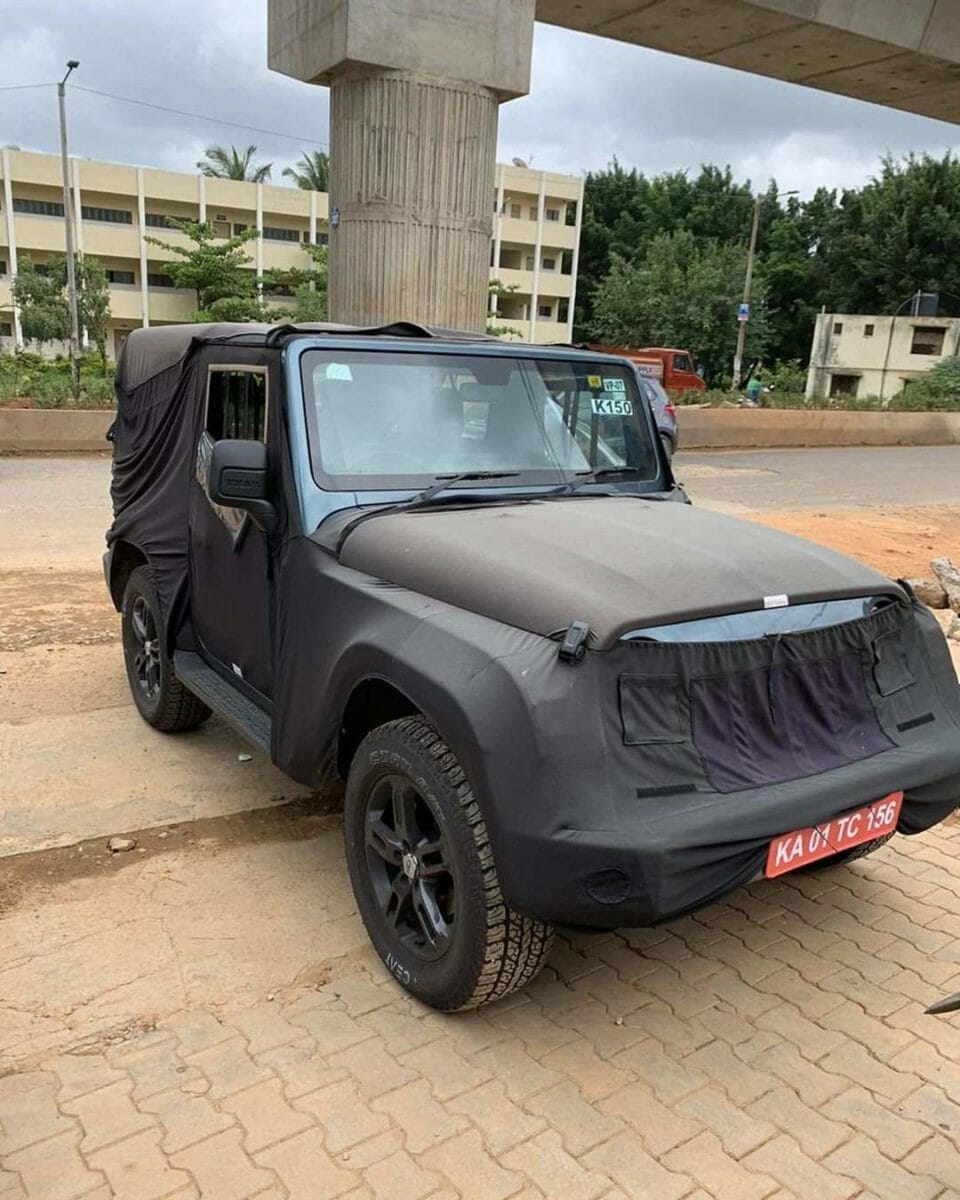 Sideways, the new wing mirrors with ‘Thar’ branding do look great and we love the new alloy wheel pattern and the colour which it has been dipped in. This particular example also gets running boards on the sides so that ingress and egress isn’t too hard and it should also be able to take some beating when a rock-lined trail becomes too narrow. 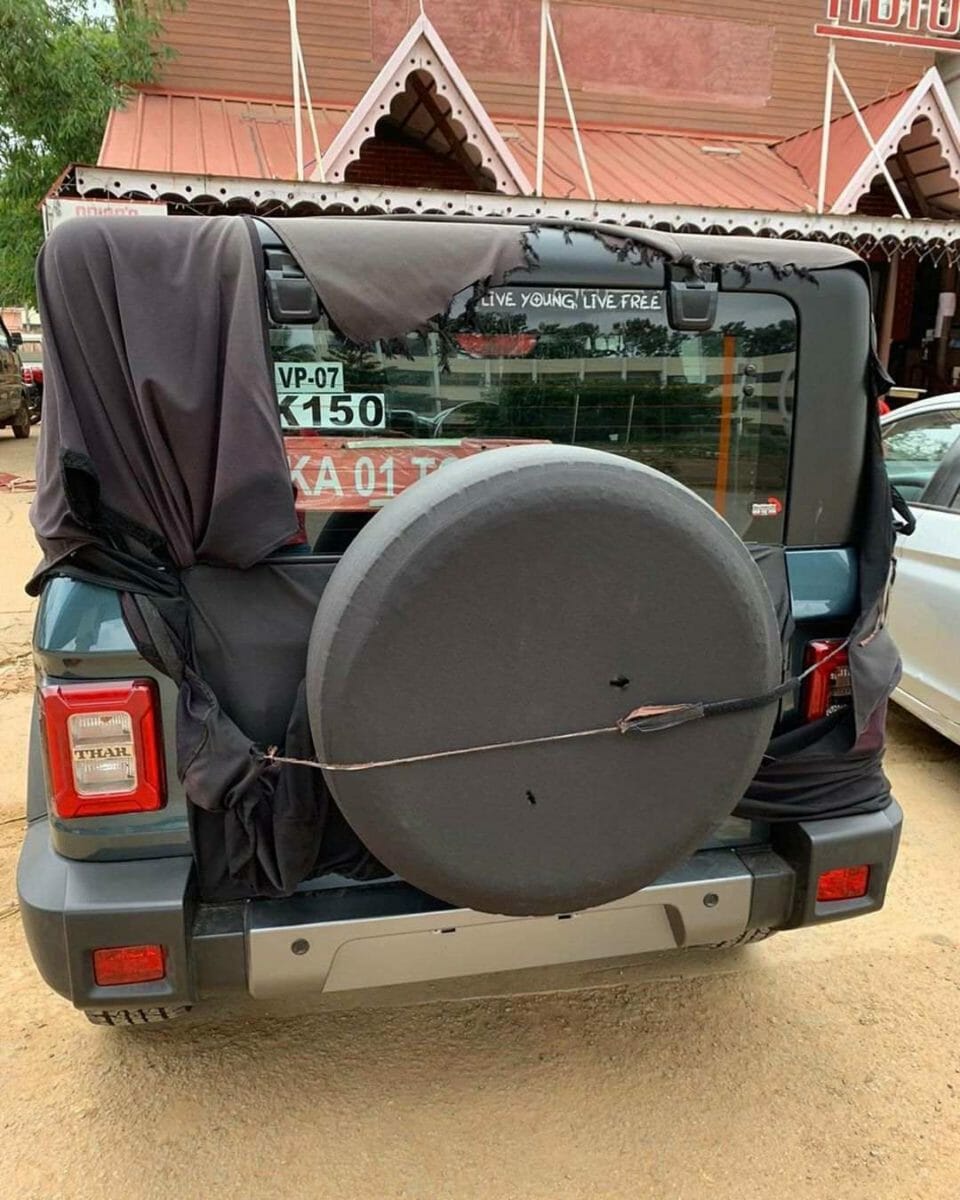 Like the front, the rear too gets a wide glass area (we hope there’s a wash/wipe function. There’s a demister for sure) and a tailgate-mounted spare wheel which we’re sure will be offered with a cover which could be standard or an accessory. Those jerry can-shaped taillights feature Thar branding too where the red area could be illuminated by LEDs. Lower down, the bumper gets a centrally-positioned skid plate which we cannot confirm if it’s faux or actual metal. 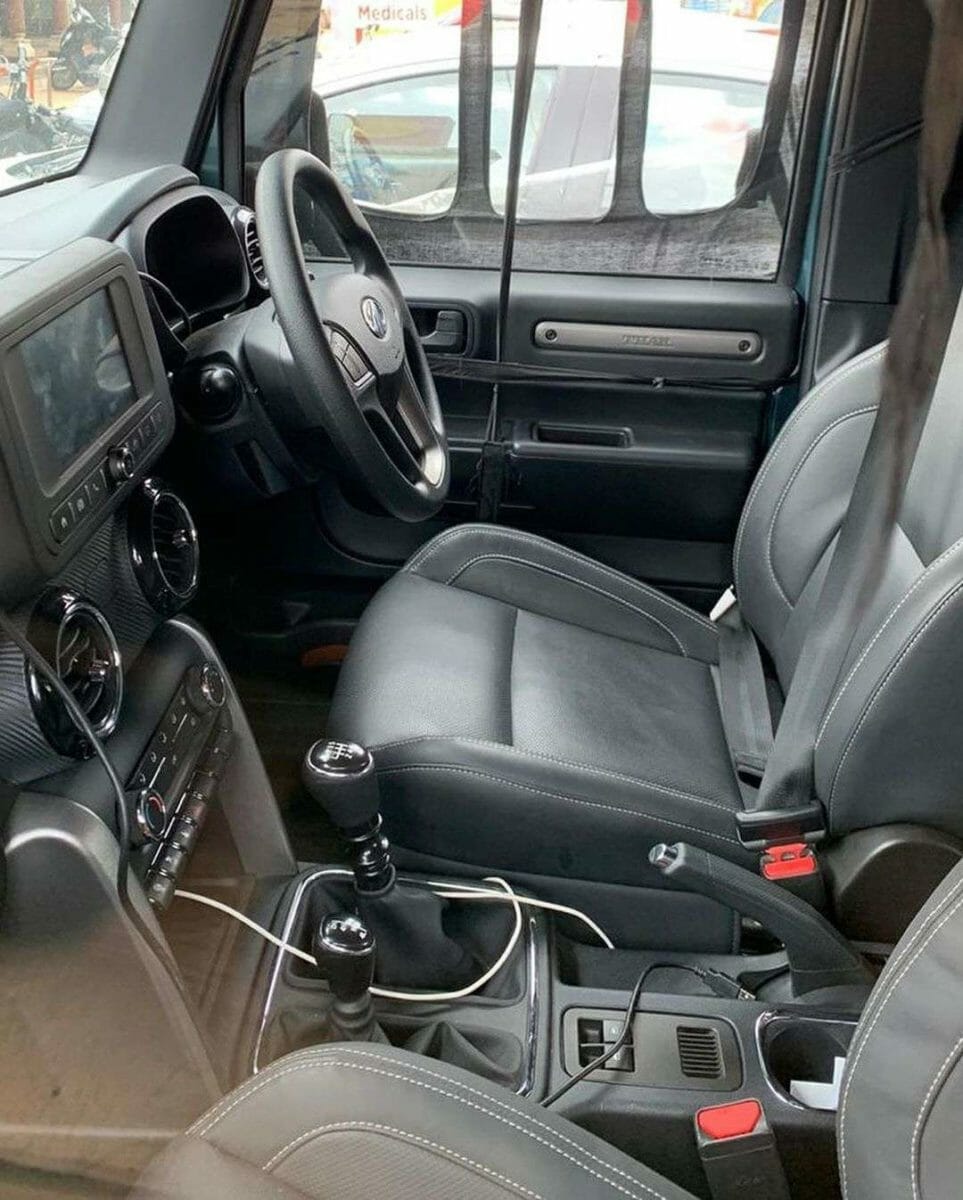 Compared to the older-gen Thar, inside the cabin, things have changed drastically. You’d notice the new steering wheel with controls, a new instrument binnacle, better door pads, a nicely contoured seat, circular AC vents with faux carbon finish around them, modern controls for the air conditioner, an infotainment screen which appears to be surrounded in tough material (it could have an IP-rating, we aren’t sure), centrally-placed controls for the front windows and most importantly, cup holders! We’re sure you’ve already noticed that important lever next to the gear shifter and cables running around to confirm that the new Thar will allow your phone to charge. 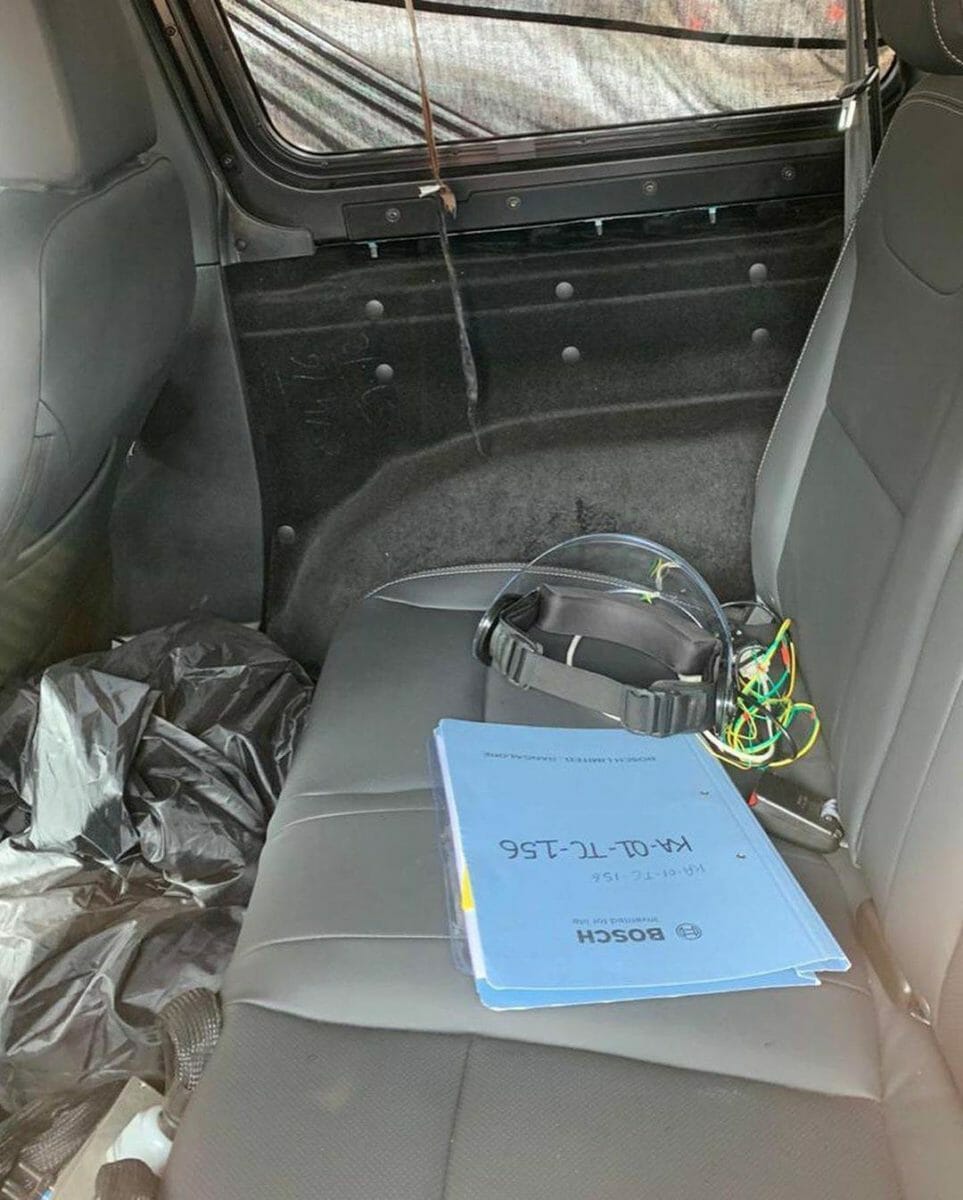 The forward-facing rear bench sits right above the wheel arch. Notice how the front seat’s backrest has been scooped to release more knee room. There’s glass area on the sides for passengers to enjoy the view outside but it’s fixed shut. We hope the rear seats offer a split/folding function to release more cargo area and those exposed screws on the sides are covered in the production version. 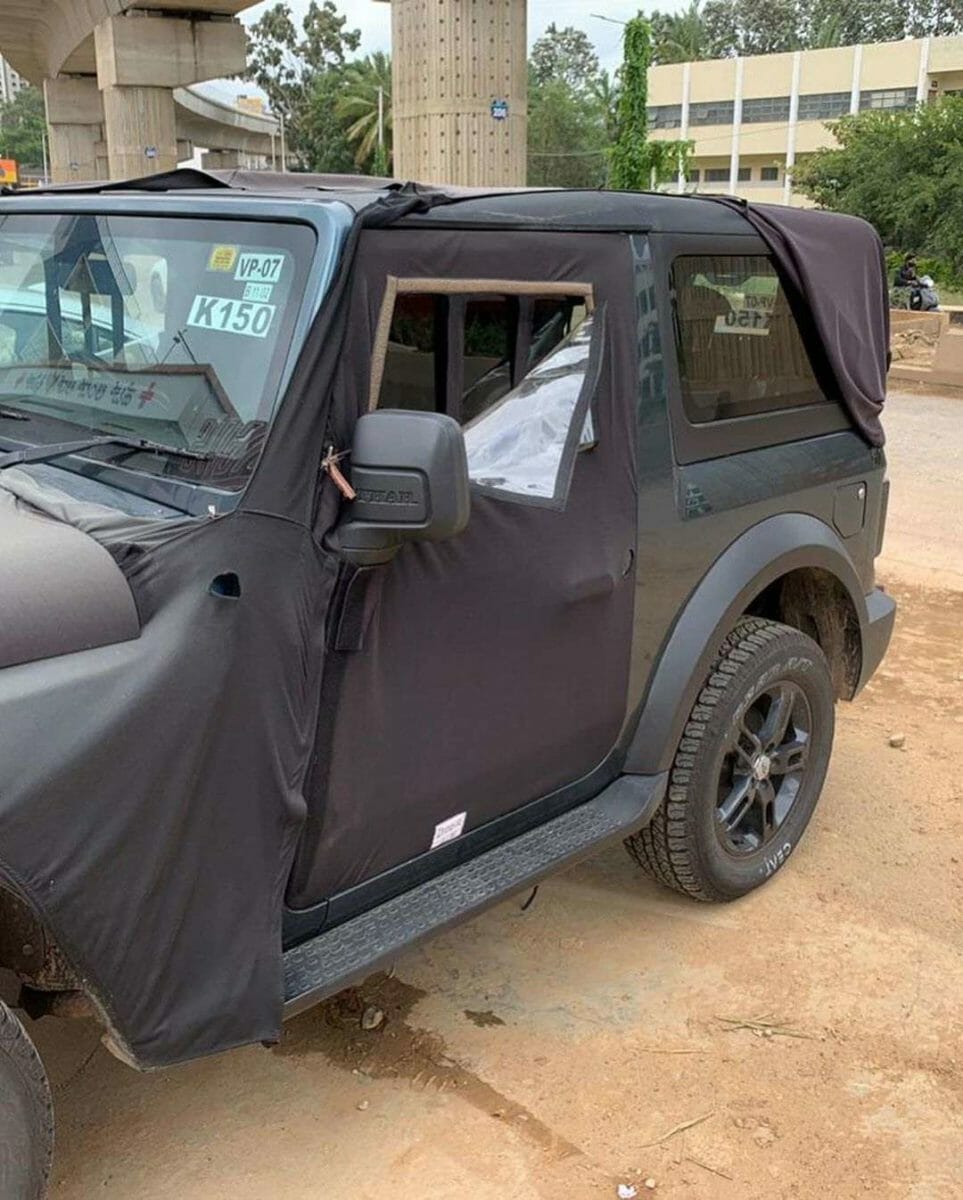 The new-gen Thar is set to be offered with a host of cosmetic and mechanical updates along with a set of new BS6 engines. Unlike the current generation, which is offered only with a diesel engine, it is likely that the new generation will be available with both petrol and diesel powertrains. The new Thar is expected to come with the updated version of the 2.2-litre mHawk diesel engine, which will also power the new generation Scorpio and XUV500. In addition to that, it will come with a new 2.0-litre mStallion turbo petrol engine which was one of the engines showcased by Mahindra at the Auto expo. While the petrol engine is set to produce 190ps of power and 380 Nm of maximum torque, the 2.2-litre diesel unit is expected to produce way more power than the outgoing 2.5-litre unit. This time around, it is also likely to be offered with an optional automatic transmission with a 6 speed manual as standard.

Also Read: Anand Mahindra Shares A Video Suggesting An ‘Off-Road Metaphor’ On How To Sail Past Covid-19

The new-gen Thar will also be suspended by modern components, which we were earlier tipped that it will share with the new-gen Scorpio. The focus will also be to make it a better riding and handling vehicle on the road so that the Thar’s go-anywhere appeal isn’t limited to a hardcore fanbase.