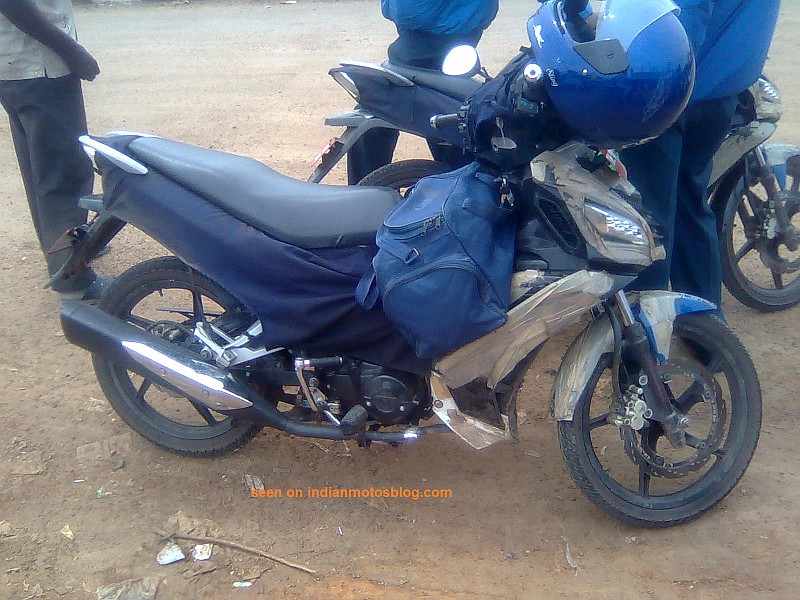 These are the spy pictures of a TVS step thru bike, caught on test in Chennai. The bike, allegedly christened Rockz is a probable India version of TVS step thru which sells in good numbers in Indonesia. TVS, from what we know plans to revive step-thru market and India. Before you start laughing at us for that statement, we would like to put forth the success of Honda in the scooter segment as an example. Everyone thought that the scooter market in India was dead, when Honda’s erstwhile management said that we don’t understand our own market and later proved to us why. You never know, these step thrus may just carve out a nice for themselves owing to their relatively better stability when compared with scooters and cost effectiveness.

If brought to India, the Rockz would be TVS’ first step thru in the Indian market. Even though the generic design of a step thru is not very aesthetically appealing, the Rockz looks nice. These machines are powered by a 125cc power plant producing a peak power of 9.8bhp @7500 rpm and peak torque of 9.8Nm @7500 rpm in their Indonesian iteration. The power and torque figures on the Indian bikes too can be expected to largely remain the same.
Apart from the specifications, the Rockz comes loaded with features which are not available on any of the current mainstream Indian bikes. The Rockz comes with a USB music player cum FM radio. There is also a side stand lock, and an immobilizer for additional security. We don’t know whether these features will make it on the Indian version, although we don’t see any reason why they shouldn’t.
The pricing of this step-thru in the India market has to be very aggressive if it has to revive a dead market. For such a product, which would, from what we think be perceived as a notch below a proper motorcycle in the market, a price of Rs 45K should be the upper limit (preferably even lower). Anything more and the people would turn away. Hope TVS manages to meet that price point if and when it launches the product in India