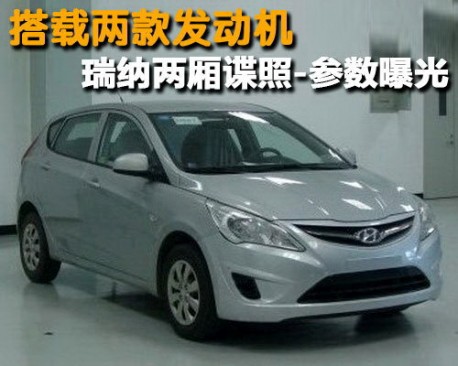 The new 2011 Hyundai Verna Sedan has been through a long journey of speculations, scoops and spy pictures. The 2011 Verna sedan featured a new ‘fluidic flow’ design which is now carried over to the 2011 Hyundai Verna Hatchback. The car was recently caught undisguised which reveals its similarity with the Sonata YF Sedan.

As compared to the Verna Sedan, the 2011 Verna Hatchback has been designed in a slightly different manner. The grille in the front is a tad simpler and has a redesigned bumper. The indicators on the Outside Rear View Mirrors (ORVM) have been deleted in the hatchback version of the Verna. 4.08 mtr x 1.70 mtr x 1.46 mts are the dimensions of the car while the wheelbase of 2.57 mtr has been left unchanged. The car may bear a 1.4 litre or a 1.6 litre petrol motor under the hood that churns out maximum power of 107 BHP & 122 BHP respectively. The car could also be available in both manual and automatic transmission.

The car is expected to hit the streets of China by next month after which it will be launched in other markets. The Hyundai i20 is presently enjoying loads of success which is why the car may not be launched in India as of now.