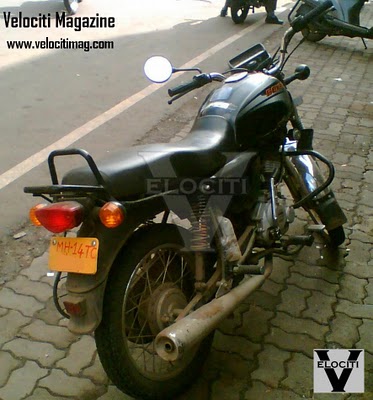 Seems like Bajaj Auto is planning to revive the Boxer brand – an entry level bike that sold in great numbers initially. These spy pictures of the new 2011 Boxer were taken my Velocitimag around the outskirts of Pune. We have heard of Bajaj trying to re-enter the absolute bare-basic 100cc commuter motorcycle segment with a new product, and the new Boxer may just be the company’s new tool. The Boxer may just be Bajaj’s reply to TVS’ Max 4R which is targeted squarely at the rural market.

In its newest avatar, the Boxer seems to have been beefed a little visually by the design guy at Bajaj so as to make it look more solid. The tank is rounder and bigger, to make the bike look more sturdy. Comparing the new bike with the old one, it’s quite evident that the major change in the tank only. Other components including suspension, engine and instrumentation (although some variants had a different twin pod instrumentation) look similar, at least visually. Looks, however, can be deceptive and Bajaj may just have gone deeper than just the skin while developing the new Boxer. The tail-lamps on the new bike look slightly bigger than the older one.

Don’t expect any big surprises – this will be a regulation, run-of-the-mill workhorse which will do the duties of hauling you around from point A to B with mind-boggling fuel efficiency figures that we are all used to. Power would be in the region of 7-8 PS, and the price would be around Rs 40K if the market trend is taken in view. Stay tuned for more updates