Royal Enfield began venturing into newer motorcycle segments with the introduction of its Continental GT Cafe Racer. And now, the two-wheeler manufacturer plans to foray into the adventure segment of motorcycles and is thoroughly testing its upcoming offering, the Himalayan on Indian roads. Poised to be an adventure tourer, the upcoming Royal Enfield Himalayan will receive an all new engine, rumored to be a 400cc single block air-cooled unit, a bored out version of the current 350cc motor. The new engine is also expected to benefit from fuel injection rather than a carburetor setup. The torque output figure is expected to be 40Nm, nearly 12Nm higher than the current 350cc engine. 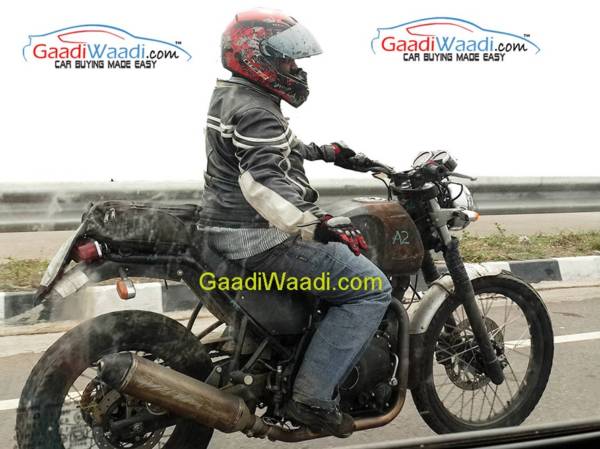 In November last year, Royal Enfield had roped in Pierre Terblanche, one of the most respected motorcycle designers responsible for products such as Multistrada, SportClassic, Hypermotard, and the 749/999 supersports bikes. So we expect to see some really exciting, drop-dead gorgeous machines rolling out from Royal Enfield’s workshops in the near future and the Himalayan will be one of them.

Latest spy images reveal many new details about the upcoming Royal Enfield Himalayan. The motorcycle was earlier spotted in South India and this test mule is not much different either, except for one attention grabbing update, the sporty exhaust. The earlier test mule carried a Continental GT style exhaust while this latest test mule receives an upward swept, two-tone exhaust. The new images also reveal the handlebar and instrument cluster that the Himalayan will come equipped with. As seen in the image, the handlebar is a single unit, blacked out unit with space for bar-end weight. The instrument cluster also appears to be borrowed from the cafe racer and so is the headlight. 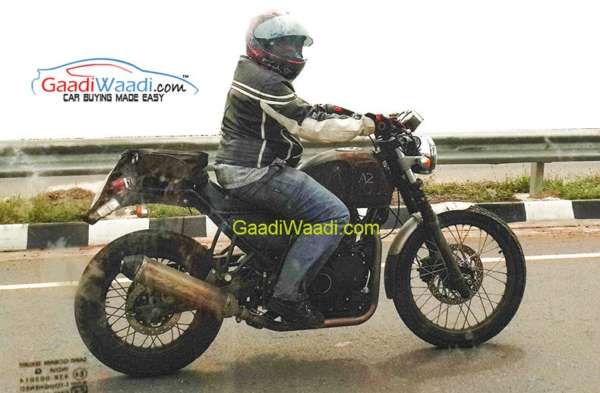 Other features, as we reported earlier, include blacked out front forks (with dust protectors) and fender borrowed from the Continental GT, a monoshock suspension at the rear and a new fuel-tank. The motorcycle also appears to be the tallest Royal Enfield product which should help the owners tackle uneven surfaces without scraping the power plant. The ergonomics, similar to many Royal Enfield motorcycles, appear to be straight-forward and relaxed that is likely to help the riders munch more miles between intervals.

Royal Enfield has reportedly applied for a trademark in India and Europe for the name ‘Himalayan’, and has marked titles such as ‘On-off Roader’, ‘Off-roader’, ‘Adventure tourer’ and even for a ‘Scrambler’ for this upcoming motorcycle. The launch is expected to happen next year. We would keep you posted about this upcoming motorcycle so stay tuned for more updates.