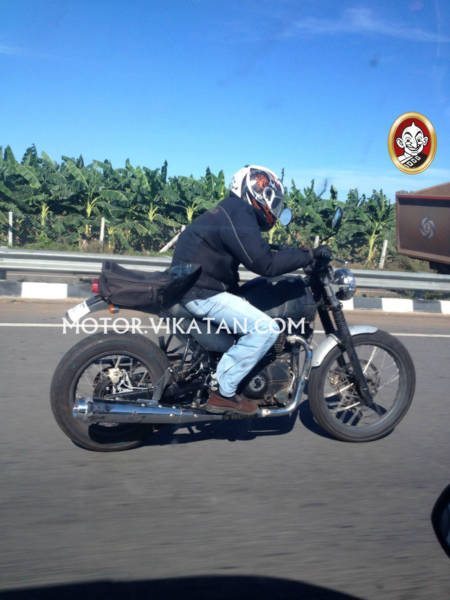 After a lot of hushed murmurs, rumors and speculations, the Royal Enfield Himalayan has finally revealed itself. Spotted testing in the sunny climes of South India, by the looks of it, this RE contraption with a mystical name is definitely going to be an adventure motorcycle. Looking at the pictures, the biggest visible change is an all-new engine, which could be the rumored 400cc motor that has been in the works. A bored out version of the current 350 cc motor, according to reports, the new engine could produce as much as 40 Nm of torque, which is 12 more than the existing powerplant. Dissecting the design, front forks are blacked out and look like they’ve been borrowed from the Continental GT, as is the fender. In order to maintain the black theme and protect the forks from dust, they also get dust covers.

Rims are painted in black and the front disc unit seems to be borrowed from the Conti GT. Although looking at the frame it might seem like it has been borrowed from the cafe racer too, it seems to follow a different architecture altogether and comes across as a single down-tube unit which bifurcates mid way to hold the new motor. The fuel-tank too looks like an all-new design, whereas the rider sits on a rather high-positioned seat. 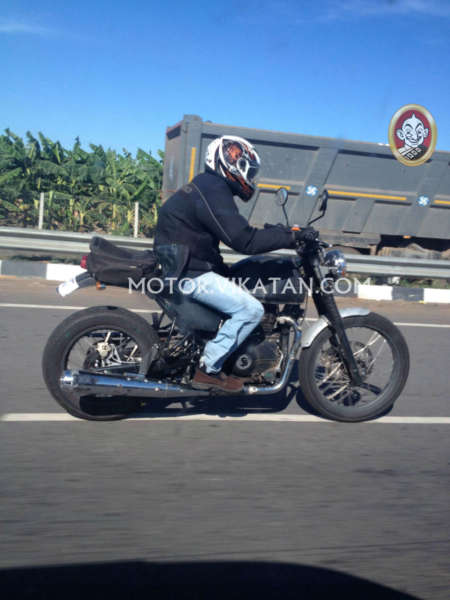 The handlebar comes across as a single pipe, pulled slightly towards the rider in favor of comfort, while the instrument cluster could be a compact unit, as it isn’t even peeping out of anywhere in the picture. Another big change is a rear monoshock that has been bolted onto a box-section swingarm. Like the Continental GT, the Himalayan also gets a rear disc brake, however, the fatter (likely 140section) rear high-profile rubber seems to be an all new design never seen before on REs.

Illumination bits at both ends look similar to RE’s cafe racer. Rumored for launch next year, the Royal Enfield Himalayan should make an appearance at the Auto Expo next year. We’ll keep you posted as and when we hear some more about this Yeti, stay tuned!