How much power is too much? Don’t bother to put in more thought because men thirst for power. As Oracle told Neo in The Matrix Reloaded movie – What do men with power want? More power. So no matter how much power one receives, he always thrives for more.

Porsche seems to follow the same rule with its rear mid-engined, rear wheel driven 2-seat luxury sports car, the Cayman. The 2007 variant made about 241 bhp of power and 273Nm of torque. Then Porsche introduced the Cayman S Sport which churned out 298 bhp. Now, with the Cayman GT4 model, the German manufacturer plans to take things to a whole new level. 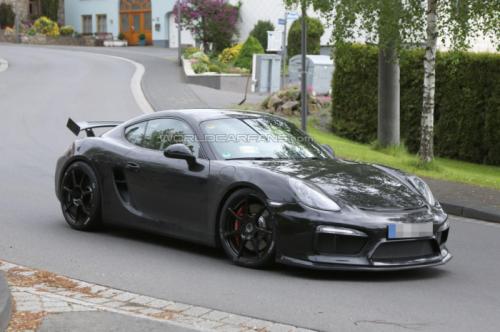 The 2015 Porsche Cayman GT4 coupe was snapped while it was being tested near Nürburgring in Germany by car magazine’s photographers. The GT4 will be the first factory-finished turbocharged Cayman.

According to the Car Magazine, the GT4 will house a powermill of 3.8-litre twin-turbo boxer six engine that would be tweaked to produce 450bhp.

The new Porsche seem to be hitting the gym with an extra-dose of steroids as spy images reveal a more beefed up car. And, no matter how much may try to look over, the huge, track-spec rear wing grabs the attention. 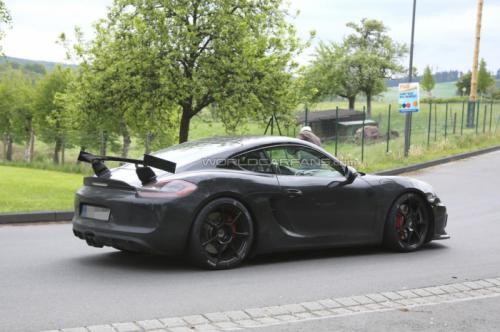 Apart from borrowing the powermill from the 911 Turbo, the Cayman GT4 will come bigger vents and uprated brakes. Suspension arrangement is expected to be on the stiffer side given the car’s sporty nature. A functional rear diffuser, unique alloy wheels and centrally-mounted dual exhaust pipes are also expected to be seen on the GT4.

It was be safely assumed that Porsche Cayman GT4 will make debut some time next year.

What do you think of the Porsche Cayman GT4? Share your thoughts through comments below.