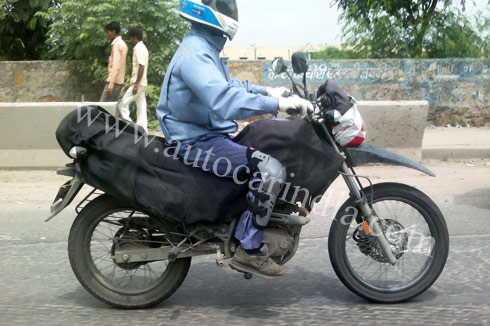 If you have been following us regularly you would know we reported to you that Hero Honda which post break up has become Hero MotoCorp will be launching a dirt bike for the Indian market. Today we have got spy images of the upcoming first venture from the Hero Motocorp.

The spy image of the new bike comes from Uttarakhand and has been snapped by Prateek Khandelwal. The bike totally follows the retro dirt bike image and is meant to survive the potholes and undulating Indian roads and climate. It will feature a tall telescopic front suspension with a monoshock for the rear suspension. It will also sport retro styles spoke wheels as we can see in the image. Then there are massive body panels, high mounted mudguards and a visible high set fuel tank. We expect a four stroke engine with a single cylinder which will be air cooled and displacement can be anywhere between 150cc-200cc. Expect a five speed gearbox and a naked chain drive system.

On a whole It looks like a bike you can take almost anywhere on any terrain. What will be really interesting is how people receive Hero Honda in its Hero Motocorp avatar. With the Hero Honda JV having been so strong, it has a very high brand recall value. Wolff Olins of the Omnicom group has assisted Hero MotoCorp don their fresh brand identity, while Law & Kenneth is the company’s creative partner.

Very soon by August 9, 2011 Hero MotoCorp will inform us about their future strategies in an event at London UK. Stay tuned as we will keep you informed about new developments about Hero MotoCorp.