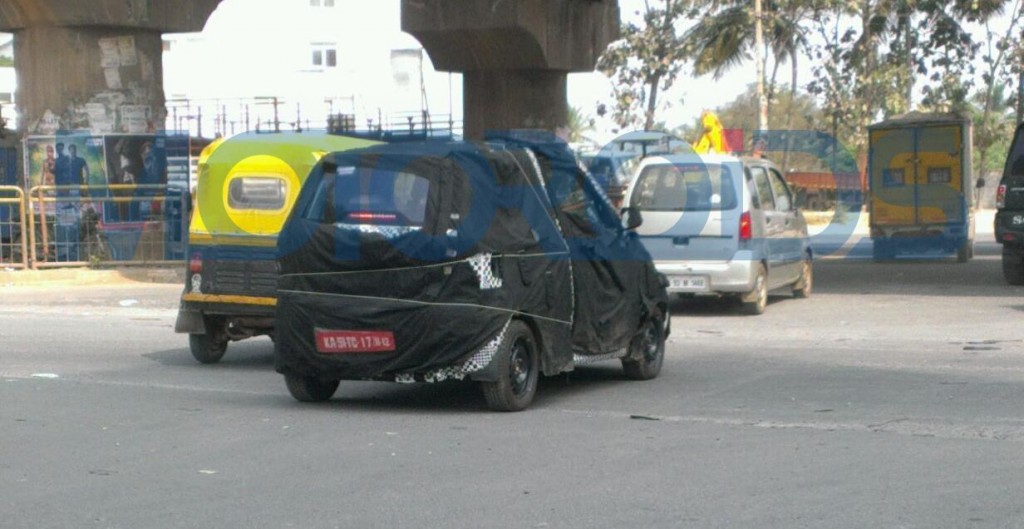 India’s indigenously developed electric car, the Mahindra Reva E2O, may soon be joined by a four door variant. While there is no official confirmation from Mahindra, the Indian UV and SUV giant, it is highly possible that the company may sell the four door version of the electric car in the subcontinent. According to reports, the India made four door Reva would be meant essentially for export to the European market.

The car, currently undergoing pre-production test runs, was spotted by Motoroids reader Harshith SV in Karnataka. The vehicle was covered under heavy camouflage, thus we could not see much details. However, the wheelbase appeared to be slightly longer than the two door Reva while the tail light setup also seemed to be tweaked. The four door version should offer more space, luggage capacity and thus better utility  to the Reva and attract the attention of a wider audience base, especially for the space conscious market of ours.

Mechanical details are not likely to differ from the two door variant and the four door Reva is expected to be propelled by the same 48V Lithium-ion battery with power output is 25.5 bhp and 53.9 Nm of torque.

Mahindra plans to extend its electric car portfolio with new products. The company showcased electric Maxximo minivan at the 2014 Auto Expo and was also reportedly planning a electric version of the Verito sedan.

While no specific details are out yet, Mahindra may reveal more new electric products at the upcoming 2016 Auto Expo. Expect the new four-door REVA to also be present among the Mahindra lineup at the event. Count on us to bring you all the updates from the grand motor show as and when it goes underway.

While we wait for the motoring event, share your views about the four door Reva electric car with us through the comments section below.