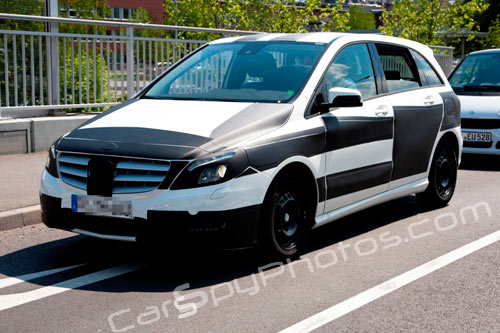 Here we have the first spy images of the 2012 Mercedes Benz B Class, which is slated for the Indian launch in the next 2-3 years. Audi and BMW have been giving M-B some real tough time and to increase the sales numbers they will have to find a new way out. The apparent solution for the three pointed star is to get into the relatively cheaper compact segment with the A as well as the B class compacts.

The 2012 B Class is a straight rival to the BMW 1-series.  The B Class is rather simple design and on close inspection you will find some resemblance  the M-B family car the R-Class.  If priced aggressively this car may attract a lot of  people who wish to own a Mercedes Benz on a budget.

There are talks of a AMG version of the B-Class and you can expect it to kick some real power with a V8. The A & B Class can be the real game changer for Mercedes Benz and the sooner they get it, the better for them.