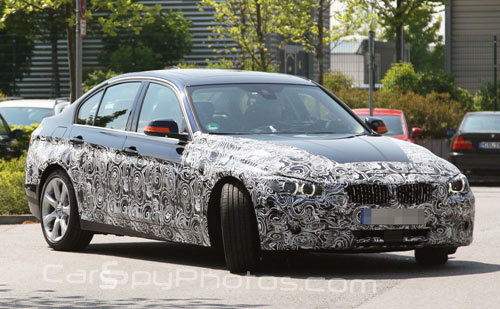 The 3 series BMW badly needed a make-over, with the new 5 & 7 series the 3 series appeared to be left a little side-lined. Not any more as BMW is ready with a new 3 series and a test mule was spotted recently.

The new 3 series which is codenamed F30 has incorporated features like day-time running LED lights and the square angled headlights. In the design department, the new 3 series looks more like a scaled down 5 series. It also looks lower and longer than the car it is meant to replace.

On observation on the front you will see that the trademark BMW kidney grill looks more flat plus there are LED signal indicators on the side mirrors. This car is said to share a lot of its parts with the new BMW X3 which will also feature host of new gadgetry like Head Up Display, Rear view camera, lane departure warning, parking assist, lane change assistance and  eight-speed ZF automatic transmission which will maintain the  thin line between performance and mileage.

Under the hood we can expect 4 and 6 cylinder engines where the 6 cylinder will translate power figures to a max of 350hp. 2012 BMW 3 series should debut in the 2012 Geneva Auto Show and after its international debut it will make way in India by end of 2012. In India the 5 series is the most loved Beemer looking at the sales figures, with a new approach in design and innovation the 2012 BMW 3 series is expected to please many.

What do you think about this new beemer ?