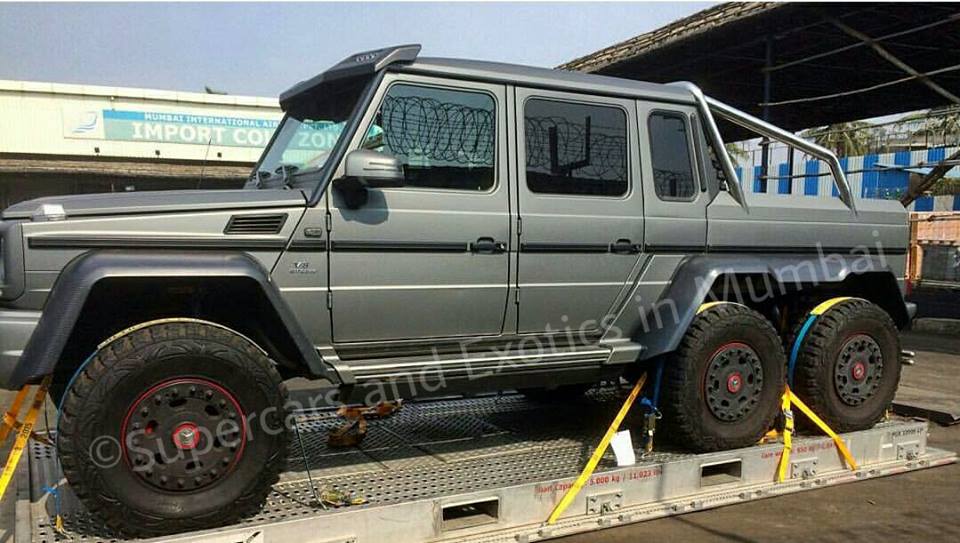 Somebody just called for a mighty, matte grey finished Mercedes-Benz G 63 AMG 6X6 in Mumbai, sending our jaws hurtling to the floors. The Mercedes-Benz G 63 AMG 6X6 is a rare beast. It’s exclusivity, sinister appearance and leviathan proportions have lent it an exotic status, which means that it’s perfectly at home in contrasting environs – be it posing next to the priciest hyper-cars across London, Paris and New York, or blasting some dunes in the Sahara desert.

Since Mercedes never made one of these with a right hand drive configuration, we’re led to believe that this example has been imported into the country via the Carnet scheme, which means it’s here to stay for a while. Also, the short series production intended for this brute has already ended, with all examples sold out. In its place, Mercedes has bought in an equally potent, but more sanitized G500 4×4 ².

The Mercedes-Benz G 63 AMG 6X6 is 3.85 tonnes of badassery held up by three portal axles with gigantic 37″ tires at each of their ends. It can surreptitiously wade through 3 feet of standing water, or even reach 100 km/h from a standstill in just under 6 seconds, with the AMG 5.5-litre V8 biturbo inflicting 536 hp and 760 Nm of twist to the six driven wheels via a 7-speed automatic transmission.

Other terrain bashing hardware includes five differentials which can be locked while on the move and a tyre pressure control system that operates at world-record speed. Of course, every inch of the interiors are trimmed like a proper Mercedes-Benz, with swathes of leather in contrasting topstitching and diamond pattern, along with four electrically adjustable, heated and ventilated individual seats.

At over 5 meters long and almost 2.30 metres high, competition for the G 63 AMG 6X6 in Mumbai will come from the BEST buses. Reports also suggest that this particular example is also fettled by Brabus, but there are no visual cues on the outside to confirm that.

Source: Supercars and Exotics in Mumbai