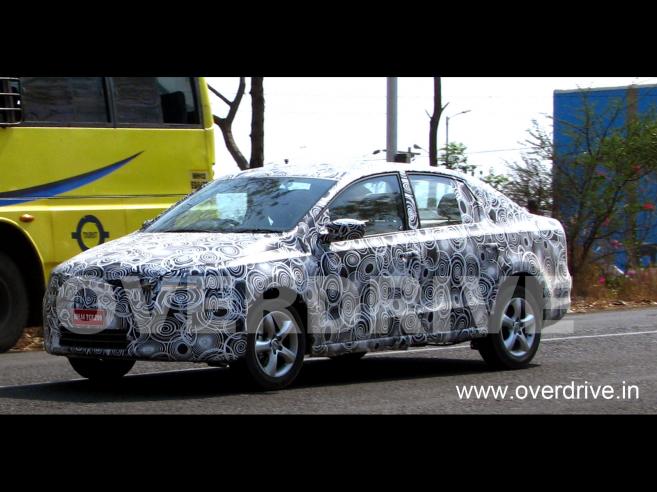 Overdrive, one of the leading car and bikes magazines in the country, has managed to take some of the clearest pictures yet of the upcoming Skoda Fabia sedan of the Rapid. The new car, draped with heavy camouflage painted in black twirls over white background seems peculiarly similar to the Vento in terms of proportions. The resemblance becomes even more evident when you look at the car in profile. A prominent shoulder line, and a pronounced crease slightly above the door sills running across the doors – gives away Rapid’s relation with the Vento. The wheel arches too have a chiseled, muscular look to them, surrounding handsome looking five-spoke alloy wheels

The grille of the car, as revealed by these spy images, is similar to that of the Fabia, and so is the central air-dam on the bumper. This hints at no major departure from the current design philosophy for the new model. It’s notable that the Rapid was expected to draw heavily from the Vision D concept shown in the Geneva 2011 Show, but Skoda seem to have chosen the safer route of sharing the design with the Fabia, and its parts bin with the Vento.

The exterior proportions also hint at a capacious boot, which is always a great thing to have in the Indian market. The length of the car suggests reasonable space for the backbenchers, which should be par with the segment.

Under the hoot, the 1.6-liter petrol and diesel engines found on the Vento will do the propelling duty. Both the engines produce 105PS of peak power, but the diesel produces around 100 units more of torque at 250Nm.
We can expect a DSG AT variant for the Rapid too, just like the Vento. The Vento is not available with the auto transmission for the diesel variant. Hopefully the Rapid will have the option.

Prices, as you would reckon, are still guesswork, but following the trend across all VW and Skoda models in various segments, the Rapid, in all probability will be priced lower than its German cousin. The margin, won’t be too much, but there would certainly be a difference. No clarity on launch dates either, but the 2012 Delhi Expo should be a terrific platform for the car to make a debut. Head over to Overdrive.in for more images of the car