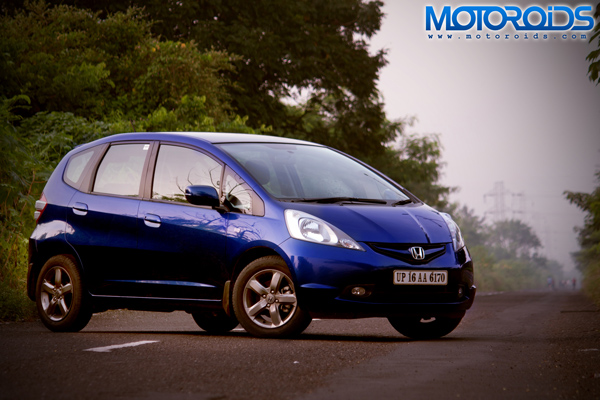 Got the following comment. We don’t whether this is some one from Honda, but this is what it says:

Honda Car India
There is no change in the ex-show-showroom prices of Honda Jazz. The offers available in the market are part of sales promotion on some limited variants in limited volumes available with some dealers for limited time.

After the City, it’s the turn of the Jazz. The effect of the City price cut was evident on the sales of the sedan last month, where it managed to overtake the Vento once again after having been toppled over by its German rival in the previous two months. The new Hyundai Verna beat both the models to sit pretty as the leader of the pack in its very debut month.

But regaining some sales volumes back with a RS 60,000 price cut seems to have put some sense into the think tank at Honda. The company has now reduced the price of its Jazz hatchback by upto a whopping Rs 1.75 lakh rupees. Now that price cut may come across as a game change of sorts for the big and pricey hatchbacks such as the VW Polo, Fiat Punto and Hyundai i20. The new pricing may bring the Jazz back into the game as no one ever doubted the credentials of this car. It was just that it was way too expensive for its shape in the Indian market. These discounts may just be offered as a facelifted version of the hatch is slated to be launched very soon. We showed you the spy pictures of the facelifted version a few weeks back, Click Here to read the story about the Jazz face lift.

Honda dealers have unofficially been giving discounts to the tune of upto Rs 50,000. In addition to the discounts they have also been throwing in freebies to lure customers, and failing at that, as even after those discounts the price of the hatchback is quite high when compared with its rivals.  But with the corrected prices, the Honda showrooms should see a lot of customers stepping into their showrooms, as the Jazz is clearly the best hatchback in its segment if we don’t talk price. Its got the most amount of space, it’s got the class leading petrol engine, its got a fabulous interior quality and flexibility and most of all, it’s got the much desired Honda badge on its grille.

While we are yet to get an official notification from Honda about the development, a rough estimate suggests that with the new prices in place, the Jazz could sell at a price as low as Rs 5.5 lakh ex-Delhi. Now, who in his sane mind with a budget of Rs 6 lakh for a petrol hatch would look at anything else?

Now, there are three things that we want to say after having a look at those figures:
a.    To those who want to buy a hatch: Rush to the nearest Honda dealership now!
b.    To those who have already bought a Jazz: Our condolences