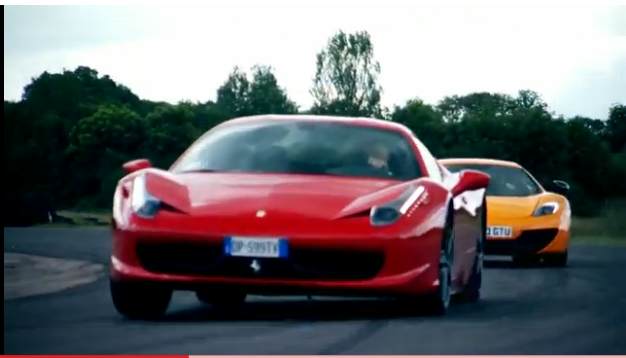 A few days back we showed you an episode from Fifth Gear, where Tiff Needel and his co-host took the MP4-12C and the Ferrari 458 on a racetrack. And their verdict was clear – the MP4-12C is way too twitchy and beastly to come close to the refined Ferrari. Also, the MP4-12C according to the hosts at Fifth Gear, is not half as much fun as the Prancing Horse.

But as we all know, no comparisons of such supercars are complete without an old man called Jeremy Clarkson behind their wheels. Not because he is the best judge of a car’s engineering, or any other aspect for that matter, but because he has a sense of humour that would shame the best stand up comedians in the world. If you love cars, if you are a fun person, and if you never get too emotionally attached with a particular brand or a car, then you have to watch Top Gear for the sheer celebration of visual and aural senses it is.

Now it’s no secret that Jeremy has a liking for all things British. If you go by his advice, even a British made bullock cart is faster than a German hypersonic plane. But the way he says it, makes you laugh whenever you think about it. Like always, he’s very clearly pro-British, and hence pro-McLaren in many ways, though he exercises some caution this time as it’s the F458, one of the greatest sportscars ever made he is pitting his British beauty against. The show, like always ends with a power lap. And like always, you have to tell us which of the two cars is quicker around the Top Gear track before you play the clip. Enjoy the video!