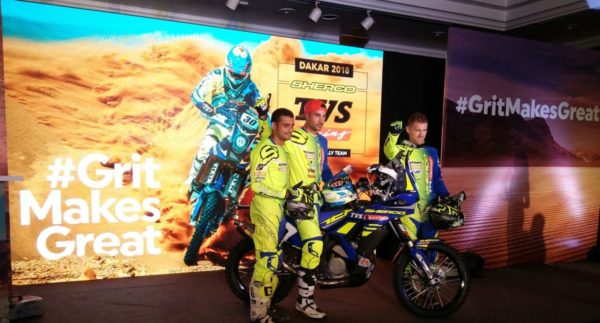 Dakar 2018 is the 40th edition of the annual international rally-raid, and Sherco TVS Factory Rally Team will be participating in the event for the fourth consecutive year. The rally will be held from January 6 to January 20, 2018. This year, the rally will cover three countries, beginning in Lima, Peru, and passing through La Paz, Bolivia before finally culminating in Córdoba, Argentina, after having traversed a total distance of over 9000 km.

This will be the second time that Aravind KP will participate in Dakar Rally. Joan Pedrero will be participating for the ninth consecutive time, and this will be the third Dakar Rally for Adrien Metge. The Sherco TVS Factory Rally Team participated in four international rally-raids this year – Baja Aragon, Merzouga Rally, PanAfrica Rally and OiLibya Rally of Morocco – with strong finishes in each.

Speaking on the occasion, Vinay Harne, President – New Product Development, TVS Motor Company, said that their partnership with Sherco for Dakar has been a hugely rewarding experience for their racing team. They have supported Indian riders and engineers in competing in international events, and this has resulted in immense learning for both the partners. They wish the Sherco TVS Factory Team the very best.

Thomas Teissier, General Manager, Sherco Motorcycles, said, “This is the fourth year of our partnership, and with each passing year our preparation for Dakar has become more focused and fierce. We have a strong relationship with TVS Racing, and we have worked together on the existing team structure. We are excited to have Aravind KP in our team again. The preparation has been good so far, and I have full faith in the abilities of our team for Dakar 2018. The preparation in the last two months before the race will be very crucial, and I am sure that the team will perform to the best of their ability.”