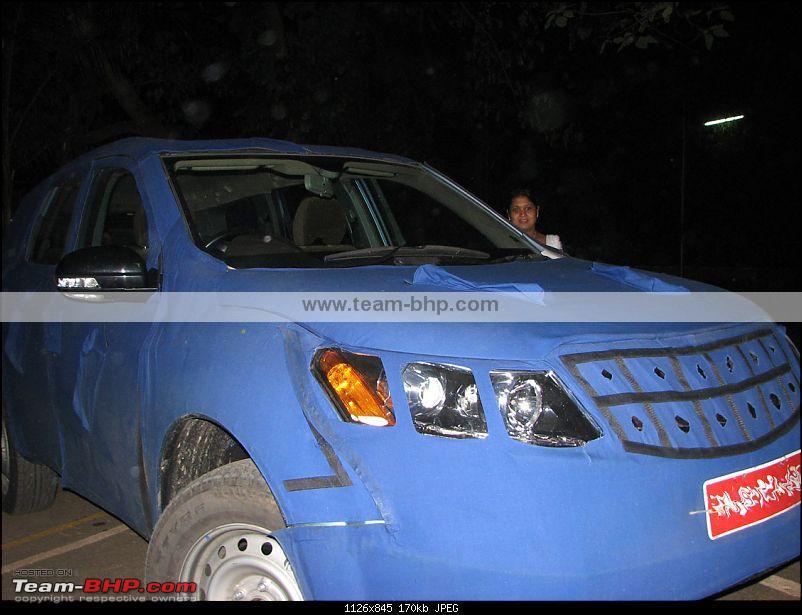 A bloke called ‘Ajithbc’ on the Team-Bhp forums has managed to catch a few more snaps of the Mahindra W201 World SUV and this time around, what we have are detailed images of the the interiors of the new SUV! The interiors don’t look too inviting as we would have expected, however, we are sure if not the design, the fit and finish will improve ten fold since the components you see are still under test. According to various sources we have some new revelations about the upcoming SUV. Since the Tata Aria and the upcoming 2011 Tata Safari will be the top competitors for the W201, the Mahindra will come equipped with a GPS unit similar to match the one seen on the Aria at the 2010 Auto Expo. Further more, the Mahindra W201 is expected to mate its engine to a six-speed transmission, not only to have an upper hand over its competition, but to be on par with its competitors in the global market as well. To tackle the Indian road conditions better, the W201 is said to have incorporated a semi-Active Suspension Control module which constantly monitors the road, speed and braking characteristics to maintain optimum damping and comfort. The suspension will also allow the user to choose from three different settings – soft, medium and hard, for better comfort and/or handling. Check the images below:

Flip through the next pages for scoop videos, photos and more information about the W201>>>

Update 3 (28th July 2010):
Thanks to amit_mechengg from Team-Bhp, we now have even more photos of the Mahindra & Mahindra World SUV codenamed W201. These are also one of the first images to show a glimpse of the W201’s interiors. The console looks like a two pod layout with chrome lining on it. We expect more chrome garnish in and around the car to lend an upmarket feel. we also have reports that a couple of W201 mules were also spotted near Pune which could mean that the car is undergoing its final ARAI testing procedures. Stay tuned as we bring you more info on this car as and when it is available to us…

Yesterday we told you that one of our readers had reported the presence of Mahindra & Mahindra W201’s latest test mules on the Sriperembadur highway near Chennai. Close on the heels of that report, we now have photos of the test mules he mentioned, thanks to our friends at Team-Bhp. Similar to what our reader reported, the test mules had been camouflaged in psychedelic design vinyls to hide the body lines of the upcoming ‘World SUV’ from Mahindra and Mahindra. Since the images are not very sharp, its hard to spot the presence of daytime running lights. While there are some speculations that this mule might infact be a Nissan Murano and not the Mahindra W201, we would like to point out some similarities between the test mule and the photos posted earlier.

1. The front bumper on new test mule and the photos shown earlier is the same in terms of size, design and specification. The Nissan Murano on the other hand has shorter front bumper and incorporates a pronounced air dam below the radiator grille, which however is not present on these test mules.

2. The test mules caught here have more pronounced wheel arches as shown in the earlier pics as well, whereas the Murano has subtler wheel arches.

3. The W201 test mule has a short and stubby poise. While the Murano too boasts of a similar form, the Murano’s roof sits even lower than the mule spotted here.

One of our avid readers has spotted new test mules of the W201 doing the rounds near Sriperembadur near Chennai. The new mules seem to be closer to production and in our reader’s own words, ‘have a remarkable street presence’. The vehicles seem to have been draped with psychedelic-design camouflage vinyls, somewhat similar to the ones on the BMW test mules. Contrary to the images we had earlier, our friend claims that the test mules he spotted did not have the Daytime Running Lights (DRLs). So either the DRLs are only available on the top of the line model and the ones our friend spotted were the mid-range or base models, or the DRLs are only for the export models of Mahindra’s world SUV. The vehicle is expected to be publicly unveiled by Diwali this year with sales and deliveries commencing in January 2011. Stay tuned as we bring you more info (and hopefully updated images of the test mules) of the Mahindra & Mahindra 2011 world SUV.

To read what we reported earlier and more Spy Pics, head over to the next page>>>

What you can see here are the latest photos of the upcoming SUV from the Mahindra and Mahindra stable! Codenamed as the W201, the new SUV from Mahindra is slated for a Diwali 2010 unveiling, with deliveries commencing by this year end. With a lot of valuable inputs from our friends at Team-Bhp and other sources close to M&M, here’s what you can expect from the new SUV: 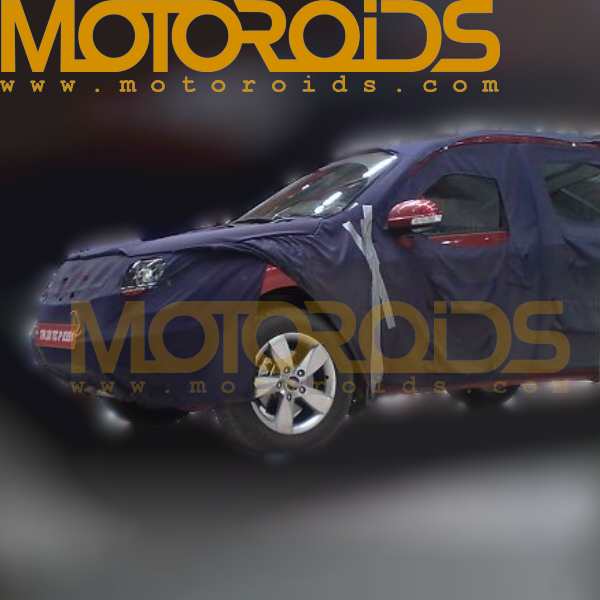 The new SUV, as you can see, has a butch stance with a low roofline, muscular body lines, flared wheel arches and large wheels. The front end of the vehicle takes heavy design cues from the Nissan Murano and the Jeep Grand Cherokee. While the vertically slotted grille with a honeycomb mesh at the back and the double-barrel layout of the internal elements of the headlights establish the Jeep Grand Cherokee inspiration, the angle of the grille’s slots, the rakish headlights and a V-shaped design shows hints of the Murano’s design. The headlights will get LED daytime running lights (DRL) which obviously won’t serve the same purpose as they do on a S-class or an A6, since the concept of DRLs is not prevalent (neither compulsory, unfortunately) in India. The ORVMs get turn blinkers on them, which is pretty much standard on today’s 10-lakh+ rupee cars. The large bumpers will get round fog lamps. The fit and finish on the exteriors gives hints towards a better feel than the current crop of Mahindras and we hope it improves further by the time the car makes its debut. The interiors too are expected to be a major departure from Mahindra’s current favorites and will get a more upmarket design to appeal to M&M’s international clientele.

As per our sources, the new Mahindra SUV borrows a lot of technology from the Ssangyong Rexton. We are told that the Rexton will lend its suspension, engine and AWD system to one of the top end variants of the W201. The entry level model is expected to be powered by the mHawk engine that powers the export model of the Scorpio. However, we are quite unsure if the new SUV will have such diversified engine options. We are however sure that the new vehicle will get some of the latest technologies like ABS, EBD, ESP, traction control, rain sensing wipers, automatic headlights, cruise control, four-way disc brakes and a six speed gearbox. 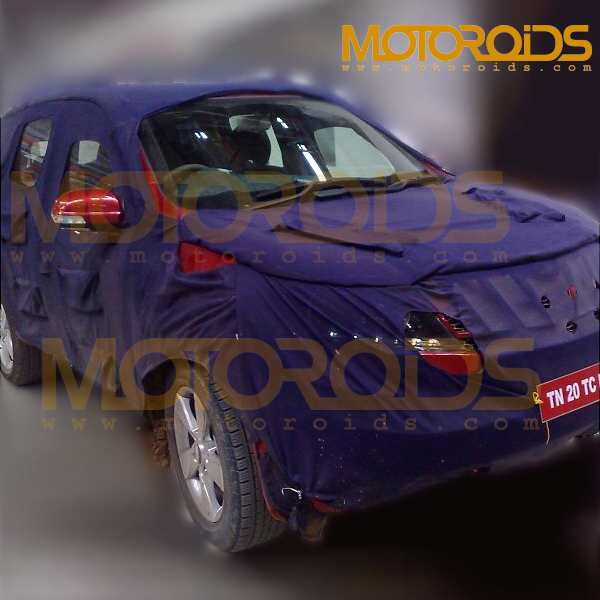 The W201 will come with LED daytime running lights on the top end model. Only for the export model?

As we mentioned earlier, the new SUV is close to being production ready and will be publicly unveiled in Diwali this year. The sales and deliveries are expected to commence by December or by latest, January 2011. With more than one variant (and an Automatic variant on the cards) the SUV will lie in a price bracket of Rs. 13 to 17 lakh. It will compete with the likes of the upcoming Hyundai ix35, the Toyota Fortuner and the Chevy Captiva. Expect this vehicle to be a butch soft-roader and not a hardcore off-raod machine. We’ll bring you more info on the car as and when we get our hands on it, stay tuned!