American auto giant, Chevrolet, is all geared up to showcase a sub-four-metre compact SUV concept at the Auto Expo 2014 next month. The new SUV is expected to ride on General Motors’ global small vehicle platform, christened Gamma 2, which also underpins latest generation of small cars from General Motors. 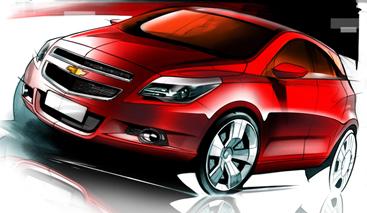 The new SUV will be pitted against the already established Ford EcoSport and Renault Duster. Powering the new compact SUV will be the same 1.3-liter diesel engine, which powers the Chevrolet Sail twins and the Enjoy MUV. Along with the new Concept, Chevrolet will also be showcasing the Beat facelift at the Auto Expo. The facelifted Beat features new bumpers, new mirrors, and re-profiled head and tail-lights.

In addition to these, a Beat painted in Manchester United colors, Chevrolet Trailblazer seven seater SUV, the all-new Corvette C7 Stingray (showcased at the 2014 Detroit motor show) and the Chevrolet Camaro will also be on display at the Chevrolet stall at the Delhi Auto Expo 2014.

Stay tuned to Motoroids for more updates on the Chevrolet compact SUV concept from the 2014 Delhi Auto Expo.