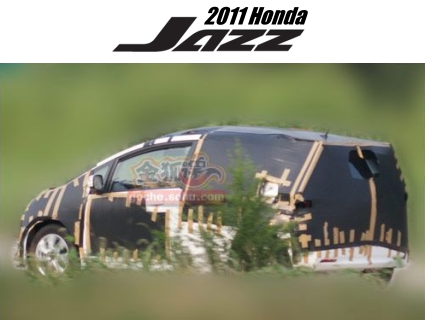 The current generation Honda Jazz was globally unveiled exactly two years back – July end 2008. What we have year now are spy shots of the facelifted model which will sell as the 2011 Honda Jazz / Fit in the ASEAN, European and American markets. The test mule seen here was caught testing in China and dons a rather clumsy looking cladding literally stuck onto the car with duct tapes! There are hoax extensions to the tailgate of the car to create some sort curiosity, but we believe it isn’t hiding anything too spectacular in there. The new facelifted 2011 Honda Jazz will have some subtle changes to its design, primarily bringing the car on par with the rest of the 2011 models sold by Honda under the same roof. The most striking difference in the front fascia would be the new radiator grille, which will trade-in its honeycomb-mesh design for a horizontally slotted one like the one seen on the 2011 Honda Accord which was recently unveiled in the US. Other changes will include ORVM mounted turn blinkers and slight design changes to the bumper and air dams.

The tailgate, as we said earlier, has fake extensions which makes the car appear like a mini MPV. The heavy cladding on the tailgate could mean design changes to the taillights. The tail too gets a new bumper with integrated reflector strips as shown in the photos. The 7-spoke alloy wheel is another change over the 5-spoke wheel available on certain Jazz variants in India, however it is subject to change for various markets. The rest of the design changes we discussed will make their way into India as well, probably by the end of this year. The facelift model will continue using the 1.2-litre i-VTEC petrol engine that powers the current model. In spite of the appalling sales figures that the Honda Jazz is attracting in India, we doubt if Honda Seil would implement a price revision for the facelift model, especially after they have officially announced that the upcoming small car (codename: 2CV) will be priced higher than the volume players in the small car segment. So if these minor design tweaks are a reason enough for you to buy the new Jazz when it comes out, then start saving right away ’cause you are going to need each and every penny that your MPV sized piggy-bank can hold. Stay tuned for updates…