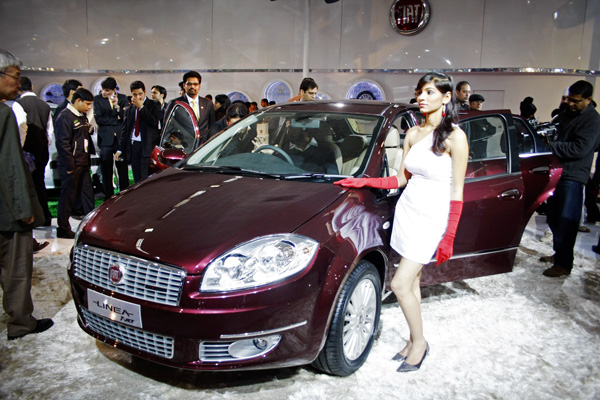 Early this year at the 2010 Auto Expo in Delhi, FIAT showcased the Linea with a turbocharged 1.4-litre petrol engine. Amongst the enthusiasts, this car is better known as the ‘Linea T-jet’ and the tagging on the grille and boot say as much. So what we have here now is a scoop video of the Linea T-jet being tested in Pune, near the ARAI facility. The new Linea is not only going to get the new 1.4-litre, 110PS, turbocharged petrol engine, but will also get a lot of other tweaks to the interiors. One of them is the new dashboard materials which have now debuted on the Punto 90HP. To know more about the new materials and see the comparative photos, refer to our FIAT Punto 90HP road test review.

The ‘T-jet’ monogram on the radiator grille

Apart from the revised dashboard, the car also gets more sound insulation to reduce noise emitted by the engine and the air conditioning units. The test car in the video had one of the officials testing some parameters with probes running into the A/C vents, close to the windshield, and on the driver window. The turbo wheeze was quite evident when the car took off from standing starts. Externally, there aren’t many significant changes. The T-jet will get the ‘T-jet’ monogram on the radiator grille and the boot lid and will run on 16-inch wheels and all four disc brakes on the top end model. Though it wasn’t too evident on these test mules, we are told that the Linea is also going to get better paint quality and finish.

Speaking of which it is being speculated that the Linea T-jet will debut in the new ‘Cool Jaaz Blue’ paint job shown above. The paint was also shown at the 2010 Auto Expo on the ‘Linea Dual Logic’. From what our sources tell us, the Line T-jet is all set for a September 2010 launch with deliveries commencing almost instantly! Though the pricing has not been disclosed to us as of now, we have been told that the Linea T-jet 1.4 is priced very competitively and will be appreciated by the consumers.

The ‘T-jet’ monogram on the bootlid