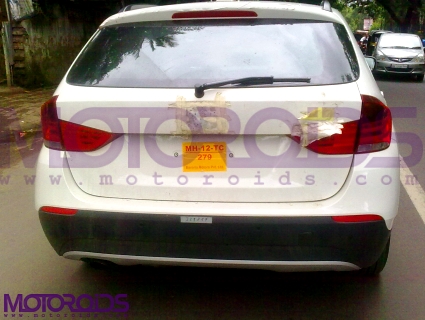 One of our avid readers, Vignesh a.k.a ‘Storm’ has got us yet another scoop! This time its a 2011 BMW X1 caught on test on the roads of Pune. The crossover is wearing no real camouflage but has the BMW monograms removed and the ‘X1’ badging taped up. But a serious Motoroid that Vignesh is, he identified the new model immediately and followed the vehicle to bring you the snaps.

BMW India’s president Peter Kronschnabl had confirmed during the 2010 Auto Expo that the X1 crossover would be launched by the end of this year. There are reports that the X1 will cost between Rs. 25-28-lakh. The vehicle will be produced at BMW’s Chennai plant and the company will invest 30% more in this facility from its current investment of Rs 110 crore to facilitate the production of this new model. BMW India will also add 30% more staff to its current headcount of 200. BMW expects this car to be a hot seller in India considering its competitive price-to-performance ratio and the Indian markets growing inclination towards the German brand. We expect BMW India to start off with the xDrive18d (1.8-litre, 142PS, diesel) and xDrive20d (2.0-litre, 175PS, diesel) variants. Stay tuned to Motoroids as we bring you more info on the X1 and its launch as and when its available to us.