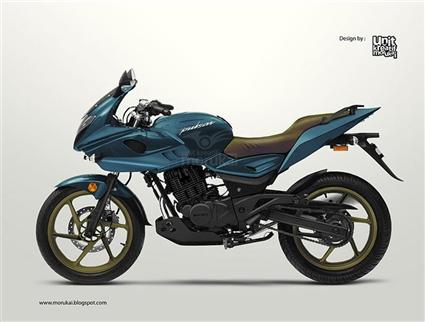 Be it the Yamaha Fazer 250 or the Bajaj Pulsar 250 / 300 / 350, the rumors, speculations and wishes just don’t stop! Now there is more dough on the upcoming 2011 Bajaj Pulsar line-up. A couple of days back we told you that Mr. Rajiv Bajaj officially announced to the media, the launch of a new Pulsar by the year 2011. He also stated that the new Pulsar will sport a new look and an engine with advanced technology.

This image has been used for representational purpose only. The original bike may vary!

Close on the heels of this reports, comes another stunner. It comes in the form of KTM’s third quarter 2009/10 financial report which reads, “In addition to the already entered KTM markets, new market opprtunities in emerging markets come along with the serial production of entry-level street motorcycles (125cc to 350cc) which will be launched in late fall 2010 in cooperation with Bajaj Auto Ltd. The first step will be Brazil, where the market offensive is already in the preparation stage.”

Now we knew about the 125cc KTMs that were showcased at the 2009 EICMA in concept form. We were even told by Bajaj that these KTM 125cc bikes will be launched in India as well and the engines will be manufactured locally. But what catches our attention now is the 125cc-350cc bracket that is being developed by both the companies. We had reports earlier that the new 2011 Pulsar flagship model is going to use a parallel twin engine. So if that report is to be believed and if the 125cc engine is any pointer towards the technology used, then expect the new Pulsar to boast of a 250cc / 350cc Parallel Twin engine with a four valve cylinder head, double overhead camshaft (DOHC), liquid cooling and fuel injection.

These engines are being co-developed by Bajaj and KTM in Mattighofen. We were told earlier than the working prototypes of the higher capacity engines (read above 125cc) were being tested in India on various chassis prototypes at Bajaj’s facility in Pune. One of our sources has confirmed that the development of the bike is going as per schedule and Bajaj is working hard on the localisation of the components to keep the price tag as low as possible for the new flagship 2011 Pulsar. Stay tuned to Motoroids as we bring you more updates on this bike as and when we have them!