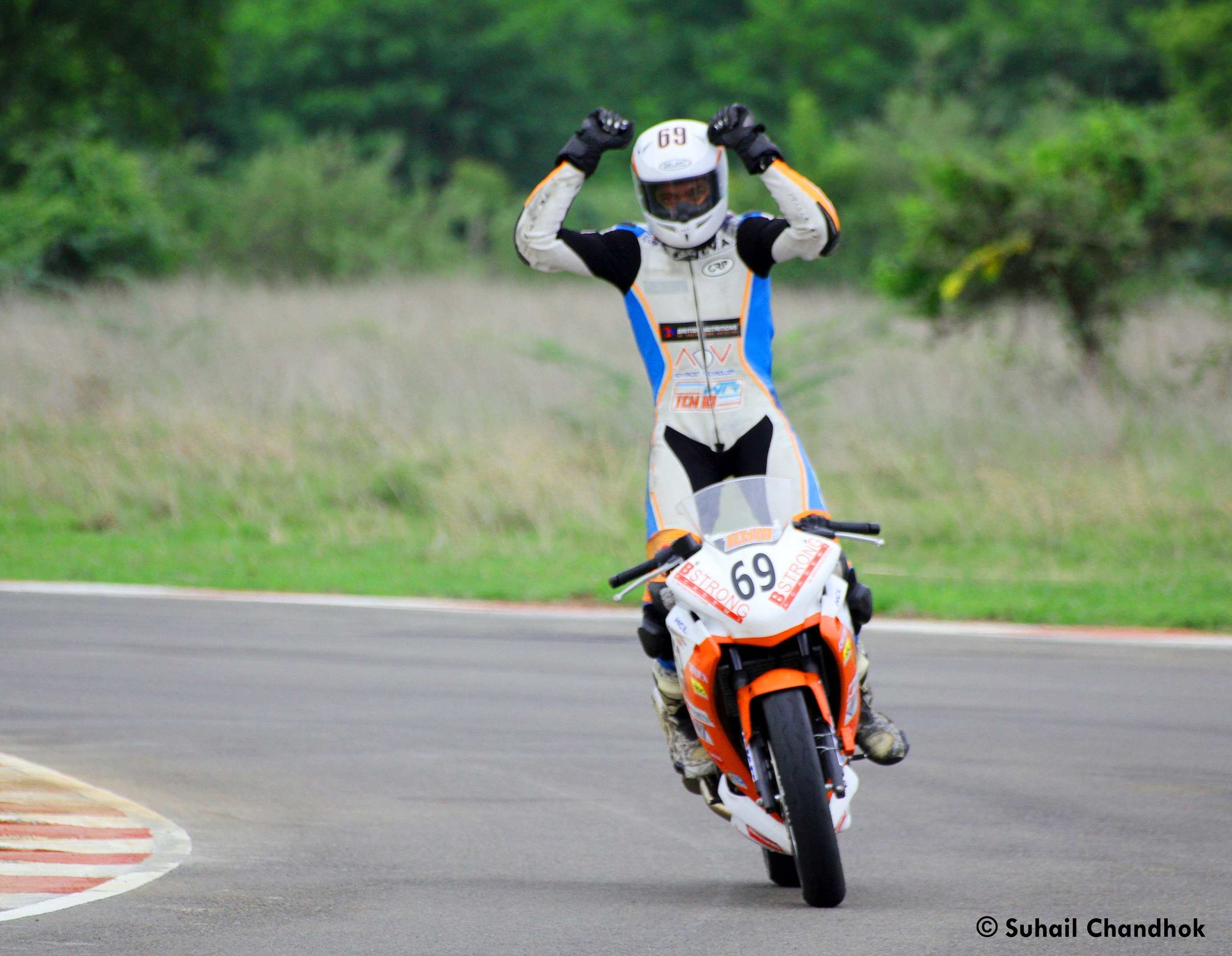 Sarath Kumar continued his brilliant form on his return to the MMSC – Sidvin FMSCI Indian National Motorcycle Racing Championship with another dominant win in the Honda CBR 250R Open category. After a layoff of nearly a year, Sarath proved that he hadn’t lost any of his magic as he blitzed the field to take another win. Sumit Lucas Toppo, Arun Muthukrishnan and K. Jagan too, proved that they were in a class of their own as they doubled their wins over the weekend here at the Madras Motor Race Track in Sriperumbudur.

An action packed day of racing with 16 races in total started with the Group D 130cc Novice category where Sparks Racing’s Kamlesh Thakur from Jalgaon took the win ahead of Chennai riders, Ramesh Kumar (MotoRev India) and K.Y Ahamed (TVS Racing). The second Group D 130cc Novice race saw a change in the top two with Ramesh Kumar this time narrowly beating Kamlesh Thakur to the finish line 5 seconds ahead of K.Y Ahamed. The Group D 165cc Novice class witnessed the notable Arun Muthukrishnan win both races with P. Sandesh and Ramesh Kumar finishing 2nd and 3rd respectively in Race 1. Not much changed for Arun in Race 2 as he took yet another win as the Chennai rider crossed the finish line 4 seconds clear of Ramesh Kumar with P. Sandesh finishing in third position this time around.

The Group B 165cc Open category also had its two races held today K. Jagan of TVS Racing rode a faultless race to take the win ahead of R. Deepak and Harry Sylvester completing an all Chennai podium. Race 2 of the category saw much of the same with K. Jagan in control once again as he won his second race of the day ahead of Harry Sylvester who made it a 1-2 for TVS Racing with Shyam Shankar completing the podium for MotoRev India.

The Honda One Make Championship with its Stunner Open category provided some close racing with 17 riders in the mix but in was a Chennai 1-2-3 again with S. Padmanabhan emerging ahead of the pack to take the flag ahead of Prativ .S and Allwyn Jebaz. The Honda CBR 150R witnessed a tight battle between the leaders with N. Abhishek of Chennai crossing the chequered flag ahead of Ranchi’s Sumit Lucas Toppo and Chennai’s Aravind Ganesh, all split by less than a second at the finish line. The Honda CBR 250R told a different story with the favourite and yesterday’s winner, Sarath Kumar of MP TEN10 Racing once again clinching top spot ahead of the MotoRev India Team duo of A. Prabhu and D. Dinesh Kumar.

The TVS One Make Championship saw 15 riders battle it out for top honours but in the end, in the Apache RTR 180 Novice category, Prashanth Kumar from Andhra Pradesh took the win ahead of the impressive Arun Muthukrishnan from Chennai and Rahul Rathod from Yavathmal. The Apache RTR 180 Open category saw a similar result to yesterday’s race with P. Ananth Raj taking his second win in as many days ahead of Rajesh Kumar with S. Padmanabhan coming home in third place after 10 laps.

The Yamaha One Make Championship saw some impressive racing yesterday and that trend continued today with the riders fighting for position right down the order. Race 1 of the YZF R15 Open category saw the top three split by less than a second with Dinesh Kumar emerging on top ahead of Vivek Pillai and Shyam Shankar.  There was a close battle on display once again in the second race of the class as Shyam Shankar this time took the win ahead of Dinesh Kumar and M. Sudhakar after 10 hard fought laps. The YZF R15 Novice category meanwhile saw P. Sandesh from Bangalore, who also impressed in Group D, take the win ahead of Maharashtra’s Rahul Rathod and Prashanth Kumar from Andhra Pradesh.

The big boys of the MMSC – Sidvin FMSCI Indian National Motorcycle Racing Championship, the Group A 600cc Superbikes, threw up a surprise as championship leader and favourite, K. Rajini crashed out of the lead early in the race, leaving R. Deepak of Preethi Racing and M. Gautham of MotoRev India battling for the win. Deepak held of the charge from Gautham as Harry Sylvester completed the podium making it a good day out for Team Preethi Racing.

The MMSC – SIDVIN FMSCI Indian National Motorcycle Racing Championship returns to the MMRT in Chennai in three weeks time after this scintillating weekend of motorsport which witnessed a total of 23 races and close to 250 riders competing for top honours.