Nine out of ten Bollywood movies made during the ’70s, ’80s and ’90s featured crazy car chases. Most of the times it would be a rickety Jeep with an overzealous Police inspector leaning out and shooting at the car ahead. He was such a resourceful man, he could shoot at least a hundred times without re-loading, from a revolver which only could store 6 bullets. These days Bollywood doesn’t make too many movies which feature car chases like those. So our actors have to buy their own set of wheels to satiate their need for speed. 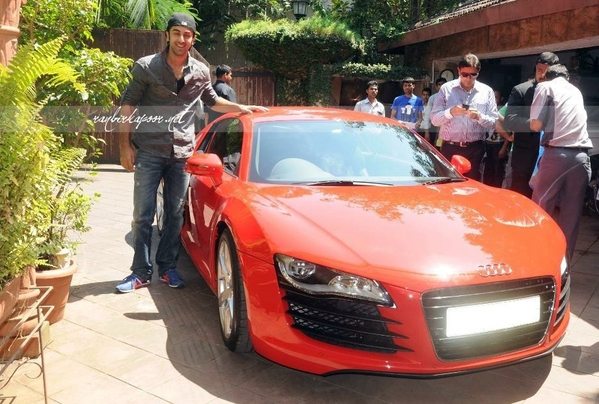 Ranbir Kapoor’s Audi R8 is a part of his fleet of cars which include an Audi A8, a Range Rover and a Gangsta G63. He has been using his other cars frequently, and as a result, the R8 has been sitting stationary in his garage. He has been trying to find a buyer for the red car, however, he wants to sell the car to a person who can take good care of the Audi. Unfortunately, he hasn’t been able to find such a buyer. His Red Audi R8 is reported to be a 4.2 litre V8, feel free to contact him if you are interested in the purchase, just remember, he wouldn’t sell you the car for the cost of 1kg barfi.