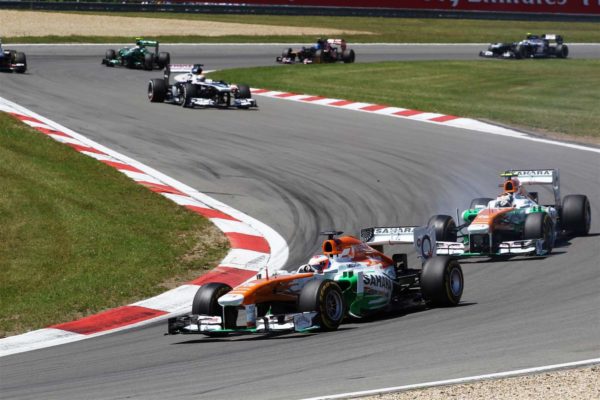 Sahara Force India just missed out on points as Paul Di Resta and Adrian Sutil raced to P11 and P13 respectively in today’s German Grand Prix at the Nurburgring.

Paul: “It’s not been the easiest of weekends for us, but in the final part of the race it looked like we were on course to score some points. In the end we just ran out of tyres during the last couple of laps, but it was always going to be risky with our two-stop strategy, especially as we had to pit under the safety car. There were times in the race when the car was working well, but I really struggled with the first set of mediums and was not happy with the balance. Things improved quite a bit for the final stint, but by then we were out of position. It’s a bit gutting to miss out on points so we need to unleash our potential and get back to our usual form in Hungary.”

Adrian: “It turned out to be quite a disappointing race and for whatever reason we’ve just not had the pace this weekend. I struggled a lot with the tyres and had to convert from a two-stop race to a three-stop race, which was not our plan. I also lost some time at my final pit stop and after that the points were just too far away.”

Robert Fernley, Deputy Team Principal: “It’s disappointing to end our run of points finishes, but Paul came very close to picking up the final point today. Ultimately his two-stop strategy wasn’t quite enough to fend off our competitors in the final few laps, but we came close to pulling it off. Adrian’s race was also decided by tyre wear because we had to switch him to a three-stop strategy mid-way through the race. Overall we were missing some performance and didn’t have the pace to make the strategy work. Both Paul and Adrian were unable to pass the Williams of Maldonado after the safety car, which compromised the strategy. With three weeks until the next race and a young driver test before that, we will work hard to ensure we can recapture the form we’ve shown earlier in the season.”