If this latest rumor is to be believed, Hero MotoCorp, India’s largest selling bike maker, has planned to launch a new dirt bike for the Indian market. This news comes from a little known blog called Gadget Lite, which has come up with what they claim to be exclusive pics of this upcoming motorcycle. However, before you decide to get excited about this bike, let us warn you that we aren’t yet sure of this blog’s credibility and even these pics seem to have too much of Adobe Photoshop in them!

What seems to be even more ridiculous is the power source for this speculated motorcycle. As per the chaps at the aforementioned blog, powering the Hero Sparkle would be a two stroke 80cc engine that will have a max power of just 3.5 KW (4.7Ps). Now, Hero bikes are not known for industry leading power figures but just 4.7 PS? That’s just too less to digest. What’s more, it has been ages since Government laws spelled the demise of two stroke engines. Given all this, there are only two possibilities. Either all this is a fragment of someone’s rather vivid imagination or Hero is indeed planning to launch this motorcycle but as a lifestyle product meant for recreational clubs and other such enterprises.

It may be noted that Hero MotoCorp has already tried its hands at the off road bike segment and has a 150cc off road bike in its product portfolio. This bike, the Hero Impulse, is loosely based on the Honda NXR 150 Bros and is powered by a retuned version of the same engine that is found powering the CBZ Xtreme. The Hero Impulse hasn’t really taken the sales charts by storm and the aforementioned blog states that with the launch of the Hero Sparkle, the popular bike maker will be trying to get a better response from the market. It is being said that Hero Sparkle price in India would be pegged around INR 50,000.

However, let us just wait and watch for the turn of events regarding the Sparkle launch.

What do you say about this latest rumor? Could Hero be really planning to launch such a product in the fast developing Indian Two Wheelers market? Do share your thoughts by penning them down in the comments section below. 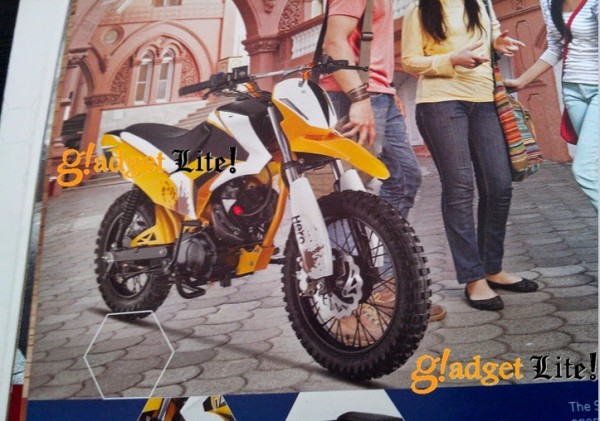