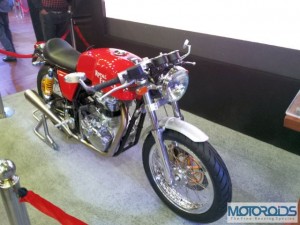 The boffins at Royal Enfield are surely working hard to have an even better showing on the sales chart. The bike maker, which recently launched the Bullet 500 to attract more customers with its old world charm, plans to further expand its portfolio in near future.

However, in a recent development, it has emerged that the bike maker intends to continue using engines displacing 250- 650cc for at least next five years. The source of this information is a comment by Mr Siddhartha Lal, the CEO of the Eicher group. It may be noted that the Eicher group is the owner of Royal Enfield brand of motorcycles and the recent decision by Mr. Lal is based on the fact that Royal Enfield caters to 250cc-650cc segments of some export markets and the manufactuer wishes to continue focussing on these segments rather than coming up with a high performance motorcycles.

Thanks to the recent comment, it would be safe to assume that V-Twin or parallel twin engines from the much publicized retro bike maker are still some years away. This would mean that Royal Enfield motorcycles won’t be seen battling it out against the Triumphs and the Harleys anytime soon.

The entire range of Royal Enfield motorcycles is powered by 350cc or 500cc single cylinder UCE motors. RE will also be seen launching the much hyped Royal Enfield Continental GT 535 cafe racer in near future. This bike will be powered by a 535cc engine that will have more power and torque than the 500cc mill. The Continental GT 535 will also benefit from a bigger throttle body for the engine and will be considerably lighter than the 500cc bikes from RE.