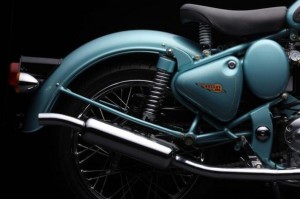 This is a kind of problem everyone would want to be in. Royal Enfield seems to have hit the Bull’s Eye with the Classic. The bike is selling so well, the company has run out of capacity to meet the demand. And that’s not exactly because they cannot produce enough motorcycles, but because they cannot get the produced motorcycles painted! There is a waiting period of as much as 6 months for the bike, as the demand of 6500 bikes is surpassing the production capacity of 4500 bikes.
The Classic, it seems, takes more time to be painted than its usual Bullet and Thunderbird counterparts. So now the company is looking at options to get the machine painted at some other manufacturer’s plant.
“It is a difficult situation and we are looking at a variety of options to get over this problem,” Mr R. L. Ravichandran, CEO, Royal Enfield said according to Hindu Business Line. “In fact, our bigger problem is meeting the demand for the Classic model, which uses a unique paint and painting process. The in-house capacity is just not able to satisfy the demand. We have a six-month waiting period as of now,” he said.
The company is reported to have found a solution by passing some of its painting job to the Ahmednagar paint shop of Mahindra Kinetic two-wheelers which seems to have some spare capacity to paint vehicles.
The company as one would expect, is looking at long term solutions for the problem, but such a solution will take some time in being implemented. Mr Ravichandran, said the company is working at ways to overcome the present supply crunch. “There is only so much this plant can take, but it is not as if we can just start producing motorcycles overnight in a new facility,” he added.
The Classic, even with its relatively sluggish pace is a big hit not just in India, but in the US and the UK as well, owing to its retro styling and legendary heritage.