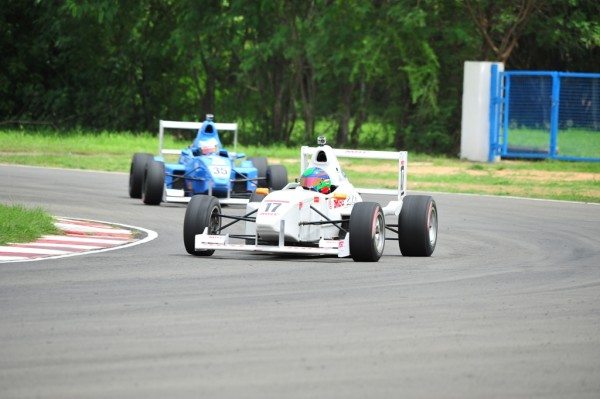 Motorsport action resumes this weekend with Round 4 of the 17th MMSC-FMSCI National Racing Championship, powered by MRF Tyres, to be held this weekend in Chennai on August 24-25. Round 3 of the action saw 15 year old Tarun Reddy creating history in the MRF 1600 and he returns to challenge championship leader Ashwin Sundar. In the Indian Touring Car category contenders Arjun Balu and N Leelakrishnan will resume their battle after being upstaged by Rallying Ace Gaurav Gill, who made a one-off appearance. This weekend promises non-stop motorsport action for speed junkies as India’s leading Single-seater and Sportscar drivers battle it out for supremacy at the MMRT with races in the MRF 1600 category, Indian Touring Cars (ITC), Indian Junior Touring Cars (IJTC), and Formula LGB4 & Formula Swift.

FMSCI President Vicky Chandhok commented, “At the halfway point of the MMSC-FMSCI National Racing Championship thing s are getting very exciting with close battles in both MRF 1600 and Indian Touring Cars. MRF and JA Motorsports have done a fantastic job in preparing the 1600 cars for upcoming talent in India. This is a perfect springboard for any young driver looking to further his career. The ITC is the best Sportscar championship in the country and with the addition of Volkswagen Vento we are looking for more manufacturers to get involved with the championship. Looking forward to yet another great weekend of racing ahead of us.”
Ajit Thomas, President, MMSC, was happy to see the progress made in the National Racing Championship. He commented, “We are all looking forward to an exciting round of racing this weekend. As we are halfway through the season I must thank our partners, competitors, teams for putting on a great show and always raising the bar. If you look closely at all the categories the cars are getting faster and faster with lap records being broken. I am sure the second half of the season will see the competition getting more fierce and teams pushing their cars to the limit. This is a perfect platform for young drivers looking to make a career in both single-seaters and sportscars.“

In the MRF 1600 category, Ashwin Sundar continues to lead the championship but his main rival behind is now the 15 year old Tarun Reddy, who took a historic win last round. The battle between this two promises to go down to the wire with both having to push hard to come out on top. Add the Japanese drivers to the equation and you have a great battle in the making. The Japanese drivers Yudai Jinkawa, Shinya Michimi & Kizuki Hirota are all giving the Indian drivers a run for their money with their consistent top 5 finishes. Race 1 of the MRF 1600 will take place on Saturday with race 2 taking place on Sunday.

Mr. Arun Mammen, Managing Director, MRF Tyres, said, “We are very proud of the grid we have for the MRF 1600 category this year. It is a perfect blend of experience, youth and international exposure. The Japanese drivers are bring so much to the championship that our local drivers are having to dig deep to beat them. This is exactly what we want and we are doing everything to ensure these drivers push as hard as possible.“

The ITC category is turning out to be one of the closest championships in years with a mere 9 points separating leader Arjun Balu and seasoned campaigner N. Leelakrishnan. V Ramnarayan, is also in contention being only 20 points off the leader. Arjun Balu switched from his regular Honda City and debuted his Volkswagen Vento for the manufacturer’s first ever entry into the ITC category. He had some initial problems but should be back to his best this weekend and try to get back to winning ways.

In the IJTC category, championship leader Feroze Khan has looked in unbeatable form after winning 5 out of the 7 races completed. It will take something really big to knock him off the top step. Feroze is yet to lose a race in Chennai winning all 5 races at the MMRT. While Raja Rajan is comfortably ahead in the second place the battle for third is close. Sreeram, Charen Chandran and Ashish Ramaswamy are separated by 3 points and will be looking to move ahead this weekend.

In the Formula LGB4 category S Narendran is yet to be beaten as well after winning every race this year. He is looking to continue his winning run as we head in to this weekend’s round. The Formula Swift category is hotting up with the top 5 all in with a chance to win the championship. The battle for the championship lead is tight with Dipak Paul Chinappa and Prashanth K separated by 4 points. Prashanth won all three races in the last round and will look to continue his good run of form. Sriram S, who was leading the championship heading into Round 3 has dropped to third place with a unlucky run in the last round. Inesh Singh and Rahul Rangaswamy are not too far behind in 4th and 5th place respectively.