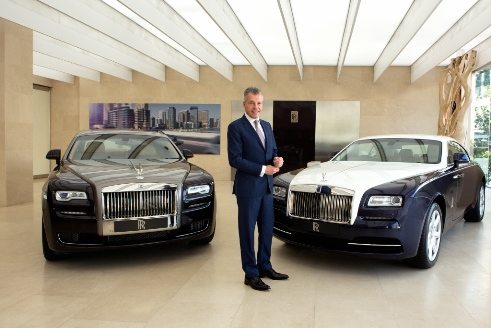 Rolls-Royce Motor Cars has today revealed record sales results for a fifth consecutive year, with 4,063 cars sold globally during 2014. This result means that sales have more than quadrupled since 2009. Strong sales were reported worldwide, with double-digit growth in most regions – North America (up 30%), the Middle East (up 20%) and Europe (up 40%). The United States remained the company’s most significant individual market. Rolls-Royce’s home market, the United Kingdom, is the company’s fourth largest individual market (up 13%).

Europe saw strong growth in a number of markets with Germany up by 30%, while in Asia Pacific, Australia grew by 75%, Japan by 60% and Korea 20%. In the Middle East, highlights included Bahrain (up 50%), Kuwait (up 45%) and Oman (up 27%). Emerging markets such as Azerbaijan, Kazakhstan and Vietnam all showed promising growth.

The best-selling Rolls-Royce dealership in 2014 was Rolls-Royce Motor Cars Abu Dhabi. As part of the marque’s commitment to long-term sustainable growth, six new dealerships were opened in 2014, including Mexico City, Calgary, Canada and Gold Coast, Australia. A total of 127 dealerships are now in operation and further expansion is planned for 2015.

Torsten Müller-Ötvös, Chief Executive Officer, Rolls-Royce Motor Cars said, “This fifth consecutive record year saw Rolls-Royce Motor Cars break through the 4,000 car sales level for the first time in its 111-year history. The result confirms that our strategy of balanced, sustainable and profitable growth is delivering and that Rolls-Royce remains the world’s leading luxury goods brand. This extraordinary success has been built on strong foundations: pinnacle products, dedicated people and a commitment to ensuring a balanced global sales picture.”

Sales were driven by strong orders for Ghost Series II, launched in November, and Wraith, which enjoyed its first full year of sales, while the Phantom remains the company’s pinnacle product. Bespoke Collections including Waterspeed, Pinnacle Travel and Metropolitan, and unique creations such as the Maharaja Phantom Drophead Coupé contributed to Rolls‑Royce sustaining its leadership of the industry in the area of individualisation. In 2014, Rolls‑Royce once again sold more cars in the +Euros 200,000 net segment than any other manufacturer.

2014 also marked the first year in which every Phantom, and the great majority of Ghost and Wraith models, left the Home of Rolls-Royce at Goodwood in West Sussex, England with significant Bespoke personalisation. A record number of customers spent personal one-on-one time with Rolls-Royce’s Bespoke design consultants commissioning their personalised vehicles. To meet such strong demand, particularly for Bespoke cars, the company has created over 200 new permanent jobs in the past 18 months. More than 1,500 people are now employed at the Home of Rolls-Royce.

Further evidence of Rolls-Royce’s commitment to expansion in Great Britain came in September when the company announced plans for its new Technology and Logistics Centre at Bognor Regis, close to Goodwood. Construction of the new 30,000m2 facility, which is due to open in 2016, is well underway and around 200 new and existing staff in technical and logistics roles will be employed at the Centre.

Business Secretary, Vince Cable said, “Rolls-Royce motor cars are famous throughout the world with increasing numbers now exported abroad. The skill and dedication of its workers here in Britain has led to another very successful year. The UK’s automotive industry is thriving with a new car rolling off the production line every 20 seconds, and increasing levels of investment that’s helping to secure local jobs. Through our industrial strategy we are backing companies like Rolls-Royce Motor Cars as they go from strength to strength, giving them the right environment to invest with confidence and create high-skilled jobs”.