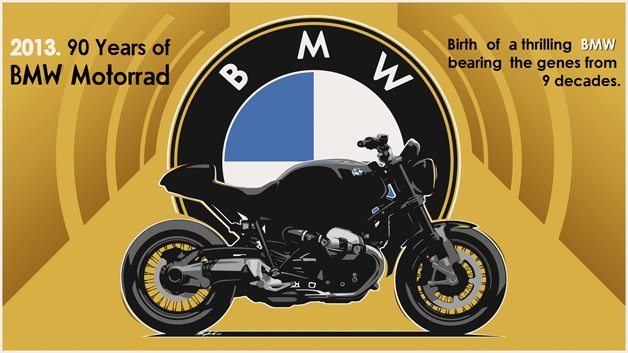 At the EICMA show in Milan, BMW Motorrad President Stephan Schaller announced that BMW Motorrad will be presenting a new model with air-cooled ‘boxer’ engine in 2013 as a special way of marking the “90 years of BMW Motorrad” anniversary.

As long ago as 1923, the very first BMW motorcycle – the BMW R 32 – provided what was to become the genetic basis for the BMW Motorrad boxer series over nine decades: an air-cooled, 2-cylinder 4-stroke ‘boxer’ engine with longitudinally mounted crankshaft and shaft drive to the rear wheel. Always combined with innovative technology and thrilling design – and with one priority above all else: sheer riding pleasure.

The new, distinctive motorcycle to be produced next year will express the genes of 90 years of BMW Motorrad combined with emotional styling and innovative technology to create a new, multifaceted vehicle concept.

The model designation and date of the market launch will be announced at a later date.