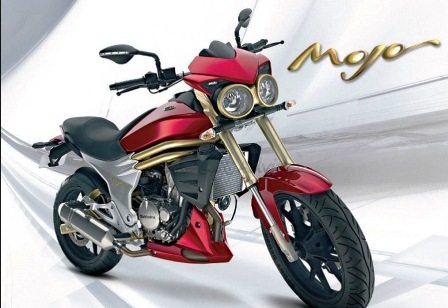 Our regular readers would know that we just can’t stop talking about the fact that the entry level performance bike segment of Indian bike market is buzzing with activity of late. We already have seen the much publicized Kawasaki Ninja 300 and the KTM 390 Duke coming to us and with bikes like the Pulsar 375 coming our way, future is sure to be even brighter.

Also, in all probability, the trio of performance bikes from Bajaj isn’t the only reason for us to be happy about. Also coming our way is a home-grown performance bike from one of the latest players in our highly competitive bike market.

You would remember that Mahindra Two Wheelers stepped into our industry with quite a bang by unveiling the Mahindra Mojo 300 performance bike almost three years back.

The Mojo grabbed a lot of eyeballs and was in news for several days, which doesn’t really comes across as surprising. Suddenly, here was a performance bike, from a renowned auto group, that aimed at giving some sleepless nights to the makers of popular Indian performance bikes.

Many speculations later, it emerged that the Mojo is still sometime away from making it to production.

We recently reported that it is being said that the Mojo 300 would be launched with an all new styling, which would be very dissimilar to the styling of the Mojo 300 prototype that we all saw earlier. Now, our friends at TeamBHP are saying that the restyled bike would sport a full fairing. This doesn’t come across as a surprise, considering that faired bikes have always found favor from the bike buying lot. We feel that the decision of endowing the bike with an all new styling package is good move, especially because the current styling, which has been borrowed from the Malaguti MR250, comes across as uninspiring and a tad ordinary in this day and age.

Mahindra hasn’t yet confirmed if the Mojo is in the process of getting a makeover. The reason for the delay in launch, as cited by the bike maker, is that unlike earlier, the Mojo’s engine is now being developed in-house and the auto group needs some time to tune it to perfection.

Whatever the case might actually be, we just want the final product to justify this seemingly never-ending wait.