Every petrolhead chap must have loved and wanted to own a Ducati Diavel once in his lifetime. But high price and cost of maintenance kept it out of reach of many. However, this dream might come to reality only with a small exception. It won’t be a Ducati.

Hyosung Motors has been present in India since it launched the Comet in partnership with Kinetic. However, the company did not make its mark then due to its product pricing. It again made its entry into the Indian market with its GT250R and GT650R. However, lack of service network and unavailability of spare parts again let the company down. 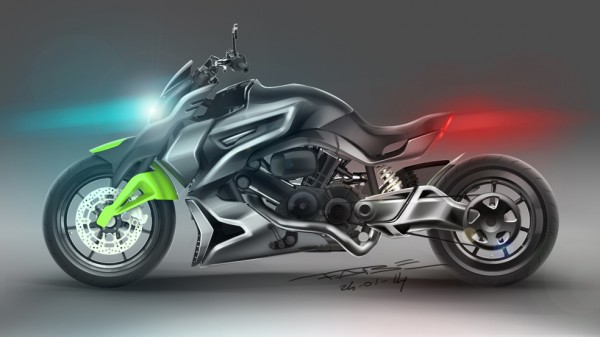 But now, things are about to change. After getting into partnership with DSK, Hyosung has launched six products. The GD series is also expected to hit the showrooms soon. However, the motorcycle that’s making news is the Hyosung ST7 Power Cruiser concept that is being showcased through internet images and videos.

The images that were released over the internet showcase the new power cruiser from Hyosung. This new motorcycle is heavily inspired by Ducati Diavel. However, the powermill in this new Hyosung will be the same 678cc liquid cooled L-Twin that is found on the current ST7. The digital renderings show the sharp styling that Hyosung is planning to incorporate into its new power cruiser. The motorcycle will also don a exposed fat rear tyre as found in the Diavel. Hyosung might also add a single sided swing-arm in its new power cruiser.

This new concept motorcycle, when launched, will provide for price conscious Indian audience who crave for better looking machines. If the rendering is to go by, the new power cruiser from the Korean manufacturer will definitely be a head turner in budget.