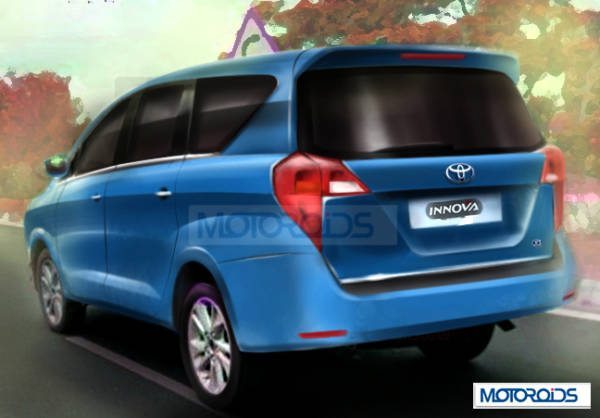 One of the biggest launches for next year will be the all-new 2016 Toyota Innova. Prototypes have already been spied in the country, and based on those, we have a rendering of the upcoming 7-seat MPV’s rear 3/4th view. The next generation models of the Toyota Innova and Toyota Fortuner will be based on a new platform called Toyota New Global Architecture (TNGA), analogous to the highly versatile MQB platform from Volkswagen, which allows increased flexibility in platform sharing across the brand’s range.

The exteriors will also undergo a complete redesign, with every panel being all-new. The 2016 Innova will be a pleasing car to gaze at, with the exception of the front end, which might end up getting a little aggressive from whatever the spy pictures tease. The sides will have a weak shoulder line, and mildly flared wheel arches. Overhang at the rear will be longer than the current model, which should hopefully translate into a roomier third row. The rear quarter glass area post the C-pillar has been extended and the thick D-pillar cuts it diagonally. Double layered tail-lamps, an integrated rear spoiler and a deep opening tail gate should round things up.

One can expect an improved cabin design with more premium features and materials. These will include a redesigned dashboard and even a touch-screen centre. The Innova’s USPs like comfort, car-like driveability and space for seven will definitely be retained with the next-generation model, which might continue using the same 2.5 liter, 102PS diesel engine, albeit with more refinement and better NVH levels overall.